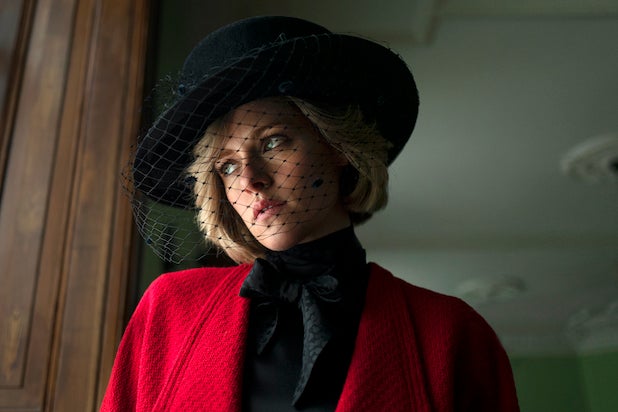 Fans got a first look at Kristen Stewart as Princess Diana from her new film “Spencer” on Wednesday. The film, directed by Pablo Larraín, focuses on the one weekend when Diana decided to leave her marriage to Prince Charles. Spencer was her maiden name before she wed the British royal.

Principal photography has begun on the film, with shooting taking place in Germany and the UK. And Neon is expected to release “Spencer” later this fall ahead of the 25th anniversary of Princess Diana’s death in 2022.

The first look, which you can see above, shows Stewart peering out a window behind a black hat with fish-net veil. With her short blonde hair, Stewart’s resemblance to Diana is striking.

“Spencer” is set over a Christmas holiday in December 1991 when Princess Diana is with the royal family at the Sandringham estate in Norfolk. Here’s the full synopsis:

December, 1991: The Prince and Princess of Wales’ marriage has long since grown cold. Though rumours of affairs and a divorce abound, peace is ordained for the Christmas festivities at Sandringham Estate. There’s eating and drinking, shooting and hunting. Diana knows the game. This year, things will be a whole lot different.

Kristen Stewart stars as Princess Diana in “Spencer” alongside Timothy Spall, Sally Hawkins and Sean Harris. The film is directed by Larraín, who transformed Natalie Portman into Jackie Kennedy for the film “Jackie,” and written by Steven Knight, known for “Peaky Blinders,” “Locke” and “Dirty Pretty Things.”

“‘Spencer’ is a dive inside an emotional imagining of who Diana was at a pivotal turning point in her life. It is a physical assertion of the sum of her parts, which starts with her given name; Spencer,” Stewart said in a statement describing the film. “It is a harrowing effort for her to return to herself, as Diana strives to hold onto what the name Spencer means to her.”

“We are extremely grateful for the support of our distributors worldwide, our partners and funders who have shown tremendous commitment to us in these extraordinary times. With Kristen Stewart, Steven Knight and the rest of our fantastic team both in front and behind the camera we are bringing ‘Spencer’ to the world. It is an independently produced film made for the big screen about an iconic woman’s own declaration of independence. We couldn’t be more excited,’ the producers and the director said in a joint statement.