Octavia Spencer made headlines on September 12 when she took to Instagram to comment on Britney Spears and Sam Asghari’s engagement. According to Page Six, “The Help” actor posted a comment on Spears’ engagement announcement, encouraging the pop star to make sure that Asghari signs a prenuptial agreement before she marries him. “Make him sign a prenup,” Spencer’s comment read. She didn’t post anything further, nor did she congratulate the couple — but her comment received quite a bit of attention. The main reason is because Spears has been fighting her father and trying to free herself from a 13-year conservatorship that has controlled nearly her every move — both personally and financially — and fans don’t want to see Spears in any kind of vulnerable position in the future.

While Spencer may have been coming from a good place — and many people agreed with her –  the comment went viral. And it even got Asghari’s attention. “Thank you everyone who is concerned about The prenup! Of course we’re getting iron clad prenup to protect my jeep and shoe collection in case she dumps me one day,” he wrote on his Instagram Stories, according to Entertainment Weekly.

Days later, Spears deleted her Instagram account. The reason? She tweeted that she just wanted to take a break from social media and enjoy her engagement. However, on September 15, Spencer posted a public apology, of sorts. Keep reading to find out what she said — and why. 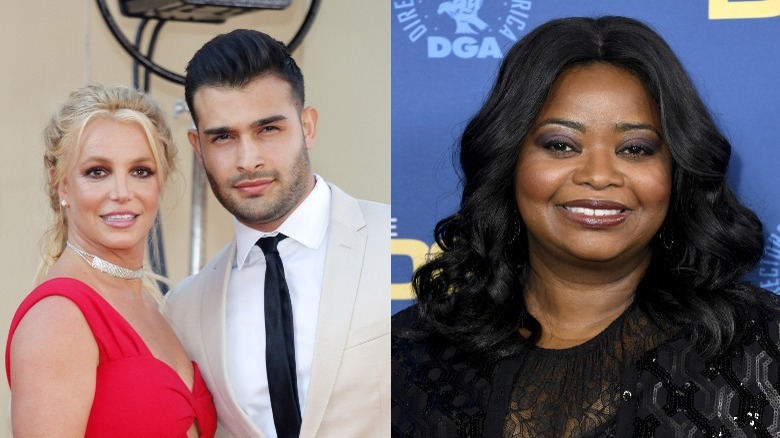 Octavia Spencer took to Instagram on September 15 to reveal that she reached out to Britney Spears and Sam Asghari privately after her comment on their engagement announcement went viral. Spencer said that she wanted to apologize to the couple. “Y’all, a few days ago Sam and Britney announced their engagement and me being me I made a joke. My intention was to make them laugh not cause pain. I’ve reached out to this lovely couple privately to apologize and now want to restore just a smidge of happiness they were robbed of. Britney’s fans have seen her through a lot of pain and she’s found happiness. We’re thrilled for her. So let’s show them love,” she captioned a photo of Spears and Asghari.

Asghari took to the comments section of the Instagram post to let Spencer know that he isn’t upset with her for any reason. “You are very kind to clarify but i have no hard feelings whatsoever. Jokes and misconceptions come with the territory,” he wrote. Spears is still not on Instagram, so she couldn’t comment on Spencer’s post, but it sounds like there are only good vibes between these three.