The Voice kicked off the first live shows of season 20 on Monday, as each of the the Top 17 artists performed a brand new song, in the hopes of making it through to the next round.

The live shows also mean coaches Blake Shelton, Kelly Clarkson, John Legend and Nick Jonas are done sending artists home — viewer voting will determine which of the Top 17 will get to move on to the Top 9 and then to the finals, to compete for the season 20 crown.

Fans can vote for their favorite singer, and for Tuesday’s Instant Save, by using The Voice‘s official app, or on NBC.com/VoiceVote.

ET had a chance to speak with each of the artists, alongside their teammates, just after the live show on Monday, where they opened up about their journey on the show so far. 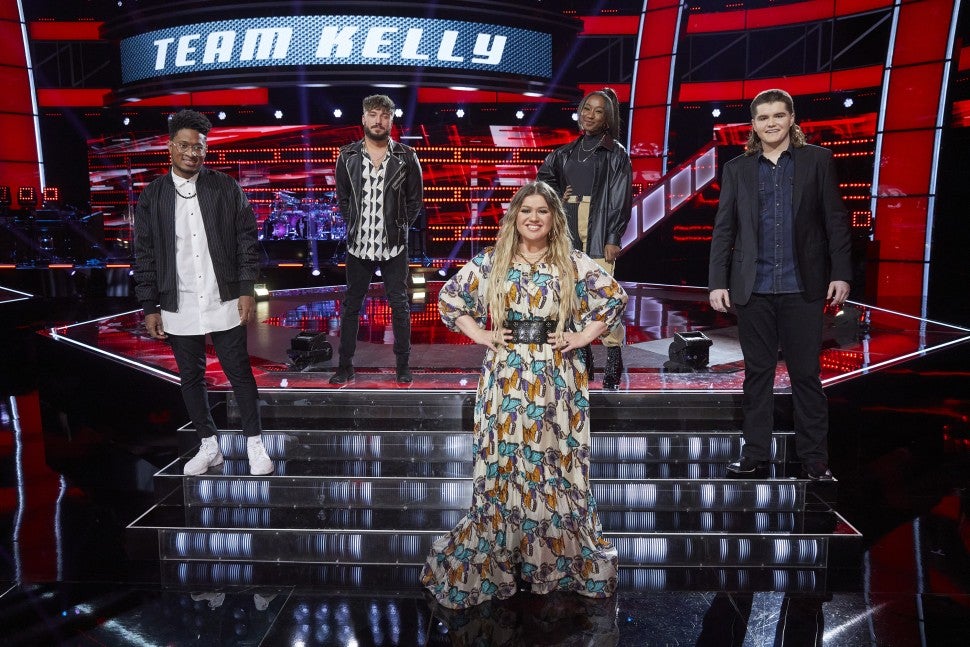 For Kelly’s team, it’s all about technicality. As a former vocal competition winner herself, all of Team Kelly’s singer noted how their coach instructs them on the specifics of their performance, from breath control to emotional presence on stage.

Zae Romeo explained that Kelly as a coach is “very technical,” and helps break down “all that cool stuff that you can add to a song to make it better,” while Corey Ward added that Kelly has taught him “to stay passionate….[It’s] not only the way you approach [the song], but the emotion, passion, telling that story.”

For Gihanna Zoe, Kelly has helped on the other side of the equation. “I think the best advice she gave me — I’m a very technical singer — was while keeping that in mind, don’t lose the story behind it,” she noted. “The best singers have the technique, but they’re not only focused on that. They’re focused on making the audience feel something.”

And self-described “country boy” Kenzie Wheeler praised his coach for helping him showcase his talents on The Voice‘s national stage. “I don’t go out of my comfort zone a lot and sing those higher parts,” he admitted, “but that’s what she kind of coached me to do. She’s just a wonderful person.” 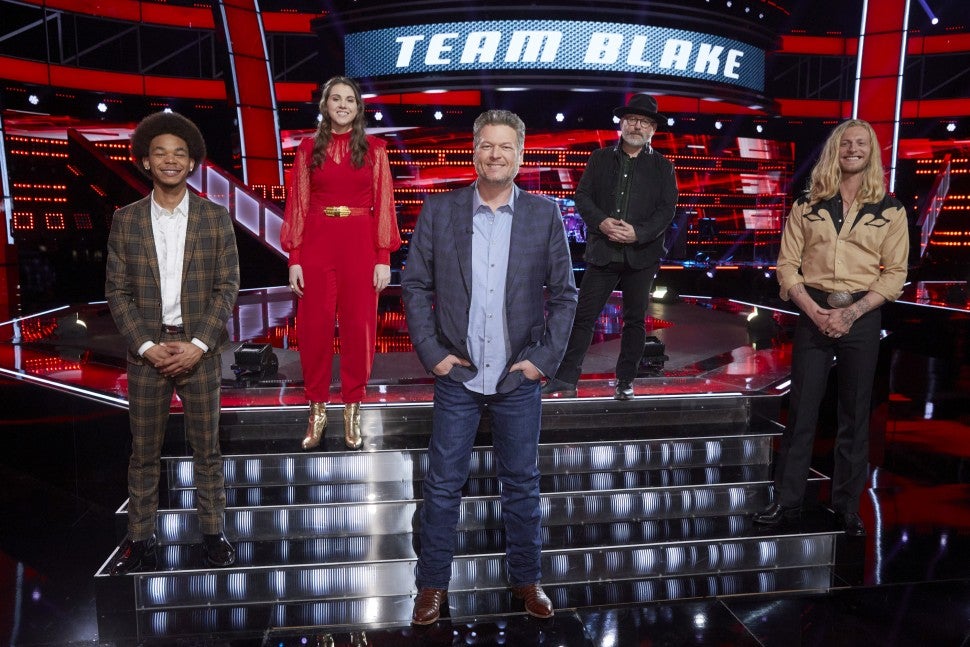 Over on Team Blake, things seem to be a little more more “laid back.” Cam Anthony noted that The Voice‘slongest-tenured (and winningest) coach “definitely creates a great environment for you to come through and do your thing.”

“He really fosters you being an individual and an artist and lets you stay in your lane, in your pocket,” Pete Mroz agreed. “He validates those feelings that you have about the song, and it’s really cool that he kind of steps back and lets you be an artist.”

For Anna Grace, the newest member of Team Blake following a Knockout Round steal, the goal during her first live show performance was to make her new coach proud. “He’s super laid-back…overall, he just really wants you to be comfortable and confident and do your best on stage.”

And Jordan Matthew Young felt like the laid-back vibe of Team Blake means that each artist is right where they’re supposed to be. “Blake knows exactly what he likes and what he doesn’t like, and I think that’s why we’re all on this team,” he observed. “He heard in all of us the kind of thing that he’s into and maybe some cool ways he could mold us by giving something a little out of our wheelhouse, but not too far. He wants you to be comfortable, wants you to do what you do best.” 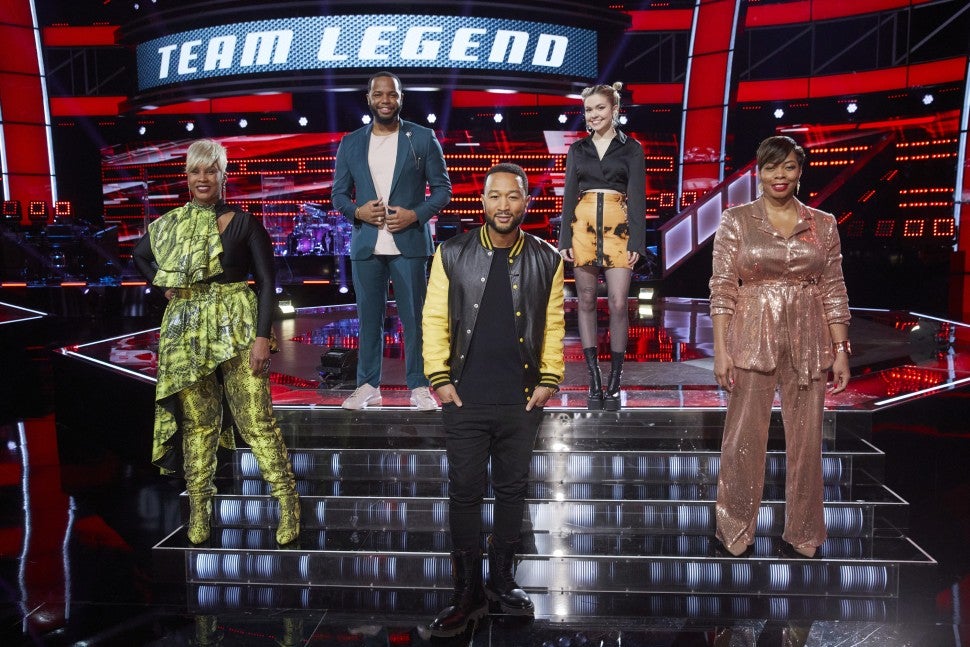 For Team Legend, the coaching magic goes beyond their now-infamous introductory song. Working with the EGOT winner means access to his massive musical knowledge, which Pia Renee said she “definitely draws from.”

“He’s very gracious and laid-back and he’s always authentic in terms of always being in a space where he can create without being internally inhibited,” Pia added of her coach, also noting that John taught her “how to smile in picture properly!”

Zania Alake said she and John spent time working on breath control, “how to push out those high notes, those strong notes,” while Team Legend newcomer Ryleigh Modig said she found that opposites attract while working with her new coach.

“I feel we have kind of a similar mindset, in an odd way,” she noted. “We don’t have any of the same kind of tastes, but we do — I don’t know how to explain it, but he gets my brain!”

For Victor Solomon, a creative push from John helped take his Top 17 performance to another level. “I was kind of going into this round with my own mindset about what I wanted to do with my song,” he recalled. “John, as a coach, he was really honest with me and my ideas, and I’m really glad that I took the advice that he gave me about changing the key so that it shows a different part of my voice.” 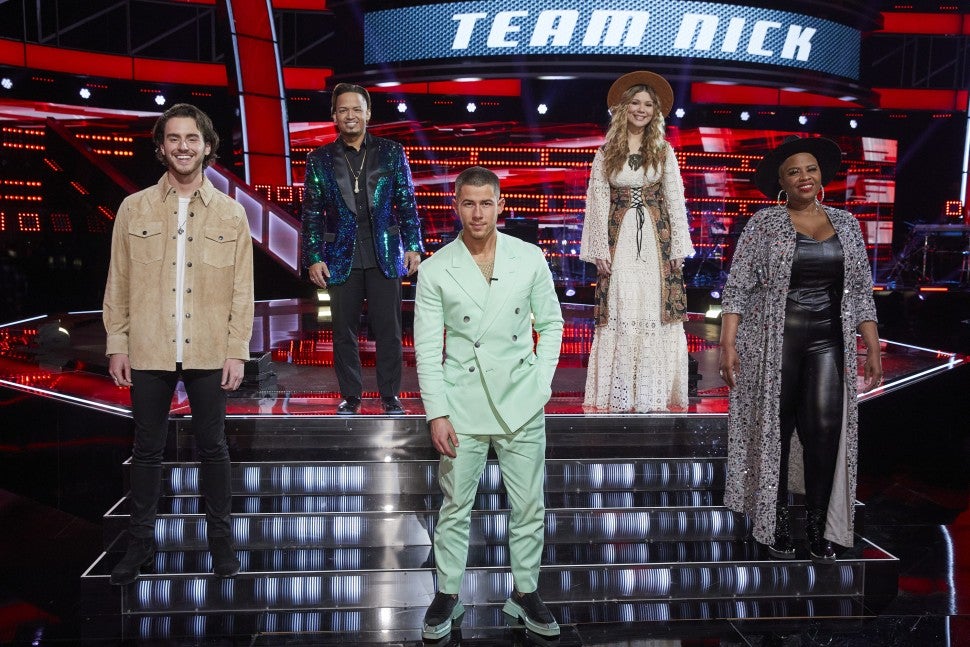 Over on Team Nick, Rachel Mac and Dana Monique couldn’t have been more ready to take on the live shows — and said they were more excited than nervous for their performances.

“The only difference between singing in my bedroom [and this] is having four superstars sitting in front of me,” Rachel noted of the coaches’ presence.

For Devan Blake Jones, there was a “huge comfort” in being on The Voice‘s live performance stage, with the band and backup singers off to the side and the coaches energy in front of him.

“They remind me of us, they’re human beings that love to perform and sing,” he said of the coaches. “It felt like a party on stage…with the whole COVID thing, everything is so distanced and it felt really nice to engage in this with so many people.”

While Nick’s team noted that they have been encouraging each other throughout the process to not get sucked into social media or worrying too much about their performances, Jose Figueroa Jr. was an extra beacon of positivity, channeling his charisma and faith into an infectious optimism.

And Andrew Marshall agreed, sharing a message of support with his teammates. “Honestly, I’m pulling for everyone here,” he said. “No matter what happens, I’m just gonna be excited to see how everyone continues to grow… I just think that’s a really exciting part of this whole experience.”

In addition to their coaches, the season 20 contestants have also had the help of their Mega Mentor: rap legend Snoop Dogg! ET spoke with Snoop while he worked with singers during the Knockout rounds, and the legendary rapper shared how excited he was to help coach the teams and impart his own experiences on the up-and-coming stars. But, while he had thoughts on each of the season 20 coaches, Snoop wasn’t playing favorites!

“It’s hard to say which team that I like working with the best, because there’s so much talent inside of each team,” he marveled. “Each team has some unique singers and some unique artists that could possibly make it past the show. I know only one person’s gonna win, but it seems like there’s about six or seven record deals up in here.”

The Voice airs Mondays and Tuesdays at 8 p.m. PT/ET on NBC. See more from season 20 in the video below!