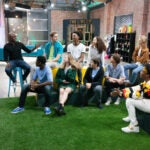 Filming on Season 3, which is slated to premiere in 2022, will take Derrick across the country once more to fit all sorts of animals — a cow, an alpaca, a peacock and, of course, dogs — with prosthetics. And this time, he’s also heading to Thailand to take on a pretty big task: an elephant in need of prosthesis.

“The Wizard of Paws” is a half-hour unscripted series. Season 2 consisted of 10 episodes.

BYUtv, which is owned by Brigham Young University, is available via cable, satellite and all the usual digital-media platforms (Apple TV, YouTube, Roku, Amazon Fire, Chromecast, Xbox One, Windows Media, digital apps for iOS and Android, in this case) and on BYUtv.org.

There are no commercials on BYUtv and no subscription is needed. The platform focuses on family friendly programming and boasts more than 2,000 hours of content. It’s also the home to BYU sports.

BYUtv was the first U.S. television network to stream all of its content live and unencrypted over the internet, the channel says. Today, it has more than 2 million YouTube subscribers and 2 billion views.