Home » TV & Movies » Theyre gonna live forever… in our hearts! Cast members of Fame open up on the series 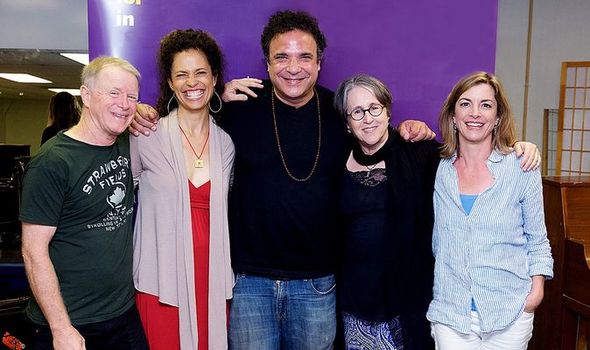 In the words of Irene Cara’s chart-topping theme song, the cast of Fame thought they were going to live forever. They probably thought they could fly, too. The New York City High School For The Performing Arts even inspired our own reallife Brit School, the entertainment academy whose pupils have included Amy Winehouse and Adele. The Kids From Fame – as the cast called themselves on six albums released in just two years between 1982 and 1984 – enjoyed success on a scale quite unimaginable now.

Having burned brightly for six seasons between 1982 and 1987, the show disappeared overnight. But it did open doors for more recent drama series like Glee and High School Musical. Their self-titled first album spent 12 weeks at Number 1 in 1982, preventing classic albums by ABC, Dexys Midnight Runners and Phil Collins from reaching the top. When second album Again came out, the two records were at Number 1 and Number 2 in the chart for a fortnight – a feat only matched in chart history by The Beatles in 1965 and Adele in 2011.

WITH 11 million viewers regularly tuning into see the Fame school pupils’ struggles on BBC1 on Thursday nights after Top Of The Pops, it’s no wonder the cast were mobbed when The Kids From Fame played at London’s Royal Albert Hall.

Lee Curreri, who played keyboard prodigy Bruno Martelli, told the Daily Express: “In America, Fame was only ever a sleeper show. We had no idea how big it was in the UK until that first Royal Albert Hall show. We tried getting on the tour bus, but the bus couldn’t leave as it was mobbed. The minders told us they hadn’t seen hysteria like it since The Beatles and the Rolling Stones.

That made no sense to me. I thought, ‘Hysteria? Us? Are you kidding me?'” Now four decades on, ahead of a reunion later this year, cast members have recalled the triumphs – and tragedies – of the drama series. One of the saddest losses was the death of Gene Anthony Ray, who played flamboyant dancer Leroy Johnson. Gene started his own dance school, but struggled with addictions and died of Aids in 2003, aged 41.

His Fame castmate Valerie Landsburg, who played intense actress Doris Schwartz, told the Express: “Gene was gone too soon. There was no one like him. He was so talented, strong, funny and tender. His death shows how cruel and random the world can be.”

Chris Gore, the screenwriter who wrote the 1980 Alan Parker film that launched the TV series, also died of Aids in 1988 aged just 43. Although aimed at a young audience, Fame was one of the first TV dramas to tackle subjects such as racism, disability, body dysmorphia, eating disorders and illiteracy.

Valerie, who sang lead vocals on The Kids From Fame’s biggest hit Hi Fidelity, remains proud of its legacy. “My character, Doris, befriended a child prostitute. What Fame did was groundbreaking. We did a fundraising TV show with the cast of Glee, who told us, ‘You guys were the trailblazers of all this’.”

Lee Curreri agrees, adding: “It’s great that we tackled these subjects but I’d get frustrated that we didn’t go further. It was obvious that the character of Montgomery was gay, but we never made it explicit. The bosses were afraid of what middle America would say and I’d think, ‘Let’s make some noise, let’s stand some controversy.’ But I’m pleased Glee and High School Musical carried on the legacy.”

The in-fighting wasn’t limited to the scripts, as Valerie admitted she behaved badly towards co-stars Erica Gimpel and Cynthia Gibb, who played drama student Holly Laird. At 23, Valerie was already a successful Broadway actress when she was cast as Doris. While at 17, Erica had just finished school when she began playing talented allrounder Coco Hernandez.

Valerie admitted: “Erica was so talented and beautiful. I could move and sing too, but I felt I didn’t have what she had. Cynthia was just the best girl, and I was so jealous of her.” She continues: “I felt Doris wasn’t being utilised, saying to the producer Bill Blinn, ‘You’re either going to use me or I’m off.’ And I took that frustration out on Cynthia. I called her Olivia Newton-Puke.” The pressure of long days in the TV and recording studios took their toll on Lee in a different way.

He recalls: “I don’t want to sound ‘Oh, you poor child’, but there was no handbook on how to deal with fame. Whenever I asked someone who’d been in Hollywood longer than me for advice, the response was, ‘I can tell you, but I want a piece of your career’. Also, Fame was shot on the same studio lot as Knots Landing and Little House On The Prairie.

“Visiting their sets, you’d see they had a better deal. In the days before cell phones, those casts had their own phones in their trailers. If I asked about these things, I’d be told, ‘If you want one, we’d have to get one for everybody.’ The idea Fame was an ensemble show was a good ruse to keep us, er, ‘grounded’.”

Fame’s poor relation status wasn’t helped by its mediocre viewing figures on US network NBC. Indeed, NBC wanted to cancel Fame after two seasons – only for it to be saved thanks to a unique co-funding deal with the BBC and broadcaster RAI in Italy, where the series was also a smash.

Valerie quit after four seasons, admitting: “To keep portraying someone at high school was strange. Going into my last season, I thought, ‘I’m married and I’m 27, this can’t go on.’ But Fame always felt like family. We fought, we got p****d off with each other. Families do that. On a show that intense, you couldn’t have not spoken to someone for longer than a day and a half.”

Valerie went on to specialise playing what she calls “fast talkers” in shows including Beverly Hills 90210, Columbo and Murder She Wrote before directing. Like his character Bruno, Lee became a successful songwriter and composer, working with the likes of Natalie Cole and Carole King. Lee explains: “Being famous was surreal. Acting in Fame was a sidecar – making music was my real labour of love.”

Their stories of working regularly without major fame was ironically typical of The Kids From Fame. Lori Singer, aka cellist Julie Miller, starred in Footloose. Erica Gimpel starred with George Clooney in medical drama ER. While Carlo Imperato, who played heart-throb Danny Amatullo, is an estate agent, most of the Fame cast are now foot soldiers in the entertainment industry.

The cast’s main fame now is at conventions, where they also get to recreate those Kids From Fame concerts. Lee enthuses: “It’s always a gas to see those guys, they’re all really fun to hang out with.” And any feuds have long since passed. Valerie smiles: “All that stuff is long in the past. I’ve said to Erica, ‘I’m so sorry for the way I treated you.’ We had a huge talk, then held on to each other and just sobbed.

“It’s been the same with Cynthia. The concerts have re-bonded us. And at those concerts, you’ll see the original fans with their kids and even grandkids. “It was sometimes hard – but being in Fame was like winning the lottery. I wouldn’t change it for anything.”

Fame is currently being repeated on NOW 80sTV at 7pm on Thursdays. Lee and Valerie will appear with seven other stars in Fame Reunion at Birmingham Town Hall on September 8-10. See the Fame Reunion website for more details.