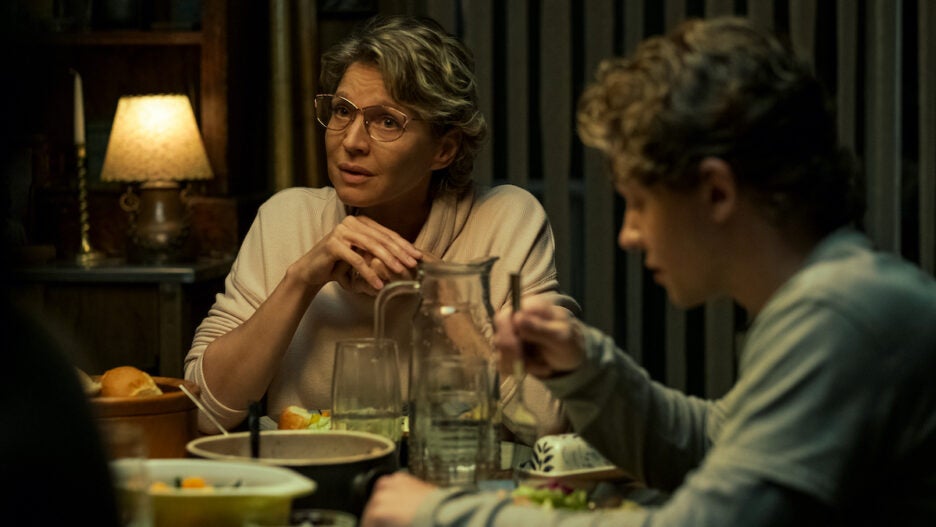 (Warning: This post contains spoilers through the finale of Netflix’s “Midnight Mass.”)

One of the aspects of Mike Flanagan’s “Midnight Mass” that sneaks up on those in-universe and viewers at home is the de-aging of some of its central characters.

It’s a plot point driven by their consumption of the angel-blood-laced communion wine Father Paul (Hamish Linklater) has been giving to his flock to bring about the “miracles” the priest (who is secretly their old Monsignor Pruitt, restored to youth himself by The Angel) has bestowed upon Crockett Island since his arrival.

While the decision to slowly be de-aged, healed and vampire-ified wasn’t up to “Midnight Mass” characters being dosed, the choice of how to portray their de-aging was one very much in the control of the seven-episode Netflix limited series’ producers, who spent a lot of time discussing the best route to take to keep the transformations as subtle as possible.

“We talked at one point about doing older actors and the de-aging them digitally,” “Midnight Mass” creator Mike Flanagan told TheWrap. “And we thought the technology — we had the same conversation with ‘Doctor Sleep’ — we both still feel like that technology is distracting.”

“Yeah, it’s hard,” executive producer Trevor Macy added. “And it was a scheduling challenge. It was a Fractured FX who did the special effects makeup, and it was a big challenge for them. They did a great job. But it was a more grounded way of doing it. And a lot of people don’t recognize Henry [Thomas, who plays Ed Flynn, the father of Zach Gilford’s Riley Flynn] and Kristin [Lehman, who plays his mother, Annie Flynn], for example. So by the time they know, it’s like, ‘Oh, wait!’”

“Midnight Mass” showrunner Flanagan says what made him and Macy “confident” in their decision to use makeup effects rather than digital de-aging technology was watching shows like HBO’s “True Detective” and “seeing how convincing and how willing we were as viewers to go along with seeing an actor we recognize and know is not that old, but seeing them and buying into it.”

“We both felt, as viewers, we took that ride with the show like that and went, ‘Yep, we buy it.’ But we didn’t necessarily take that ride when we’ve seen the digital de-aging,” Flanagan said. “In fact, it’s knocked us out a little. And then we start scrutinizing the technology… And so you start studying it. And so I think we both just felt like our experiences as fans and viewers of other things, we were way more with the show with aging younger actors up than we were with the alternative.”

Flanagan continued: “We wanted the transition to be very gradual. We didn’t want it to have a speed bump where it went from one actor to another abruptly. We wanted it to be like, ‘You know, if I really go back and look at a frame of them in the pilot, and I look at them in Episode 6, they really changed a lot, but I didn’t notice it happened incrementally.’”

As viewers who have finished “Midnight Mass” know, Dr. Sarah Gunning’s (Annabeth Gish) elderly mother, Mildred Gunning (played by Alex Essoe) — whom Father Paul/Monsignor Pruitt gives communion every day in order to bring the woman, who is secretly his longtime lover, back to youth with him — is “the most extreme example of that” in the show.

“She has five phases, everybody else has three, for obvious reasons,” Macy said.

“But we also didn’t want the characters to catch on, because if suddenly Mom is played by a different actor, it makes it harder to go with,” Flanagan said. “But if we kept it incremental and more subtle, then, hopefully, we could get where we wanted to go without raising the question of why characters aren’t reacting to this.”

Readers can find more from our “Midnight Mass” interview with Flanagan and Macy here.