Home » TV & Movies » Will The Buckingham Palace Balcony Renovation Be Ready in Time For Trooping The Colour?

Buckingham Palace is currently under some major renovations — renovations worth $482 million in upgrades. And, right now, the area under construction includes the famous balcony that the royal family stands on during Queen Elizabeth’s official birthday celebration, Trooping the Colour. Will the royal family’s balcony be ready in time for the festivities? Find out, ahead.

This weekend, the royal family’s most important members will gather at Buckingham Palace for an official ceremony marking the queen’s 93rd birthday called Trooping the Colour. The festivities will take place on Saturday, June 8, 2019 and will consist of a parade featuring 1,400 soldiers, 200 horses, and 400 musicians. And, according to Express, it’s “one of the most esteemed military displays in the world.”

In addition to the military display, members of the royal family will also participate in the parade via carriages before making their way to the Buckingham Palace balcony to enjoy a flypast by the Royal Air Force. But, will the balcony be ready in time?

According to the Household Division of the British Army the famous balcony — which has been under renovation — will be ready. After all, it wouldn’t be Trooping the Colour be without it! So, we can expect to see the queen and her family members (including some of its newest members) on the balcony this weekend.

Who attends Trooping the Colour?

Trooping the Colour is one of those rare royal moments when almost all of the queen’s family members — or at least the most important ones — get together for an official engagement. In year’s past, Her Majesty was joined by Prince Philip, Prince Charles, Camilla Parker Bowles, Prince William, Kate Middleton, Prince Harry, Meghan Markle, and other prominent members of the royal family. But, with royal babies and Meghan Markle on maternity leave who will join her this year?

Unfortunately, Baby Archie won’t make his first Trooping the Colour this year. However, his mother, Meghan Markle is expected to attend along with Prince Harry despite their maternity and paternity leaves. 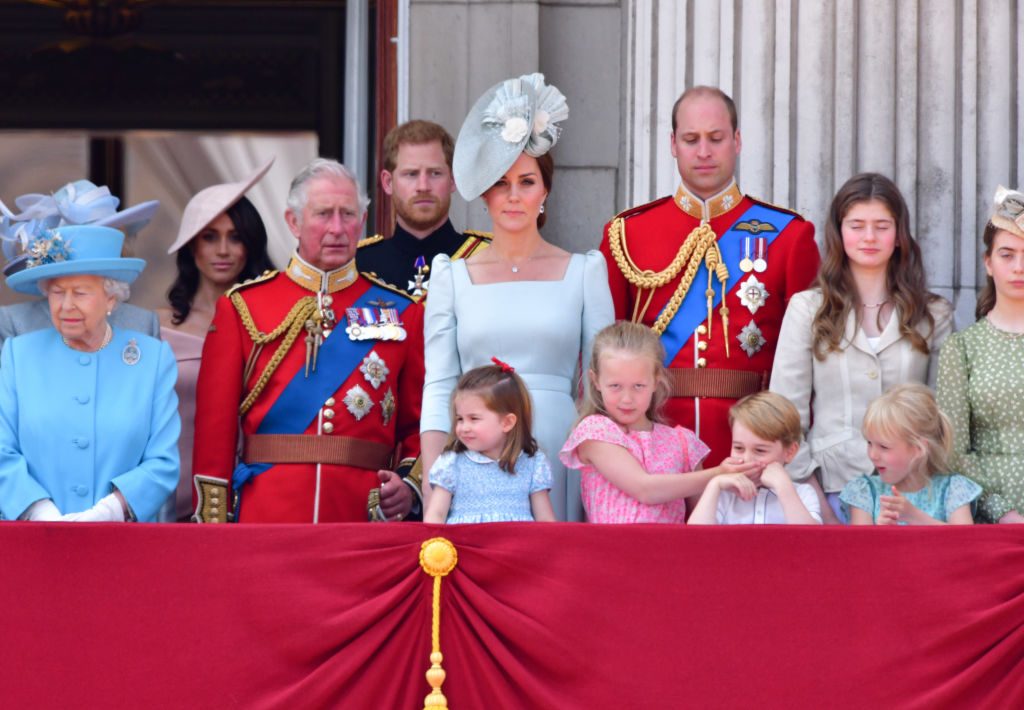 In addition, Prince Louis is expected to make his first Trooping the Colour appearance which is always a good time. Despite the impressive spectacle, the royal kids (especially the babies) are the real reason so many love Trooping the Colour — they are the most entertaining, after all. Prince Louis will, of course, be joined by his parents, Prince William and Kate Middleton, as well as his siblings, Prince George and Princess Charlotte.

Just like last year, Prince Philip will likely sit this one out. The retired royal rarely makes public appearances anymore and will likely celebrate in private with the rest of the royal family instead.

Other members in attendance will include Prince Charles and Camilla Parker Bowles, Prince Andrew, Princess Eugenie and possibly Jack Brooksbank (if Brooksbank attends, it will be his first Trooping the Colour since marrying into the royal family last fall), Princess Beatrice, Princess Anne and her family, and Prince Edward and his family.