London: A third of Britons believe the UK's premier security ally the United States is one of the top five countries that pose the greatest threat to global peace and security.

In research findings labelled as "striking", the US was ranked behind authoritarian regimes Russia, China, North Korea and Iran as comprising the five top countries threatening global safety. Thirty per cent 30 per cent of Britons identified the US, the enduring partner in the so-called "special relationship", as a top-tier threat. 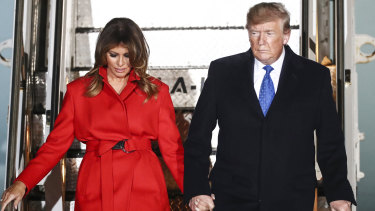 The poll was conducted by Opinium for the British Foreign Policy Group ahead of the NATO summit in London this week.

The findings came as President Donald Trump touched down in London on Monday night (Tuesday AEDT) ahead of the summit, setting up an awkward dynamic for British Prime Minister Boris Johnson. Johnson who is keen to distance himself from Trump, ahead of next week's general election given the American is an unpopular figure in the UK.

Trump is hosting one-on-one meetings with NATO leaders while in London but Johnson is not expected to be one of them.

The summit, to mark the alliance's 70th anniversary, will focus on modern threats of space and cyber. 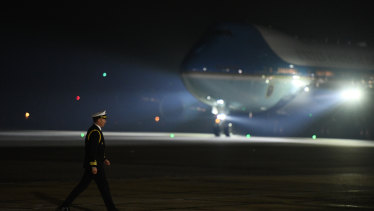 Air Force One lands on the tarmac in the UK, bringing the leader of a country one in three Britons have named as a threat.Credit:Getty Images

Sophia Gaston from the policy group told The Sydney Morning Herald and The Age the results showed the "brazen Salisbury attack", in which Russian agents poisoned a KGB defector and his daughter, was "still very present in Britons’ minds".

"Russia stands apart as the single greatest threat to global peace and security, joining hostile states such as North Korea and Iran," she said.

But she said perceptions of China were also significant. The Conservative government has been unable to make a decision on whether to follow Australia, the United States and New Zealand in banning Chinese telecommunication manufacturer Huawei from its 5G network, as it tries to balance its desire for greater economic ties outside Europe after Brexit with pressure from its Five Eyes allies to consider Huawei's potential security threat as paramount.

"It is also clear that Britons no longer simply see China as an economic competitor but also an autocratic state with the capacity to undermine the world order," she said.

"The growing antipathy towards the United States reflects the increasingly binary identities that have emerged in the wake of the 2016 EU referendum, with political leaders presenting a zero-sum choice of a future aligned with America or the European Union," she said.

"The ‘special relationship’ has withstood turbulent times before, and there is every chance it will find a pathway through these rocky years."

"However, with both countries heading to the polls, the uncertainty of outcomes – and the stakes they carry – mean there is also potential for new strains to emerge."

The polling underlines the difficulty Johnson has in trying to balance his friendship and association with Trump who has had to keep his presence in London to a bare minimum on previous visits to avoid huge protests.

Presidential interventions, while not unprecedented, are taken badly in the UK. When Barack Obama warned that Britain would be at the back of the queue in the line of countries wanting a trade deal with the US if it voted to Leave the EU, Brexiteers decried the Democratic president's contribution.

Likewise, Labour leader Jeremy Corbyn has seized on Trump's friendship with Johnson to claim that a post-Brexit trade deal would amount to a selling off of the National Health Service.

Trump will stay at the US Ambassador's residence, Winfield House, which sits on 12½ acres on the north-west side of Regent's Park.

On Tuesday night, London time, he will visit Buckingham Palace along with the 29 other NATO leaders for a reception the Queen is hosting for leaders. It will be Trump's second encounter with the Queen, of whom he is a fervent admirer.

The leader's meeting will take place on Wednesday at the Grove Hotel at Watford in Hertfordshire, just outside London.

It is the first time since 2014 that the UK has hosted the summit and Britain says it has been responsible for putting cyber and space on the NATO agenda in recent years. Last month NATO declared space one of its operational domains alongside air, land, sea and cyber.

The UK were the first NATO member to offer offensive cyber capabilities to NATO through the National Cyber Security Centre. And in July the UK became the first country to join the US’ Operation Olympic Defender which responds to hostile activity in space.