A third of former hospitality workers would not consider returning to the industry even though they are looking for a job, a new survey found Friday – in another worrying sign for a sector that is suffering from an acute labour shortage despite a high unemployment rate.

Separately, half of former hospitality staff said they would not want to return to their previous position, according to Joblist’s second-quarter survey of around 13,000 job seekers. Just under half – 45% – wanted higher pay, and 29% better benefits.

Although bars and restaurants in cities like New York are now operating almost as normal, bosses are facing a fight to tempt workers back, with President Biden’s continuing $300-a-week unemployment benefits combined with state payments sometimes making it more lucrative to stay at home than take a low-paid role.

Bank of America estimates that anyone who earned $32,000 before the pandemic can now get more from a combination of state and federal unemployment benefits. They are also allowed to claim benefits for up to 39 weeks – nearly a full year – whereas before, it was capped at 26 weeks. The average US salary in 2019 was $31,133.

It has created a scenario where restaurant workers, cleaners, retail workers and other people who slogged for minimum wage are simply choosing to stay at home because they earn more and are not put at risk of catching the virus. Now, the only way for businesses to make up for it is by raising their prices – and Republicans are up in arms about the fast-paced inflation it is causing. 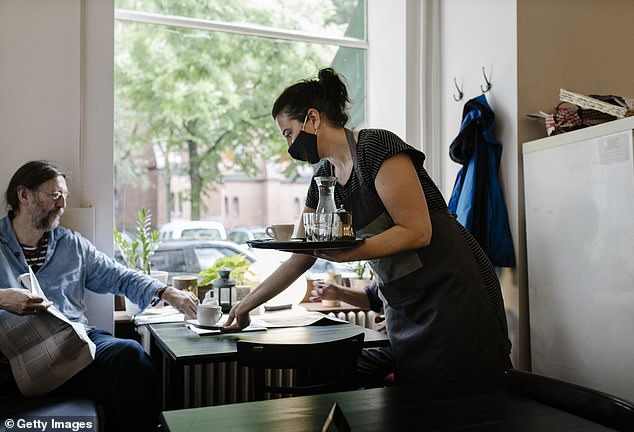 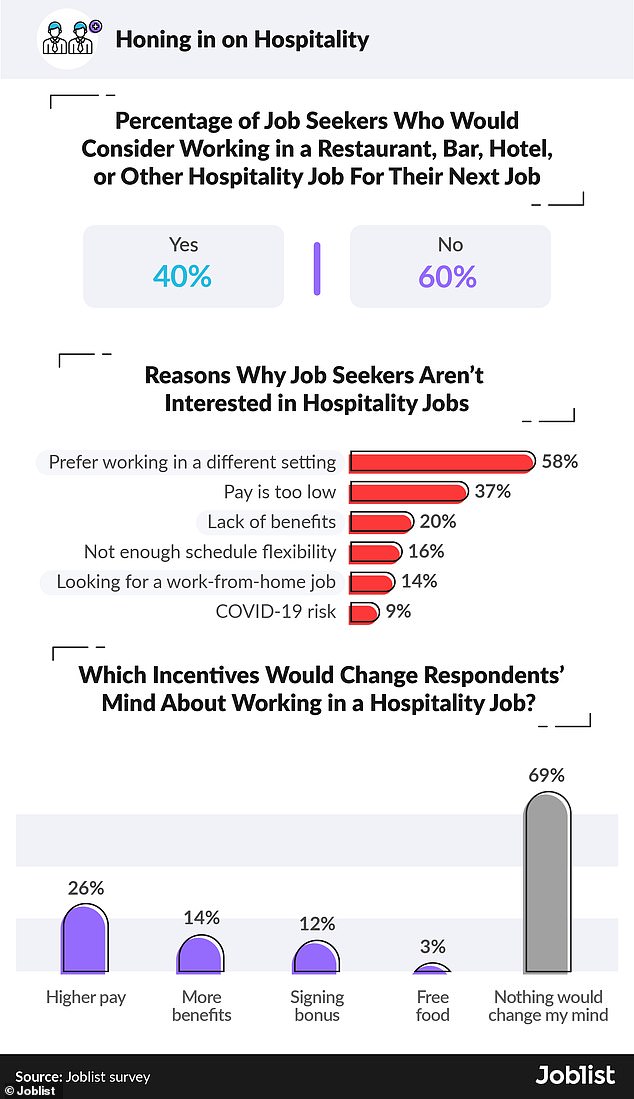 The number of available jobs across the US rose to a record high of 9.2 million in May, which essentially means there is now a position available for every unemployed person across the country. The $300 additional rate is set to expire in September.

Millions of hospitality workers lost their jobs during the pandemic, forcing many to move into other sectors.

Hospitality jobs tend to pay far lower wages than other industries, with average pay for hourly workers in non-managerial roles at $16.21 in June, compared to $25.68 across the wider public sector, according to the US Bureau of Labor Statistics (BLS).

However, a huge labour shortage has seen bosses push up wages, with McDonald’s boosting pay by 10% at its directly-owned branches.

One McDonald’s in Arlington, Virginia, is offering a $500 sign-on bonus for new employees, reports Axios, while Wendy’s is offering $100 signing and referral bonuses to new hires, in addition to same-day pay.

Chipotle is increasing the pay of restaurant workers to an average of $15 an hour.

In Ohio, White Castle has started to boost hourly pay from $11.50 to $15, according to The Columbus Dispatch.

One factor blamed for the ongoing labor crisis are the ongoing COVID-related unemployment benefits being offered by many US states – some of which pay considerably more than an entry-level job would.

Nearly 15 million people claimed some form of unemployment insurance benefits in late May, up from about 2 million before the pandemic.

Massachusetts and Washington are the most generous states, offering those on unemployment benefits up to $850-a-week, although those handouts will end in September as the economic recovery gathers pace. 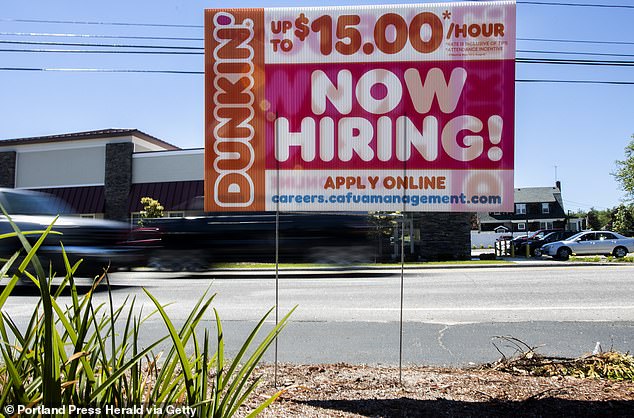 Businesses have been jacking up their wages to attract staff, with this Dunkin Donuts advertising roles at $15 an hour 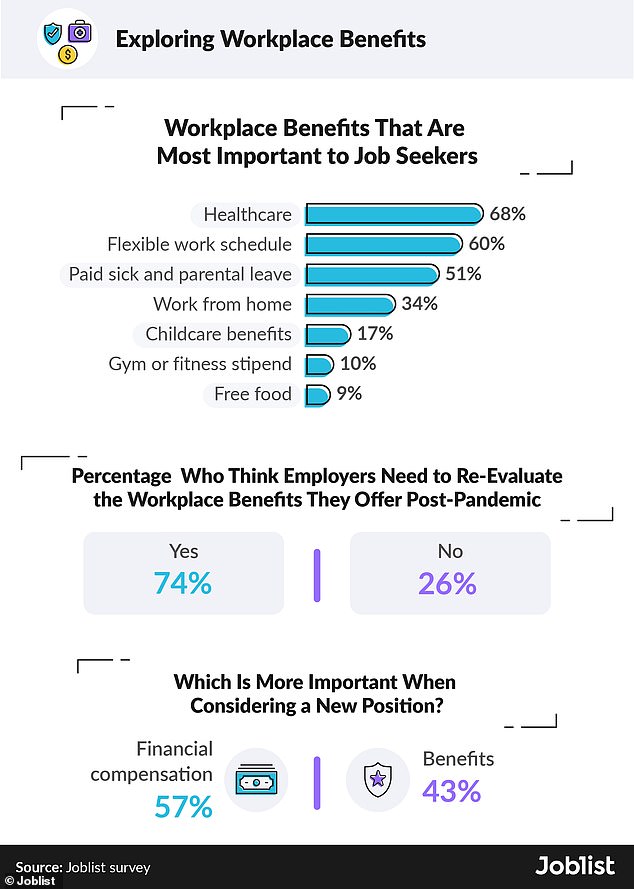 The lack of these benefits is a major factor in attracting employees right now, with 55% of job seekers saying that they would even consider taking a lower-paying job if it offered better benefits, according to the survey (pictured)

In March 2019, the average weekly payment to an unemployed person was $348 when combining federal and state unemployment payments.

‘I had to take off my $800 sneakers and cut my own grass’: Mass labor shortage in the exclusive Hamptons leaves the rich to cut their own lawns

By Sandra Salathe for Dailymail.com

A mass labor shortage has left the privileged residents of the Hamptons fending for themselves.

The combination of soaring local rental prices, the ban on temporary work visas and the fact that many hospitality workers are not keen to rush back to their grueling, low paid jobs after generous Covid-19 boosted unemployment, has left many Hamptonites without paid help for the first time. 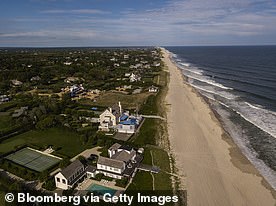 A mass labor shortage has left the wealthy and privileged residents of the Hamptons fending for themselves in ways they could never imagine. Pictured, the Hamptons shoreline

Some wealthy residents have even been forced to do the unthinkable; mow their own lawns or wash their own laundry.

‘I had to buy a lawn mower and cut my own lawn. I wanted flowers planted behind the pool,’ one resident posted on the neighborhood app Nextdoor. ‘The landscaper didn’t show up. I had to do it myself,’

The same person added that their brother had to teach them how to use ‘the thing that trims the weeds.’

‘Yesterday, I finally did that. I had to take my $800 sneakers off first, but it was actually satisfying,’ the resident added.

That nearly tripled to $938 in April 2020, when Trump passed CARES – a temporary economic plan that boosted weekly unemployment payments by $600 and also gave employed people one-off stimulus checks. It expired in last summer.

Now, the average weekly unemployment check is $638 – still $300 more than before the pandemic, and it’ll stay that way until September 6 at least.

It means, someone who was working 40 hours a week before the pandemic now gets nearly $16-an-hour to do nothing at home, which is more than double the federal minimum wage of $7.25.

Federal unemployment benefits are supposed to end by Labor Day across the country, but in some states, such as Maryland and Tennessee, they are ending early.

The 9.2 million jobs posted by employees on the last day of May was up slightly from the 9.19 million in April, a report from the Labor Department said. It is the most since record-keeping began in 2000.

The number of people quitting their jobs slipped in May from a record high in April but remains elevated, according to the report. The percentage of workers getting laid off hit a record low in May.

The fact there was one open job for every unemployed American in May is a situation that is far more typical of an economy with a much lower unemployment rate.

The unemployment rate in the US was still elevated at 5.9 percent in June.

In the first three months of the year, the government has estimated that the economy expanded at a brisk 6.4 percent annual rate. In the April-June quarter, the annual rate is thought to have reached a sizzling 10 percent. And for all of 2021, the Congressional Budget Office has projected that growth will amount to 6.7 percent. That would be the fastest calendar-year expansion since 1984.

The economy is recovering so quickly that many companies can’t find workers fast enough to meet their increased customer demand.

In June, employers added a strong 850,000 jobs, and hourly pay rose a solid 3.6 percent compared with a year ago – faster than the pre-pandemic annual pace and a sign that companies are being compelled to pay more to attract and keep workers.

Still, the nation remains 6.8 million jobs short of the level it had in February 2020, just before COVID-19 tore through the economy and eliminated tens of millions of jobs. 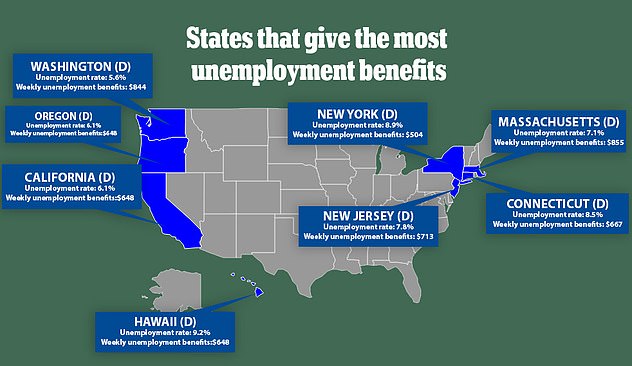 In eight states, the unemployed can earn at least $600 per week in benefits. Massachusetts offers the most generous benefits 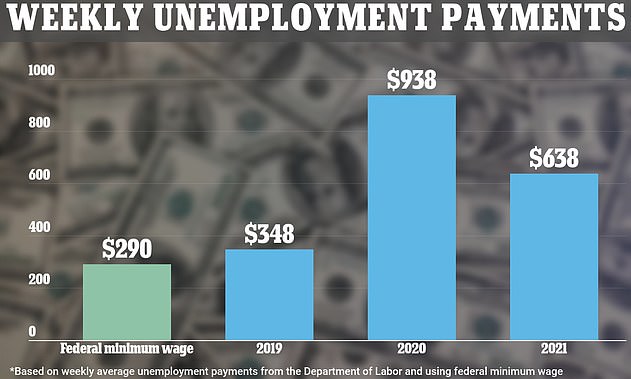 In March 2019, the average weekly payment to an unemployed person was $348 when combining federal and state unemployment payments. That nearly tripled to $938 in April 2020. Now they’re still $638 -a-week – $300 more than they were before. It means, someone who was working 40 hours a week before the pandemic now gets nearly $16-an-hour to do nothing at home, which is more than double the federal minimum wage of $7.25

Weekly applications for unemployment benefits, though down sharply from earlier peaks, are still comparatively high: Before the pandemic, they were typically coming in at only around 220,000 a week.

The total number of Americans receiving jobless aid, including supplemental federal checks that were intended to provide relief during the pandemic recession, amounted to 14.2 million people during the week of June 19, down from 33.2 million a year earlier.

Many states, though, have dropped the federal aid, responding to complaints that the generous benefits were discouraging some of the unemployed from seeking work: A total of 26 states plan to end the $300-a-week federal benefit before it ends nationally on September 6.

Most of those states will also cut off federal assistance to the self-employed, gig workers and people who have been out of work for more than six months.

Still, many factors other than the enhanced federal jobless benefits are thought to have contributed to the shortage of people seeking work again: Difficulty arranging or affording child care, lingering fears of COVID-19, early retirements by older workers, a slowdown in immigration and a decision by some people to seek new careers rather than return to their old jobs.

‘We see weekly filings declining over coming weeks as job growth picks up, although at least some of the improvement will be due to states suspending federal support measures,” Rubeela Farooqi, chief US economist at High Frequency Economics, said in a research note. 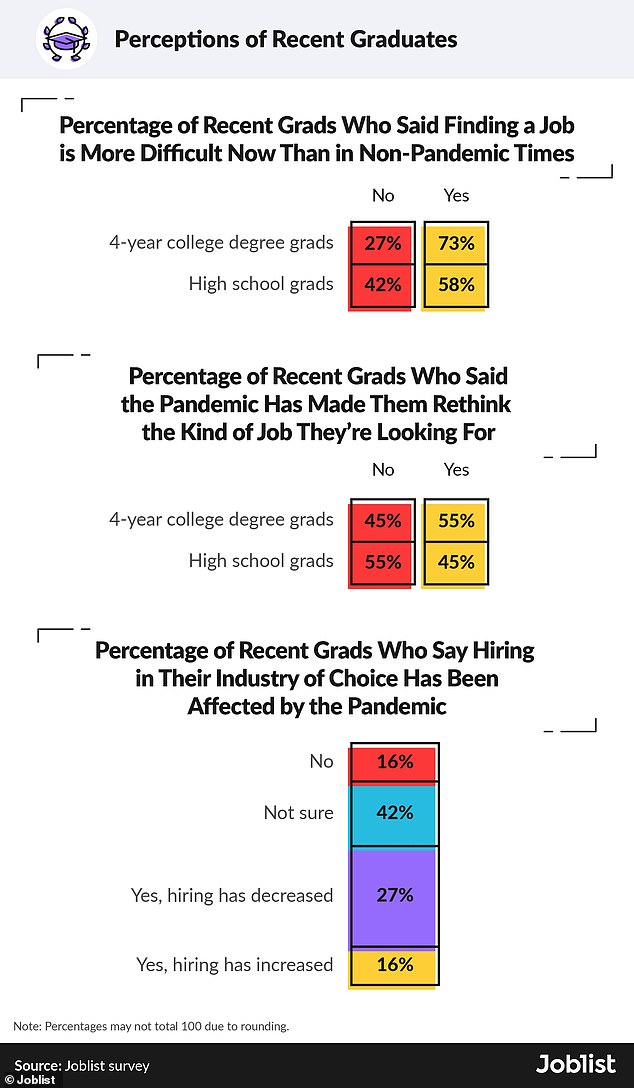