Victorian authorities have confirmed another case of someone evading hotel quarantine in Sydney and flying into Melbourne, after a man arrived from San Francisco in July.

The breach was identified by airline staff on July 14 and the man was forced into quarantine at a Melbourne hotel, where he later tested negative to COVID-19.

Victoria's Department of Health and Human Services confirmed that it did not alert passengers on the domestic flight of the quarantine breach, saying it was not the policy to alert contacts at that time. 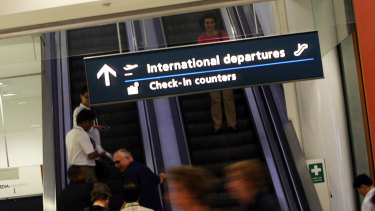 An aviation worker managed to skip mandatory hotel quarantine in Sydney and fly to Melbourne in July.Credit:Louie Douvis

The incident, which occurred while Victoria was dealing with a surge in coronavirus cases, was revealed to The Age following a bungle at the weekend in which two German nationals were able to skip mandatory hotel quarantine in Sydney before boarding a domestic flight to Melbourne.

The Victorian president of the Australian Medical Association has called for "brutal transparency" from the Victorian government over any other slip-ups in system, and says the lack of disclosure of the breach speaks to a problematic culture within the Department of Health and Human Services.

According to aviation sources, the man worked for the now-closed regional American airline ExpressJet, but was travelling as a passenger on United Airlines flight UA863 from San Francisco that landed in Sydney.

The Victorian Department of Health confirmed that domestic airline staff raised the alarm, and he was met by DHHS authorised officers in Melbourne, who detained him and placed him in mandatory 14-day quarantine.

But unlike this week's incident involving two German nationals, those also on board the Sydney-to-Melbourne domestic flight were not notified of the potential exposure to coronavirus, and the breach was not made public.

A DHHS spokesman said the "practice of quarantining secondary contacts as a precautionary measure" only began in October, three months after the incident.

"We now contact trace both primary close and secondary close contacts," he said.

According to sources with knowledge of the circumstances, who were not authorised to speak publicly, the man was placed in quarantine at The Park Royal airport hotel.

The Park Royal hotel has operated throughout the period in which Victoria’s hotel quarantine program was suspended for some returned travellers and maritime workers, according to the government.

While the department confirmed the man tested negative to COVID-19 on day three and day 11 of his two-week quarantine, AMA Victoria president Julian Rait said the fact there had already been a known instance of a breach in the system before Saturday's incident spoke to his organisation's ongoing concerns that DHHS had "a lack of an adequate safety culture".

“The best healthcare institutions have an open disclosure policy where not only are patients are told of any unexpected mistake, but staff are encouraged to reveal them and examine how they might be prevented in the future.

“That applies equally as much to NSW as Victoria, it's easy to be critical but I think we all need to reflect on what’s the most appropriate organisational culture that will lead to better outcomes.”

How the man managed to board the flight to Melbourne remains unclear.

NSW Police said they had no discrepancies recorded for passengers arriving at Sydney who were required to complete their mandatory quarantine in a police-managed hotels. A spokeswoman said any air cabin crew, who are processed seperately to regular passengers, would not have had contact with police.

Spokeswomen for the NSW Health Minister Brad Hazzard and Police Minister David Elliott referred all questions to NSW Police, while an Australian Border Force spokeswoman said her agency only had responsibility for passengers up until the point they arrived on Australian soil.

“From that point the responsibility for passengers passes to state and territory authorities for hotel quarantine and onwards domestic travel if relevant,” she said.

NSW Police admitted fault for a slip-up which allowed the Germans to fly to Melbourne without quarantining, with the mistake pinned on an officer on his second day of work and misinterpreted paperwork.

The mother and son were only picked up after a security guard noticed them looking lost in Melbourne. The pair have since tested negative twice and more than 170 close contacts have been released from isolation.

All international flights into Victoria were cancelled on July 10, as active cases grew to 1172. International arrivals and hotel quarantine resumed on Monday.

Six symptomatic passengers and 10 with complex health problems have so far been taken to one of Melbourne's "hot" quarantine hotels.

A Victorian government spokeswoman said the examples of NSW breaches could not happen in Melbourne due to all international arrivals being processed ‘air-side’. She called on other states to tighten their protocols.

“Our strict processes ensure that international travellers cannot board another domestic flight in Victoria, as we saw happen in NSW this weekend,” she said.

“No one arriving from an international flight into Melbourne will be allowed into the general areas of the airport. They will be kept separate at all times.

“We are calling on other states to adopt similar processes to avoid these situations occurring.”

Victorian Health Minister Martin Foley said on Tuesday that protocols at Sydney airport would be raised on Friday at the national cabinet.

Catch all the day’s headlines