Moscow: On a desolate archipelago in the Russian Arctic – so far from civilisation that it was a Soviet nuclear bomb test site in the 1960s – sits a leaky metal hut shaped like a barrel with an icon and a photograph of President Vladimir Putin on the wall inside.

There are no trees, no internet, no landline or mobile phone connection and no water on site except for melted snow and ice. Hungry polar bears are all around. So the outpost at Cherakino seems a perfect place to revive the practice of political exile in Putin's Russia, opposition leaders contend. 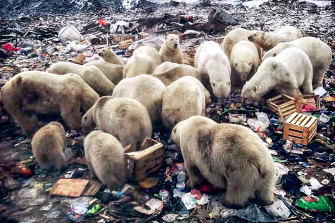 Polar bears are a serious risk on the Russian archipelago of Novaya Zemlya, where Putin’s political opponent, Ruslan Shaveddinov was sent.

It's here that Russia's military sent one of the country's most promising opposition politicians, Ruslan Shaveddinov, after security agents in black masks broke down his door and seized him from his home in December 2019.

"They called it political exile. They didn't even try to train me in military skills," Shaveddinov said in an interview with The Washington Post after his return to Moscow on December 23, exactly a year after he was taken. 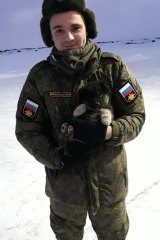 The ordeal faced by Shaveddinov – a close ally of opposition leader Alexei Navalny – offers another look at Russia's increasingly aggressive tactics to silence and intimidate Putin's critics. In recent months, authorities have ramped up harassment and prosecutions of activists, dissidents and journalists, freezing bank accounts and conducting repeated searches of homes.

The pretext to send Shaveddinov to the desolate Novaya Zemlya region was mandatory military conscription for men, a means increasingly being used to send young male political activists to remote hardship posts. But he asserts that military officials told him his treatment was political and insists he never got a draft notice.

A year of military service is mandatory for Russian men age 18 to 27, but the sons of wealthy or well-connected Russians can usually escape it with a bribe to the notoriously corrupt local military recruitment offices.

Shaveddinov is a particularly important foe of the Kremlin because of his work as a project manager on Navalny's "Smart Voting" tool, which directs voters in elections to the candidates considered most likely to defeat rivals from Putin's United Russia party. The next big test for the opposition is parliamentary elections expected in September.

Navalny said Shaveddinov was the victim of an "abduction" that appeared to have been ordered personally by Putin.

Kremlin spokesman Dmitry Peskov said that if Shaveddinov dodged the draft, then everything was done according to the law. 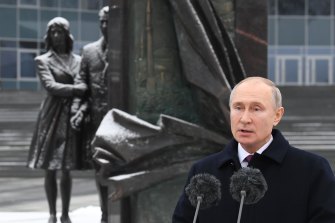 Shaveddinov, 24, grew up in Istra, a poor town west of Moscow, in a region flavoured by Russian politicians and billionaires to build country mansions. The inequality outraged him.

"Even from childhood, I realised that things were not as they should be, that there was injustice," he said. He joined Navalny's cadre six years ago.

His arrest and lightning deportation from Moscow involved multiple security agencies, including the Federal Security Service (FSB), the Investigative Committee (a law enforcement agency for serious crimes) and the military, Shaveddinov said. Such an operation is typical of the high-profile arrests of opposition figures, journalists and activists. 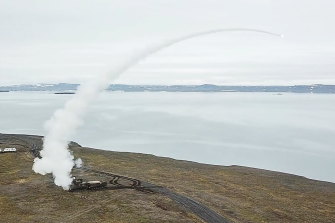 His lawyer, Vyacheslav Gimadi, said authorities breached the normal legal procedures on draft dodgers, who must be sent a first summons and then a second summons. Those who ignore the second summons face a court hearing and are normally fined, he said. However, draft dodging is a felony with a possible penalty of two years in jail for those who continue to avoid conscription.

For Shaveddinov, it began around 3.30pm on December 23, 2019. His mobile phone access, Internet and power were suddenly cut in his Moscow apartment, leaving him in the dark with the setting sun. Special police pounded on his door.

In the months beforehand, he had been detained and searched several times and had his bank account frozen.

"I looked through the hole in my door and saw a crowd of people, all in masks," he said, recounting his story in full. Many of the details had been presented in court in July by his lawyer. 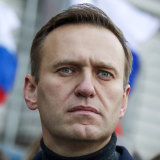 Sparks flew as a cutting device carved through the apartment's two metal doors.

Shaveddinov did not want to be arrested wearing only shorts. He scrambled around in the darkness for clothes, dressing hurriedly and donning odd socks because he could not see. Police burst in, threw him onto the ground, handcuffed him and seized his computer, phone, TV and electric plugs, he said.

They whisked him to the airport, put him – still handcuffed – onto a plane and flew him to Arkhangelsk in Russia's Far North. A rear admiral and other top military officials met the plane before Shaveddinov was transferred to another flight to the Novaya Zemlya archipelago late the same night, he said. He stepped out into a biting wind.

"It was so confusing. Things happened so fast. I didn't have time to be scared. There were people with cameras and I was thinking they probably won't kill me, since they're recording everything," Shaveddinov said.

The next day he was given permission to call his girlfriend, Kira Yarmysh, who is Navalny's press secretary. It was his only phone call.

Three months later, Shaveddinov said he was flown to what he called the "botchka," or barrel, at an even more remote, secret military location. Between three and five other conscripts were there at a time, and a chopper delivered food monthly and mail every two months.

"My job was to clear the landing strip and keep the polar bears away. They were very hungry," he said. "They slept right on my doorstep. In reality, they're very scary creatures."

The barrel is branded onto his memory: One window with ancient yellow curtains frames a flat field. The other, a helipad and a mountain. For more than a month in the winter, the sun never comes up.

To drink or wash he cut a block of snow and melted it on the wood stove. In summer, he walked nearly two kilometres to the river and hauled back two 50-litre cans of water, taking care to avoid the polar bears.

"It is clear why I was sent there: so that I would have no communication whatsoever with my family or friends. It's huge psychological pressure. You're alone with wild bears and dogs and two other people," he said.

"You read books or you just stare out the window and watch your life passing by," he added. "Probably, if I was a different person, I wouldn't have made it. I would have become desperate."

He spent a lot of time talking politics with the other conscripts, all from the northern region. He heard in a letter that Navalny was poisoned and in a coma, but for months did not know that his mentor had survived.

Russian authorities have sent many other opposition members for compulsory military service in remote and harsh locations. The aim, Shaveddinov contended, is to deter political activism among a new generation, many of whom are alienated by Putin's repression and attempts to curb Internet freedom.

"With every year it gets worse and worse and there is less and less freedom," he said. "There are more political repressions and more political prisoners, and fewer possibilities for the opposition to operate.

"The machine eats and destroys everyone," he said, referring to Russia's repressive security apparatus. He believes he was sent to the "botchka" to break him – "but I was not going to give them that gift."

Shaveddinov's lawyer Gimadi sued Russian authorities for illegal abduction, "but the court rejected our complaint without reasoning," Gimadi said. He said the Defence Ministry offered no formal response in court.

"It is clear that it is a political exile because of the unlawfulness of the draft in both its form and content, including the use of searches, and the choice of destination: a very remote unit, where only conscripts from the Arkhangelsk region serve," Gimadi said.

In June, another member of Navalny's Anti-Corruption Foundation, Artyom Ionov, was detained and flown to a military unit in the Far North region of Chukotka despite suffering from asthma, an exclusion for military service. In July, Ivan Konovalov, the press secretary of a small independent medical workers' union, the Alliance of Doctors, was arrested and flown to the Arkhangelsk military unit.

"This practice is increasing all the time. We are hearing more and more attempts," said Alexei Tabalov, activist and founder of a nongovernmental organisation, School of Conscripts.

"Authoritarianism is growing in Russia," Tabalov said. "We can say it is not just authoritarianism. It has become an autocracy, and we realise that Putin is not going to leave, and as long as he's alive he's going to rule the country and the situation will keep getting worse."

When he returned, Shaveddinov carried home a bag full of letters from supporters and well-wishers. A final digital footprint of his journey remains: The "botchka" was marked on Google Maps by supporters, nicknamed "Shaveddinov's Gas Station," attracting a bunch of five-star "reviews" that are actually messages of support.

"There are bears. It's cold. But the company is great," wrote one supporter, Mikhail Samin.

"Hold on there, please," wrote another, "and in the Wonderful Russian Future we will build a monument to all modern political prisoners."