Home » World News » At Crown Shy, the Only False Step Is the Name

Good restaurants don’t rain down from nowhere, but Crown Shy came close. No doubt it went through the same birth pangs as all the others. As far as I can tell, though, it simply materialized one morning this March at 70 Pine Street, and was open for business that afternoon by the time the financial district’s elevators began disgorging traders, bankers and analysts in search of 5-o’clock refreshment.

One reason it seems to have crept up on the city is that it’s a large, well-capitalized, big-time restaurant of the kind that only established groups seem able to get off the ground these days. Yet Crown Shy doesn’t come from Danny Meyer, Andrew Carmellini or any of the other usual suspects. Its two main players were recruited after talks among April Bloomfield, Ken Friedman and the building’s developer fell apart in 2016, before accusations of sexual harassment engulfed Mr. Friedman.

Crown Shy’s chef, James Kent, used to run the kitchen at the NoMad, and his partner, Jeff Katz, is the managing partner at Del Posto. Neither exactly fell off the turnip truck last week. As a team, though, they’re unproven, and as they went through construction and hiring, the drumbeat of publicity was more muted than it might have been if marquee names had led the project.

Then there is Crown Shy’s location, a sprawling, soaring, street-level space that, as far as anyone recalls, has never held a restaurant before. Many New Yorkers have seen the 1932 building’s distinctive, hulking, pyramidal silhouette on the skyline, but until recently, when the offices on its 67 stories were repurposed as expensive apartments and hotel rooms, not many had encountered the frenzied exuberance of the lobby, which makes use of polished marble in at least five contrasting colors. It looks like something Bernini would have designed if he’d lived to see the Jazz Age. Depending on which entrance you use — the revolving doors are crowned with aluminum reliefs of Art Deco flowers being pollinated by elongated stylized butterflies — you may want to allow an extra five or 10 minutes to take it all in before you eat.

Above all, it’s the extent to which Crown Shy already has its act together that makes you ask: Where did this place come from? The whole operation radiates confidence from start to finish. 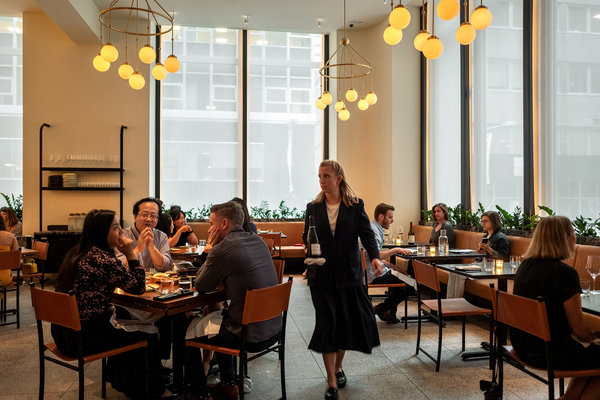 The finish brings real desserts from a real pastry chef, Renata Ameni. She comes to Crown Shy fresh from Manresa, in Los Gatos, Calif., and before that, she put in half a decade at Eleven Madison Park. Her desserts at Crown Shy look uncomplicated, and you don’t realize how intelligently they’ve been put together until you start to eat one.

There’s a milky-white yogurt cheesecake under tender spring strawberries, with smooth strawberry sorbet in the center and a pistachio crumble sprinkled over that. Her chocolate tart gives her a chance to show off about half a dozen different effects she can work with chocolate, starting with a crunchy, crumbly, almost salty chocolate crust, moving on to a soft, soufflé-like filling and ending with curls of dark chocolate.

Ms. Ameni’s side of the kitchen is also responsible for the savory churros filled with Gruyère sauce — the menu calls them fritters, they taste like gougères and the texture is something else entirely. Also her work: the miniature loaf of pull-apart bread that appears after you order. With dried olives on top and olive tapenade between every skinny slice, it is one of the most memorable parts of the meal.

Even the obligatory scoops of ice cream that restaurants seem required to offer aren’t allowed to leave her pastry station until they’ve been turned into a composed dessert, and not some kind of slapdash sundae, either. Satsuma ice cream gets to wear a toasted turban of marshmallowy meringue and some cracked honeycomb candy on the side. The effect is witty and delicious, progressing from purely sweet to bittersweet to tart and bittersweet.

Mr. Kent’s savory dishes pursue the same strategy. This is to say, they regularly over-deliver, starting with the iced Wellfleet oysters dressed with cucumber jelly, diced cucumbers, grains of jalapeño and microleaves of purple shiso. An almost absurdly creamy purée of white bean hummus under a fiery red slick of melted ’nduja is probably meant to be shared, but as soon as I’d tasted it I came up with other ideas, as my dinner guests will testify.

Two tartares show Mr. Kent’s talent for carrying bright new ideas with him into well-traveled territory. In the first, he laces hand-chopped raw beef with toasted walnuts and earthy rye croutons; in the other, chopped raw snapper is sprinkled with individual juice-filled vesicles of grapefruit, lime, lemon and orange that pop between your teeth, a kind of instant, interactive ceviche.

Maybe one or two ideas should have been left by the side of the road. The chicken liver ragù tossed with housemade cavatelli doesn’t need to be so sweet with sherry; a rough pesto is a fine use for fresh chickpeas, but isn’t there a better partner for it than shaved jicama?

All is forgiven when Mr. Kent turns a mainstay like grilled chicken into a main course as exciting as the one at Crown Shy, which keeps the sunshine brightness of its citrus marinade, and is served with a purée-slash-hot sauce of fermented hot and sweet peppers.

The vivid orange of that hot sauce almost matches the marble in the lobby. But Crown Shy’s two big dining rooms and extended bar are a little more restrained, dominated by cream tones, blond wood tables, and chairs with saddle-brown leather seats and backs. The only echoes of grandeur are the enormous windows and the ceiling high up overhead.

The wine list is one to get lost in. Finance wizards with bonuses to expunge can certainly do that, but it’s great to see lots of bottles under $100 on almost every page. Anyone who knows what some of these wines cost wholesale will be able to locate any number of good deals, but even the unschooled will notice the value regions. They jump off the page: Portugal, Greece and New Zealand, for instance, along with vast stretches of Germany and pockets of Spain, France and Italy.

With so many strengths, Crown Shy must have at least one thing wrong with it. And yes, it does. Obviously that name is ridiculous. Knowing that it refers to a tendency of very tall trees not to let their upper stories grow into their neighbors’ branches doesn’t help, either. But we should probably get used to it, because we’re going to be hearing more about this restaurant.

This information was last updated on June 11, 2019