Fifteen of 19 bodies that were found shot and burned in a Mexican border town are reportedly migrants from Guatemala who were expecting to be ferried to the United States.

Family members told Guatemalan newspaper Prensa Libre that their loved ones had left the town of San Marcos on January 11 before crossing into Mexico.

‘Tuesday marks fifteen days since he traveled to the United States with 15 other people from here, from San Marcos,’ a relative said, under the condition of anonymity.

A Mexican law enforcement official with knowledge of the investigation told DailyMail.com on Monday that ‘80% to 100%’ of the victims’ bodies were burned beyond recognition. Talks are already underway with Guatemala to obtain DNA samples. 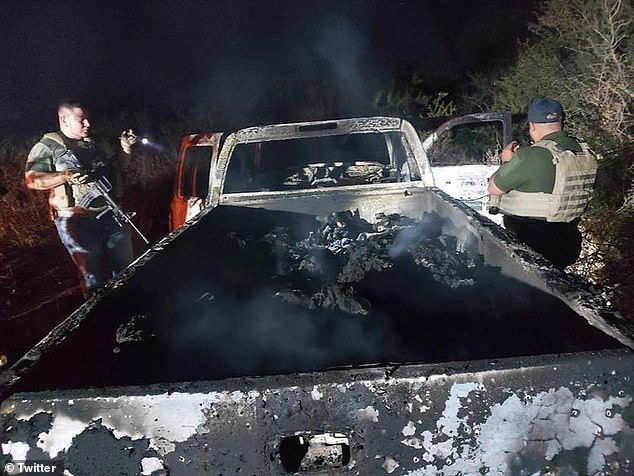 Mexican security forces inspect a vehicle discovered Saturday night in the border town of Camargo with 15 burned bodies, reportedly all Guatemalan nationals who had entered the country January 11 in hopes of crossing the Mexico-United States border, according to family members who spoke to Guatemalan newspaper Prensa Libre under the condition of anonymity 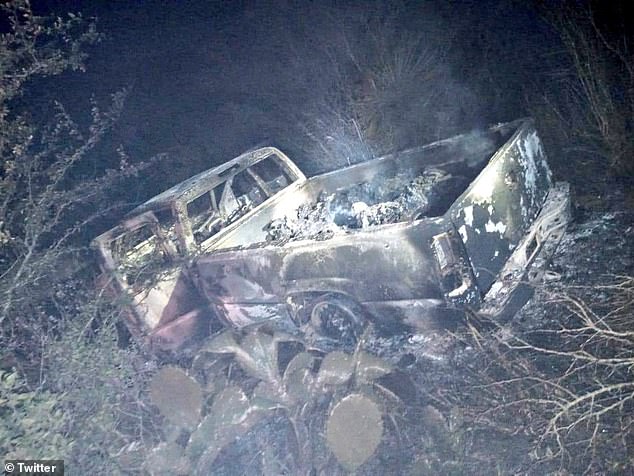 Residents in Camargo, a city in the northeast Mexico state of Tamaulipas, said alleged members of the Cartel del Noreste (Northeast Cartel) entered a home Friday and shot dead 19 people before removing their bodies. The victims were all burned and abandoned in two vehicles in the Camargo town of Santa Anita 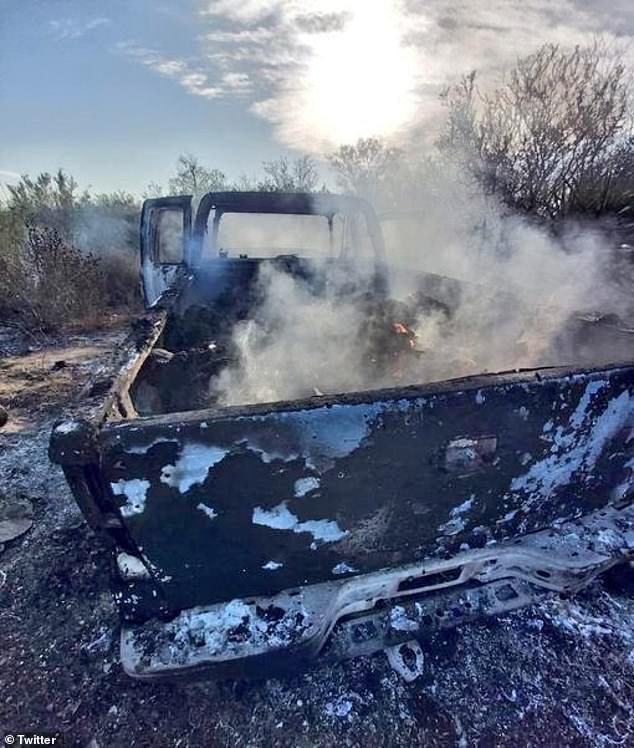 Camargo residents told authorities that alleged members of the Cartel del Noreste [Northeast Cartel] on Friday raided a home where the Guatemalans were staying, as part of the human trafficking scheme to get them across the Mexico-United States, and shot all of them.

The victims were then placed in two vehicles and driven to the Camargo town of Santa Anita, where they were later found burned on a dirt road late Saturday, according to the Tamaulipas state prosecutor’s office.

Authorities located one of the victims on the side of the road and four others in a pickup truck. The 15 Guatemalans were located in the flatbed of another pickup truck.

According to newspaper Proceso, Saltillo bishop Raúl Vera said during a Sunday mass that all of the 19 victims were Guatemala nationals and called on authorities to ramp up their efforts in the investigation.

‘They are a business because [the cartel] helps them move to the United States and their families go into debt,’ Vera said.

‘The people in [Camargo] say that a cartel had people, a crime that is called trafficking, because they took money from them to pass them on, but the enemy group [Northeast Cartel] does not want their rivals to make money off of them … they decided to kill and incinerate them.’

The Mexican government is in talks with Guatemalan officials to secure DNA to identify the bodies. 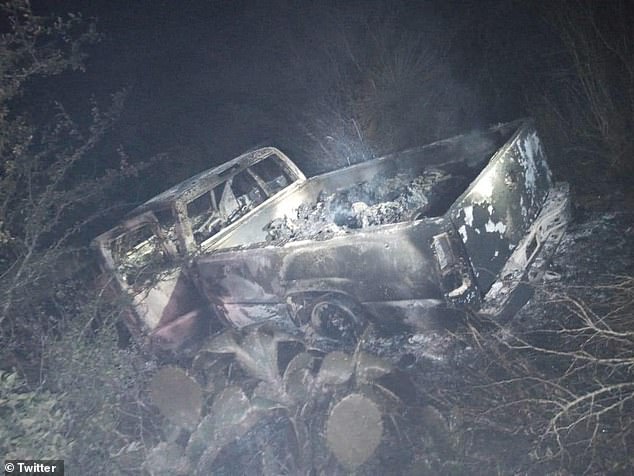 Pictured is one of the two charred vehicles that were discovered by Mexican authorities Saturday. A pickup truck had four bodies inside while another had 15 bodies in the flatbed, all burned beyond recognition 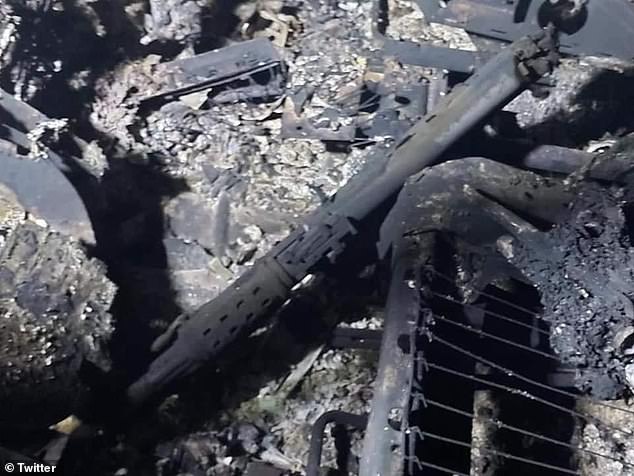 Burned parts of one of the two vehicles that were discovered on fire by Mexican security forces Saturday night in the Tamaulipas town of Santa Anita, some 249 miles away from the border with the United States 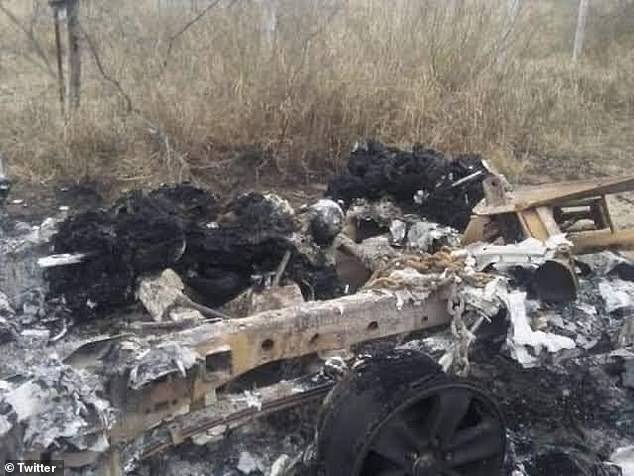 Remnants of one of two vehicles that were torched with the bodies of some of the 19 people who were reportedly executed at a home Friday in Tamaulipas, Mexico, before they were found next day on a dirt on road

The bodies were discovered around 249 miles from the Mexico-Texas border, in an area that has seen violent territorial disputes between organized crime groups in recent years.

A Camargo official, who requested anonymity due to security concerns, said the killings occurred Friday, but people had been afraid to report them.

Camargo is a major smuggling transit point for drugs and migrants.

Organized crime groups covet control of stretches of the border because they make money off everything that crosses the border.

Camargo is near the edge of territory historically controlled by the Gulf cartel and in recent years a remnant of the Zetas criminal organization, known as the Northeast Cartel, has tried to take over.

In January 2020, 21 bodies, most burned, were found in various vehicles near the neighboring town of Ciudad Mier.

In October last year, 59 bodies were found in a mass grave in Mexico’s Guanajuato state, which is known for violence breaking out between two rival cartels.

In September 2019, 119 bags containing the parts of 44 bodies were discovered in the western Mexican state of Jalisco.