We have made our live coverage of the coronavirus pandemic free for all readers. Please consider supporting our journalism with a subscription.

New NSW Premier Dominic Perrottet plans to divert tens of millions of dollars from a CBD stimulus fund to the city’s west, cementing his government’s focus on western Sydney as the key battleground for the 2023 election.

The 39-year-old Mr Perrottet, sworn in on Tuesday as the youngest Premier in the state’s history after winning a secret Liberal party room ballot against Planning Minister Rob Stokes 39-5, vowed to shift the Coalition’s focus from the pandemic to families and cost of living pressures. 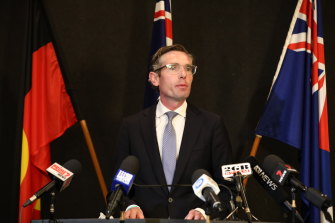 Penrith MP and Jobs Minister Stuart Ayres was appointed Mr Perrottet’s deputy leader, a deal struck to send a message to western Sydney that the Coalition was committed to the city’s fast-growing region.

Mr Perrottet said his first priority as Premier would be to guide NSW through the pandemic recovery, and he would not make wholesale changes to his frontbench until the state is out of lockdown.

Doctors say it is becoming harder to find beds for critically ill Victorians and patients who have undergone life-saving surgery amid rising COVID-related hospitalisations, and predict the pressure will worsen before it eases. 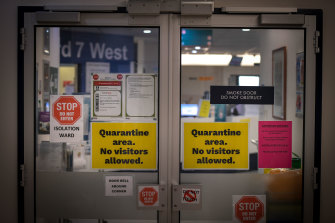 A COVID-19 isolation ward at the Austin Hospital.Credit:Eddie Jim

A key aim of repeated lockdowns was to stop the hospital system being overwhelmed, but Dr Whitelaw said it was increasingly likely Victoria would face that scenario in coming months.

“I think it would be fair to say everybody is saying this is escalating more quickly than we had hoped,” she said.

More on the situation in Victoria here.

Qld borders will ‘not necessarily’ open at 80 per cent: Premier

After weeks of evading questions about whether Queensland’s borders would reopen when the state’s vaccination rate hit 80 per cent, Premier Annastacia Palaszczuk has given her clearest indication yet.

The Queensland Premier has repeatedly cast doubt over whether the state’s borders will reopen once the vaccination target is hit – expected to be early December – while more than 11,000 Queenslanders remain stranded in NSW or Victoria, some living in tents. 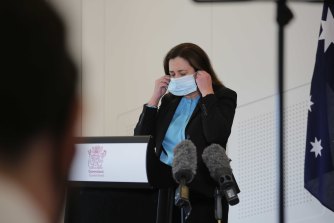 Queensland Premier Annastacia Palaszczuk says the state’s borders will “not necessarily” reopen when 80 per cent of people aged over 16 have been double vaccinated.Credit:Matt Dennien

The national reopening plan, agreed to by state and territory leaders in July, states that at 80 per cent, there should only be highly targeted lockdowns, and vaccinated residents should be exempt from all domestic restrictions.

But when asked directly on Tuesday, “will the borders open at that 80 per cent?” Ms Palaszczuk simply replied: “Not necessarily.”

“It depends on the situation of the day; it depends on what’s happening in NSW and Victoria.”

This morning’s headlines at a glance

Good morning and thanks for your company.

It’s Wednesday, October 6. I’m Broede Carmody and I’ll be anchoring our live coverage for the first half of the day.

Here’s everything you need to know before we get started.