The baffled expression on his face as he listened to Donald Trump launched a thousand memes; now Australian journalist Jonathan Swan has won an emmy for his interview with the then-president of the United States.

In the News and Documentary Emmys announced on Wednesday morning AEST, the Axios news site and channel HBO won Outstanding Edited Interview for Swan’s quick-draw fact checking of Trump’s claims that the American COVID death rate in August last year was not that bad.

Swan, who was a federal political reporter for the Sydney Morning Herald and The Age before moving to the US in 2015, challenged the President to speak factually to the American people about the coronavirus.

At one point, armed with a series of charts, Trump claimed the US was doing “better than the world” in “numerous categories” – only to be left exposed when he refused to account for the per-capita death rate in favour of selected statistics that he couldn’t quite explain.

The moment when Trump then said “you can’t do that” immediately went viral.

“Well, what’s your definition of control?” Trump asked. “Under the circumstances, right now, I think it’s under control.”

“How?” asked Swan. “A thousand Americans are dying a day.”

“They are dying, that’s true. And it is what it is,” he replied. “But that doesn’t mean we aren’t doing everything we can. It’s under control as much as you can control it.”

Trump also doubled down over earlier comments in which he wished British socialite Ghislaine Maxwell well, after she was arrested for alleged child sex trafficking. 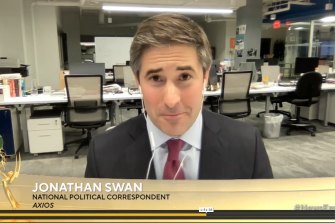 The interview was widely praised by American and Australian journalists. Jeffrey Goldberg, editor of The Atlantic, described it as “one of the best interviews I’ve ever seen”.

Accepting the award via videolink from his newsroom, Swan said: “This is an incredible honour”. He said he was accepting the Emmy on behalf of the team at Axios, DC TV and HBO, before thanking “my wife Betsy, my mentor Pamela Williams and my mum and dad for their love and guidance”.

At the same awards telecast, NBC moderator Savannah Guthrie won the Emmy for best live interview when she hosted Donald Trump’s Town Hall, and at one point reprimanded him for retweeting the baseless claim that Biden and former president Barack Obama may have killed SEAL team 6, the elite unite that assassinated Osama bin Laden, to cover up a hoax where a body double was killed instead.

“I’ll put it out there. People can decide,” Trump said.

“I don’t get that,” Guthrie said. “You’re the president. You’re not like someone’s crazy uncle who can just retweet whatever.”