“The arc of the moral universe is long, but it bends toward justice” is a phrase former US president Barack Obama liked to borrow from civil rights activist Martin Luther King. It reflected Obama’s belief that while change takes time, it will happen, and it will lean towards what is morally right.

Australia has seen its share of struggles for justice. Over decades, the women’s rights movement has had to fight for every liberty: the right to vote, the right to work and the right to equal pay were won by those with the courage to challenge the norms of the day. 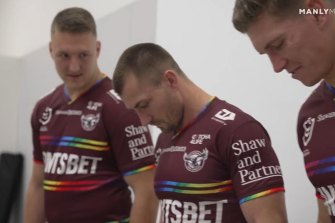 The fallout from Manly’s rainbow jersey is the latest chapter in another such struggle. As with the women’s movement, those advocating for the rights and recognition of the LGBTQ community have for a very long time had to do battle with the norms of the day.

It took more than 20 years for all the states and territories to repeal anti-homosexuality laws, with the Tasmanian government the last. It only relented after a High Court challenge forced its hand in 1997. Legislation allowing men charged or convicted under historical anti-homosexuality laws to clear their criminal record has only come become law during the past decade. It is coming up to five years since same-sex couples were allowed to marry in Australia.

But the journey to full acceptance is far from over, as shown this week by the decision of seven Manly players to boycott Thursday’s NRL match against the Sydney Roosters rather than wear the pride jersey. The players cited their Christianity to explain their reluctance.

The principle of inclusion that the Manly jersey was meant to convey was the right one. The NRL and the AFL should play an active role in embracing the LGBQT community. There is an annual pride match in the AFL between Sydney and St Kilda, which now passes virtually without comment, and the AFLW has a pride round. But still not a single AFL player has been open about their homosexuality.

In Manly’s case, the lack of consultation with the players was a mistake. Coach Des Hasler’s heartfelt apology made that clear, and he was right to take a conciliatory approach to the players who have boycotted the jersey.

Politically, Prime Minister Anthony Albanese has been careful where he treads. It was a “a good thing that sport is more inclusive”, he said, but added that “all people, regardless of their faith, should be respected”.

It’s a rather different approach to that taken by his predecessor. When a dispute between religious expression and the rights of LGBTQ people to live without vilification was raised in the Israel Folau case, the government of Scott Morrison vowed (and tried) to legislate to allow people to use religious belief as a “sword” against the rights of others. It inflamed the issue and ultimately led to a humiliating parliamentary defeat on the eve of the last election.

Albanese, by contrast, has sought to calm the Manly issue, advocating respect for both LGBTQ people and people of faith. He has said his religious discrimination legislation – which he has promised to bring forward in his first term – will be “much more consultative” than Morrison’s, and will attempt to bring people together. Without underestimating the difficulty of that task, it is the right sentiment.

We believe the way forward is along Obama’s arc of justice. LGBTQ people deserve respect, recognition and justice, and should not be made to feel fear or hide their sexuality. As rugby legend Ian Roberts said, “I am a proud gay man. It was never a choice I made. I was born gay, I have lived gay, and I am proud to proclaim I am gay”.

But the reason we need events such as pride games is that, 27 years after Roberts publicly declared his sexuality, he remains the only person in either the NRL or AFL who has felt sufficiently supported to do so. For the sake of all the undeclared LGBTQ footy players, we need to get better at practising acceptance.

Gay Alcorn sends a newsletter to subscribers each week. Sign up to receive her Note from the Editor.