Home » BBC Weather: Northern and Western Europe to be battered by heavy downpours over weekend

Northern and western areas of Europe will be bashed by wet weather through Sunday and into the start of next week. While southern Europe will bathe in temperatures in the high twenties with Gibraltar hitting a sweltering 30 degrees on Sunday. The rain will be pushed across parts of Europe by strong winds but temperaures will remain in the mid teens across central, western and northern europe.

Susan Powell told viewers: “We are pretty much looking at a north. south divide to our weather across Europe in the days ahead.”

She explained how an “area of low pressure pushing in from the Atlantic” and will “push it’s way eastwards as we move through the end of the weekend and into the beginning of the new week.”

But she added: “Get to the south of the low and the picture is very different.”

The weather presenter said there will be lots of sunshine for southern Turkey, Cyprus, the Greek islands and Sicily on Sunday. 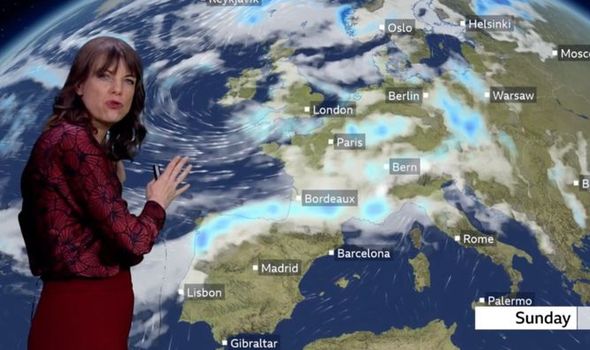 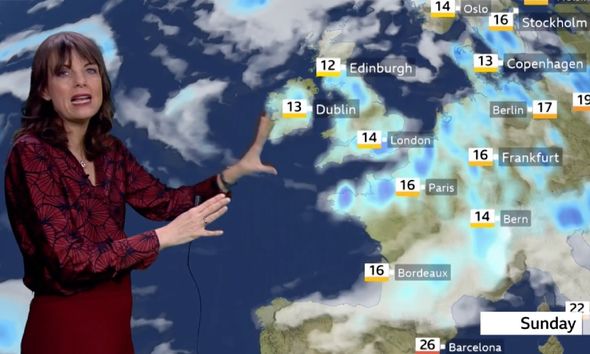 Nicosia in Cyprus will see highs of a sweltering 29 degrees on Sunday while Athens is expected to hit 27.

And Gibraltar tops the temperatures for Europe as it is expected to bake in 30 degree heat on Sunday.

But presenter Powell warned how “northern Spain and France” will be picking up cloud with some “heavier showers pushing into France across the UK.”

She explained this weather front will be driven by a “fairly strong westerly wind”. 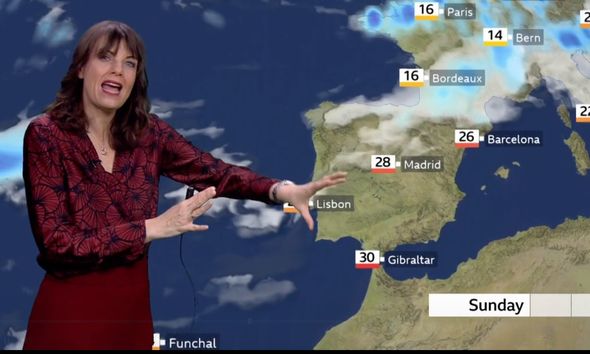 This rain will blanket much of Western Europe over Sunday.

But temperatures should remain mild for Northern and Western Europe with temperatures in the mid-teens on Sunday.

And this wet weather will continue into the start of next week for these areas with the presenter adding “plentiful showers” are due for London, Paris, Berlin and Warsaw. 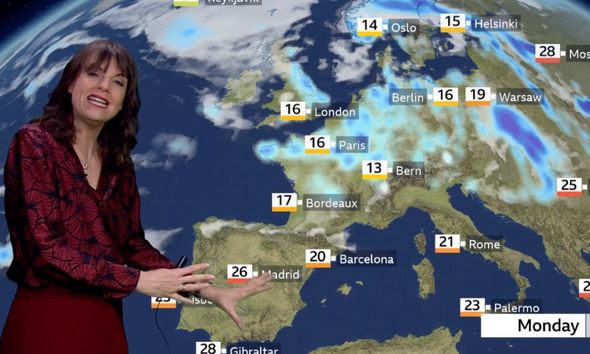 But the weather presenter added how despite the wet weather in northern areas of Europe, it will be a hot week for much of southern Europe next week.

Madrid will be see lots of sunshine and temperatures soar to 26 degrees on Monday, 26 on Tuesday, 26 on Wednesday, 29 on Thursday and  29 on Friday

But Rome will be cooler with temperatures of 21 on Monday, 21 on Tuesday, 21 on Wednesday,22 on Thursday and 22 on Friday.