Home » World News » BBC Weather: Scorching weather to end this week as showers and thunder to hit parts of UK

BBC Breakfast’s Carol Kirkwood forecasted “very high” UV rays are set to blast the UK later on Thursday after the cloudy mornings disappear. Ms Kirkwood added the temperatures are expected to fall as the week comes to an end, with temperatures falling to the low 20s. The meteorologist also forecasted showers will hit parts of England with the warmer temperatures potentially bringing thunder.

“Today, for many of us, it will actually be cooler except for in the southeast where we could still hit 26 or 27 degrees.

“And after this cloudy start, don’t be fooled because the UV levels today almost across the board are high or very high.

“So the forecast for today is a mainly dry one but there are a few showers in the north this morning.” 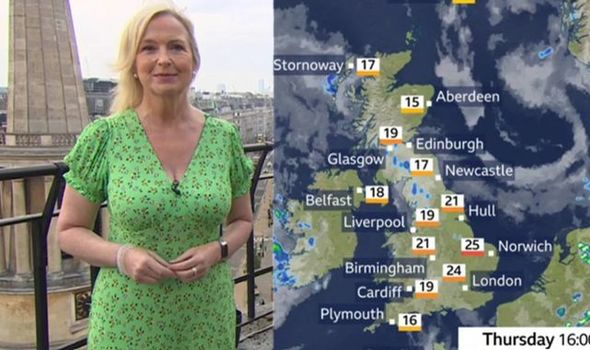 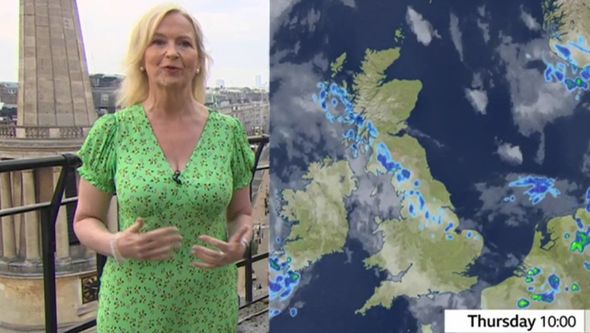 She continued: “And also, although it’s a cloudy start, we will see it brighten up but it will be cooler than it was yesterday for many.

“What we have at the moment is yesterday’s weather front, which produced some showers, some of them are heavy and sundry, moving north. 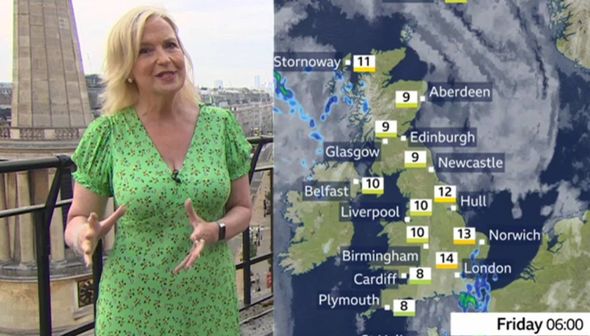 “There’s a fair bit of cloud around today to start with but through the day that will also tend to break up and we’ll see some sunny spells develop.

“Temperatures widely in the low to the mid-20s, in the southeast 25 to about 27 degrees in East Anglia.

“And as we head on through the evening and overnight what you’ll find is we’ll see some shows coming up across the Channel Islands, the English Channel, up through the Midlands and over towards the southeast.

“Especially so in the southeast where they could be heavy and thundery. 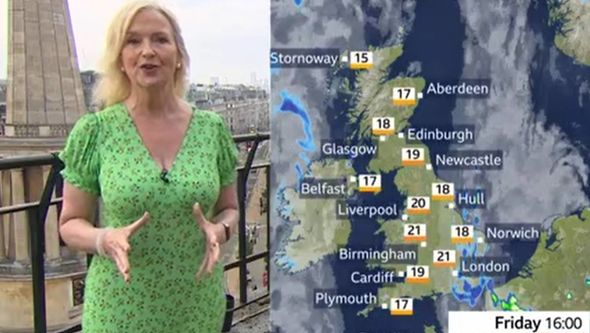 “In the northwest, we’ll also have some showers but it’ll be a fresher night than the one that has just gone which was quite muggy.

!And then as we head into [Friday] we still will have those showers in the southeast, drifting a little bit farther north and possibly as far west as Greater London.

“They could have some rumbles of thunder in them as well.

“Out towards the west the shower should fade and we’ll see more sunshine develop.

“Temperatures tomorrow coming down in the southeast and again for most of us will be in the high teens or the low 20s.

“Which is closer to where they should be at this stage in June.”

This week saw the hottest day of the year record broken twice with temperatures reaching around 27.1C on Monday and then 28.3C on Wednesday.