Excusez-moi: Biden calls Macron to say he should have been more open about submarine negotiations and agrees to meeting – French president relents and says his ambassador will return to DC next week

President Joe Biden finally hold a phone call with French President Emmanuel Macron after a week-spat – and acknowledged that ‘open consultations’ with the longtime ally might have helped.

The White House and France released a joint statement on the call, which came after after the U.S., Britain and Australia infuriated the French with a new deal for Australia to acquire nuclear-powered submarines.

It spells out that the call took place ‘at the request’ of Biden.

‘The two leaders agreed that the situation would have benefitted from open consultations among allies on matters of strategic interest to France and our European partners. President Biden conveyed his ongoing commitment in that regard,’ according to the statement.

‘The two leaders have decided to open a process of in-depth consultations, aimed at creating the conditions for ensuring confidence and proposing concrete measures toward common objectives,’ according to the statement.

It says they will meet in Europe at the end of October, a likely reference to the upcoming G20 summit in Rome.

‘President Emmanuel Macron has decided that the French Ambassador will return to Washington next week. He will then start intensive work with senior US officials,’ it says.

The statement concludes: ‘President Biden reaffirms the strategic importance of French and European engagement in the Indo-Pacific region, including in the framework of the European Union’s recently published strategy for the Indo-Pacific. The United States also recognizes the importance of a stronger and more capable European defense, that contributes positively to transatlantic and global security and is complementary to NATO.

The French version of the statement is slightly different at a key section, saying open consultations would have ‘avoided the situation.’ 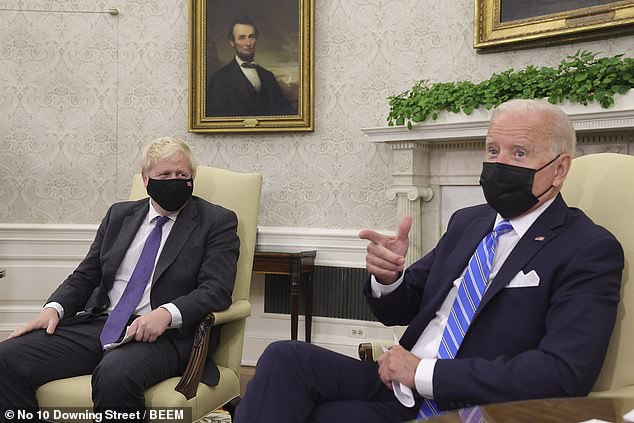 President Joe Biden is set to speak with French President Emmanuel Macron. On  Tuesday, he met at the White House with Prime Minister Boris Johnson

In the framework of their joint fight against terrorism, the United States commits to reinforcing its support to counter-terrorism operations in the Sahel conducted by European states.’

The call finally happened after the two sides have discussed a possible phone call for days, after Macron recalled France’s ambassador to the US for consultations in protest of the move.

Macron expected ‘clarifications and clear commitments’ from Biden in the call, Macron’s office said in advance.

The White House has not signaled any new commitments are coming, although at the UN on Tuesday Biden repeatedly stressed the value he places on U.S. alliances.

Biden has yet to address the situation directly himself in public, after avoiding in-depth questioning for days.

He spoke virtually to a covid summit with world leaders Wednesday, but reporters were ushered out while the secretary general of the UN was speaking, providing no chance for US reporters to ask him questions.

‘We’re still working on the scheduling of it — with President Macron in the coming days,’ White House press secretary Jen Psaki said about the call on Monday.

‘And what I expect the President will do on that call is reaffirm our commitment to working with one of our oldest and closest partners on a range of challenges that the global community is facing,’ she said.

The call comes after Johnson, on a trip to the Capitol Wednesday, appeared to mock the French outrage.

He said it was time for some ‘dear friends’ to ‘prenez un grip.’

Macron’s office said the call, which was requested by Biden, is to discuss ‘the crisis of trust’ that led to the unprecedented recall of the French ambassador to the U.S. last week. 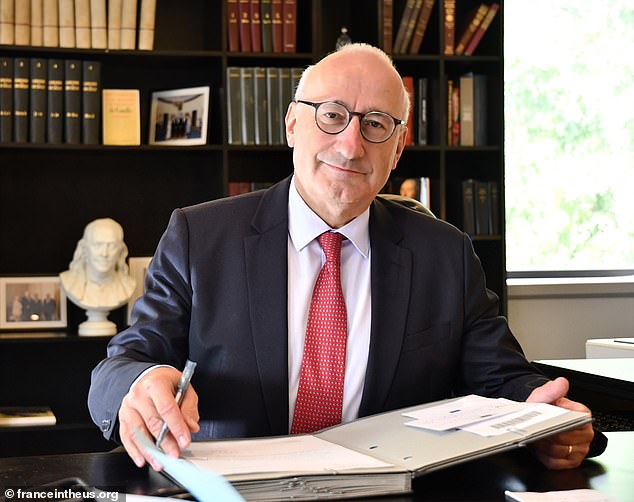 France recalled its ambassador to the U.S. Philippe Etienne, amid the fury 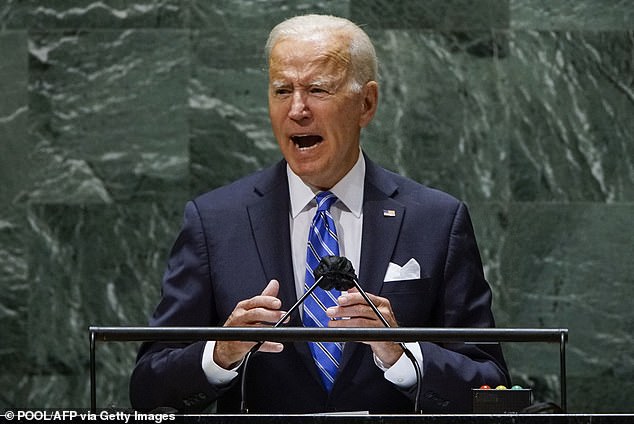 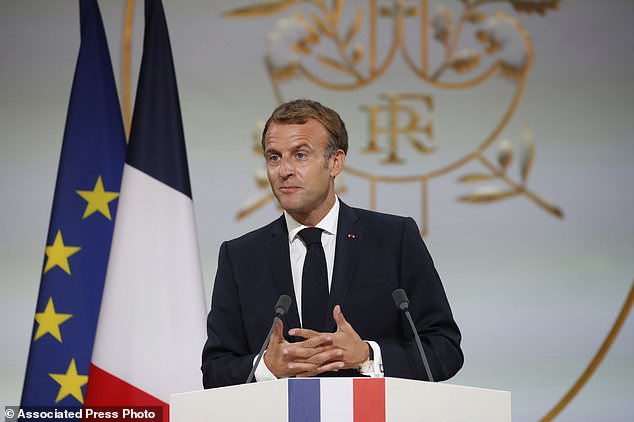 French President Emmanuel Macron delivers a speech during a meeting in memory of the Algerians who fought alongside French colonial forces in Algeria’s war, known as Harkis, at the Elysee Palace in Paris, Thursday, Sept. 20, 2021. Macron’s speech is the latest step in his efforts to reconcile France with its dark colonial past, especially in Algeria. (Gonzalo Fuentes/Pool Photo via AP)

Macron expects ‘clarifications on the American choice to keep a European ally away from key exchanges on an Indo-Pacific cooperation,’ the statement said.

Biden has long stressed his diplomatic experience, with decades in the Senate, including some running the Senate Foreign Relations Committee before serving as vice president.

The Indo-Pacific defense deal between the U.S., Australia and Britain was announced last week by Biden, with France being formally informed only a few hours beforehand, according to French diplomats. The pact will see Australia cancel a multibillion-dollar contract to buy diesel-electric French submarines and acquire U.S. nuclear-powered vessels instead.

France wants an acknowledgment that talks that ‘should have been held’ between allies before the deal was made ‘did not happen’ and that it is raising ‘a matter of trust about which we need to draw together all the consequences,’ according to Macron’s office.

Paris is calling for ‘acts, not words only,’ including on ‘the full recognition by our American ally of the need to strengthen the European sovereignty and the importance for Europeans to greater involvement in their defense and security,’ Macron’s office said.

France also wants the ‘common commitment in the fight against terrorism’ to be reaffirmed.

French government spokesperson Gabriel Attal said the issue was raised by Macron during a weekly Cabinet meeting on Wednesday. The call with Biden aims to bring ‘clarifications’ on ‘the conditions of the American re-commitment in an relationship between Allies,’ Attal said.

France´s European Union partners agreed Tuesday to put the dispute at the top of bloc´s political agenda, including at an EU summit next month.

The French presidency categorically denied a report by Britain’s Daily Telegraph newspaper published on Wednesday saying Macron could offer the country´s permanent seat at the U.N. Security Council to the European Union if the bloc backs his plans on EU defense.