Day two of the Ashes Test at the SCG between Australia and England was how it is supposed to be with the sun mostly out, a regular supply of boundaries, a beer or two and, after late morning, uninterrupted play.

We forgot for a few hours the COVID-19 statistics and were far more concerned by batting averages.

The question for those arriving under ominous skies was what to wear. Pink with shorts or a summer dress (that included some guys) seemed to be the go – but with wet weather gear at close range. 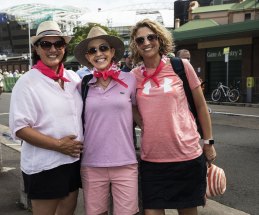 Rebecca Dam from Darlinghurst knows a thing or two about being prepared for a day at the cricket having played as an opening bowler for Australia “at a time when women players wore culotes”.

Dressed with a bit of a pink theme with her two friends, she said: “It’s about positive thinking. We looked at the radar.”

Friend Anna Crawford, also from Darlinghurst, said: “I have a big lesbian Gortex jacket and an umbrella.”

Richie Benaud was everywhere. There’s 350 of him at the Test. He’s in the gents, he’s queuing up for a beer and he’s always holding a Channel Nine blow-up microphone. More vocal even than the Barmy Army, they take up most of a stand at the SCG. There’s even a few “Richettes”. 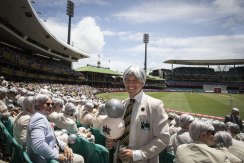 The much loved cricketer and commentator, who died in 2015, lives on in the passion of those who emulate his mannerisms and looks. Steve Blacker, co-founder of the Richies, said COVID-19 had cost them a few attendees.

“We basically like to have a song for every player, to get behind them and encourage them,” he said. “We’ve got a few new songs this year for the SCG like the Scotty Boland song – it’s the theme to the Flintstones. It’s just something that’s catchy and sounds good on the trumpets.”

Do they barrack the English team? “No, Richie would want us to applaud good play from both teams, that’s in our code of conduct, but there’s a bit of healthy banter – we play cricket against the Barmy Army,” Blacker said.

The Barmy Army were here, but not in force due to their troops being grounded back home. How many here, we asked Tony Emmerson. “It’s difficult to say, we are all spread out,” he said. “The Australians have done a very good military manoeuvre of infiltrating the Barmy Army. Some of the Australians around us are joining in Barmy Army songs which is very spirited. 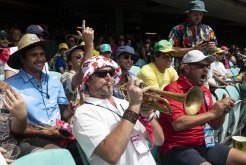 The Barmy Army’s presence is very much reduced this year due to travel restrictions with the COVID-19 pandemic but a few faithful ones have made it to the Ashes Test v England, like Anthony Emmerson in the red t-shirt at the SCG on Wednesday. Credit: Jessica Hromas

“There’s a lot of hardcore guys back in England who go on every single tour, we wish they were here because it is hard when you are in the beating down sun being beaten by the Australians and then, all of a sudden, the Australian fans get a bit of confidence. There’s safety in numbers but we’ll do the best we can.” 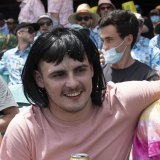 A mother has pledged to donate $1000 to the McGrath Foundation if her son, Owen Barker, dressed up as Dora the Explorer at the cricket. Credit:Jessica Hromas

A picture is worth a thousand words. And this one, now it has been published in the Herald, is worth $1000. Owen Barker, 22, for reasons best known to himself, thought it would be good to go to the Test dressed as Dora the Explorer. We think the fringe is spot on. Shame there was no time for a shave.

His mum Shivorn Blackman from Penrith, who works at a hospital, thought it would be good to embarrass him. She called the McGrath Foundation and said she would donate $1000 if they could get his picture on TV or in the Herald.

“The outfit cost me $40 in total. My mum would pay anything to make me look an idiot,” Owen said.

Shivorn said her mother had had breast cancer. “I know the breast care nurses at work and I got paid last night so I decided on the idea for the $1000 donation if his picture appears,” she said.