Boris Johnson has vowed to deliver Brexit and keep hold of the £39billion divorce payment from the EU unless better exit terms are offered – as he insisted only he can defeat Labour and the Brexit Party.

The leadership campaign front-runner pleaded with Conservative MPs and members, saying he would be prepared to refuse to pay the promised £39 billion to the European Union – and would step up preparations to counter no-deal ‘disruption’.

And Sajid Javid’s campaign received a boost with an endorsement from Scottish Tory leader Ruth Davidson.

In his first major interview of the campaign, Mr Johnson told the Sunday Times he could defeat the twin threat posed by the leaders of the Brexit Party and Labour – comparing them to the sea monsters from Greek mythology which troubled Odysseus.

‘I truly believe only I can steer the country between the Scylla and Charybdis of Corbyn and Farage and on to calmer water.

‘This can only be achieved by delivering Brexit as promised on October 31 and delivering a One Nation Tory agenda.’

On Brexit, he said he would scrap the backstop – something the EU has so far refused to do – and would settle the Irish border issue only when Brussels is ready to agree to a future relationship.

The £39 billion settlement would only be paid when there is ‘greater clarity’ about the way forward, he said. 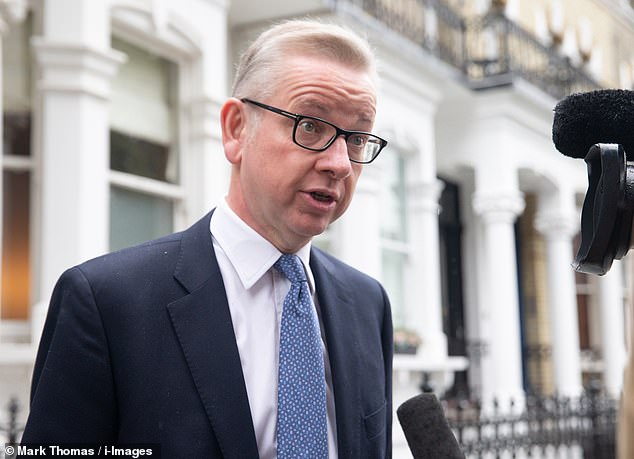 ‘I always thought it was extraordinary that we should agree to write the entire cheque before having a final deal,’ he said. ‘In getting a good deal, money is a great solvent and a great lubricant.’

The former foreign secretary received backing from prominent Brexiteer Steve Baker – who had been considering his own leadership bid.

Mr Gove sought to focus once more on policy issues after the revelations about his past cocaine use.

Writing in the Sunday Telegraph, he set out a ‘pro-business economic plan’ to take on Mr Corbyn’s ‘Marxist message’.

Mr Gove said his plan would mean ‘reducing the regulations which hold business back’, cutting taxes and ‘using the opportunity of life outside the EU to look to replace VAT with a lower, simpler sales tax’. 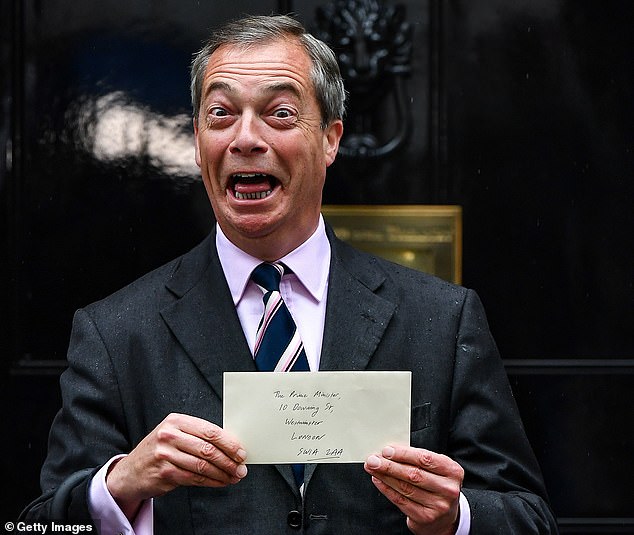 Pictured: Nigel Farage, leader of the Brexit party hands in a petition to 10 Downing Street on June 7, 2019 in London

Ms Davidson’s decision to back Mr Javid came as he set out his own plan to tackle the Irish border issue – by spending hundreds of millions on a technological solution.

The support of Ms Davidson, a popular figure in the party who has revitalised the Tories in Scotland, was welcomed by Mr Javid.

‘Ruth knows a winner when she sees one,’ he told the Mail on Sunday.

The Home Secretary also said there is a moral duty on the UK to pay for measures at the Irish border in an effort to secure a Brexit breakthrough.

‘I think it’s morally justified to pay for that because we both have signed the Good Friday Agreement, we are both absolutely committed to peace on the island of Ireland and – given that we voted to leave and that’s what’s changing the status quo on the island of Ireland – I think it’s morally right that we say, ‘look, we’ll pay because we’ve caused this’.’

Rory Stewart’s camp, meanwhile, said he is the challenger best placed to take on Mr Johnson, pointing to polling by Opinium which puts him neck-and-neck with the former foreign secretary on the question of ‘would they make a good prime minister’.

Mr Stewart said it is ‘very encouraging’, but he cautioned there are ‘many steps still between here and Downing Street’.

As Theresa May resigned as Tory leader on Friday, the starting gun was fired for the race to replace her.

The nomination process will take place on Monday, with candidates requiring eight MPs to back them in order to enter the race, with the first round of voting on Thursday.