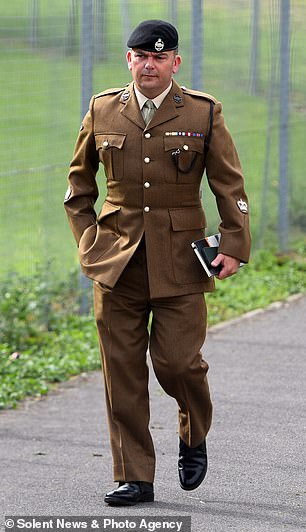 Paul Stafford (pictured), who holds the position of Warrant Officer class 2, sexually assaulted the Lance Corporal on the way back from a nightclub

A British Army warrant officer has been convicted of sexual assault after groping a female soldier’s thigh and ‘grabbing’ her breast in a taxi.

Paul Stafford, 40, who holds the position of Warrant Officer class 2, sexually assaulted the Lance Corporal on the way back from a nightclub.

WO2 Stafford repeatedly put his hand on his victim’s thigh – despite her telling him ‘don’t do that’ – before reaching for her breast.

He then tried to take her back to the mess with him, before colleagues stepped in and intervened, a court martial heard.

WO2 Stafford, of the Royal Tank Regiment, denied sliding his hand under her dress and claimed he fell asleep in the taxi.

But he was found guilty of sexual assault following a trial at Bulford Military Court, Wiltshire.

Prosecutor Lieutenant Colonel Michael Culver told the court the incident happened in the early hours of the morning inside a seven-seater taxi.

The vehicle was taking a group of soldiers back to camp after a night out in nearby Pembroke, Wales.

The woman said she was sat between WO2 Stafford – who was his squadron’s Sergeant Major – and a Major who was the commanding officer, while there was also a driver and three other soldiers in the vehicle.

Lt Col Culver said: ‘The Major fell asleep and it was then that [WO2 Stafford], sitting on [her] left hand side, put his right hand on her left thigh.

‘She removed his hand and said “don’t do that” but he repeated this action several times.

‘He also used his right hand around her neck to bring her closer to him and touch her breast. She then removed his hand and told him not to do that. 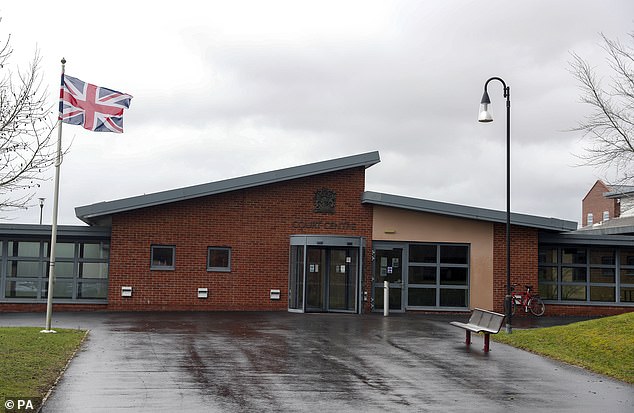 ‘When the taxi returned to camp, the occupants got out and [WO2 Stafford] then he grabbed [the female Lance Corporal] by the arm and pulled her in the direction of the mess.

‘She said “get the f**k off me” and one of the men nearby stepped in to separate them.’

The female Lance Corporal, who cannot be named for legal reasons, told the court she had been to a pub with colleagues in Pembroke before heading to a nightclub shortly before midnight.

WO2 Stafford was in that club and she said they left at about 3.30am.

She said that ‘a couple of minutes’ into the journey back to camp ‘WO2 Stafford put his right hand on my left thigh. I asked him to stop… It was under my clothing, I was wearing a dress’. 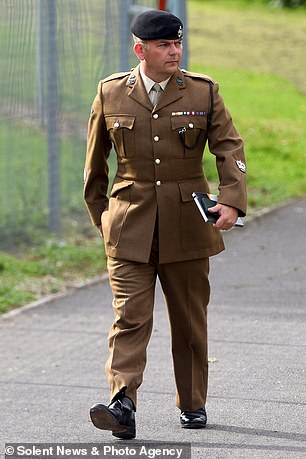 She added: ‘He carried on doing it… He tried it once more and then reached his arm around [my neck] and touched my left breast.

‘As he reached around me he pulled me in towards him and then managed to get his hand on my left breast.

‘I was angry and in shock that he tried to do that… It all happened quite quickly.

‘[Back at camp] WO2 Stafford grabbed my arm and tried pulling me down the road. He mentioned that he wanted me to go back to the mess with him. I told him to get the fuck off.’

Asked by Judge Advocate Alastair McGrigor whether the touch on the breast was ‘fleeting or something more substantial’, the female Lance Corporal said: ‘It was more like a grope, a grabbing.’

The court heard WO2 Stafford was interviewed by military police and claimed he fell asleep in the taxi and nothing inappropriate took place.

WO2 Stafford claimed he spoke with the female Lance Corporal the next day and she was ‘friendly’ and showed ‘no bad vibes’ about the night before.

The officer, who has served more than 21 years in the military, told the court he could not remember the journey back to camp because he was asleep in the taxi.

But Lt Col Culver accused the officer of ‘lying to protect yourself’.

He was found guilty and will be sentenced on September 10 for a single charge of sexual assault.

What is a Warrant Officer Class 2 rank mean?

A Warrant Officer is a rank in the British Armed Forces.

Because they do not hold a commission, they are not saluted, but addressed as sir or ma’am by subordinates.

In the rank of Warrant Officer there are two ranks, Class 2 and Class 1.

Class 1 is the senior rank, with specialist roles in the technical and non-combatant services.

Class 2 has similar roles and responsibilities to WO1, but at a sub-unit level (below regimental).