London: Buckingham Palace has announced plans to throw the boss – and her subjects – an over-the-top party next year to mark the Queen’s unprecedentedly long reign.

In 2022, Queen Elizabeth II is expected to become the first British monarch to celebrate a Platinum Jubilee, marking 70 years of her reign, having acceded to the throne in 1952 aged just 25 years old.

Her Golden Jubilee in 2002 and her Diamond Jubilee in 2012 included star-studded concerts featuring Paul McCartney and Elton John. 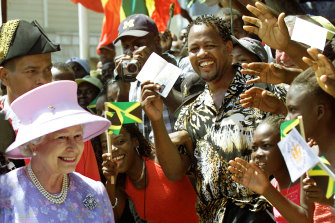 The Queen smiles to waving crowds in Jamaica, part of her Golden Jubilee tour.Credit:Reuters/File

There will be a four-day bank holiday weekend from June 2, a concert of stars, a pageant and street parties.

The Queen, 95, will begin a year of celebrations throughout the UK and the Commonwealth on the anniversary of her accession in February.

The Platinum Jubilee Weekend will start with Trooping the Colour, which marks the Queen’s official birthday, when more than 1400 parading soldiers, 200 horses and 400 musicians will gather at the Palace and move along The Mall to Horse Guard’s Parade, joined by Members of the Royal family on horseback and in carriages. 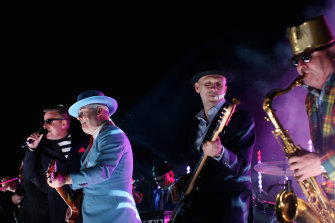 The band Madness performs on the rooftop of Buckingham Palace during the Queen’s Diamond Jubilee in 2012.Credit:Getty Images

The Parade closes with an RAF fly-past watched by the Queen and members of the Royal family from the Buckingham Palace balcony.

On the same day beacons will be lit across the UK, Channel Islands, Isle of Man and Overseas Territories, and for the first time also in the capital of every Commonwealth country.

On Friday, June 3 a Service of Thanksgiving will be held at St Paul’s Cathedral, then on Saturday, there’ll be a Platinum Party at the palace, staged and broadcast by the BBC. The Palace said the live concert “will bring together some of the world’s biggest entertainment stars to celebrate the most significant and joyous moments from the Queen’s seven-decade reign”.

UK residents will be invited to apply to attend via a ballot.

On Sunday, June 5, the public will be encouraged to arrange street parties for The Big Jubilee Lunch, before the final event of the weekend, the Platinum Jubilee Pageant, featuring more than 5000 people from the UK and Commonwealth, against the backdrop of the palace.

Officials said it will “combine street arts, theatre, music, circus, carnival and costume and celebrate the service of Her Majesty’s reign, as well as honouring the collective service of people and communities across the country”.

The celebrations will follow a similar format to the Diamond Jubilee weekend 10 years ago, but will be slightly scaled back to take account of the fact that the Queen will be 96 by then.

“There has been some slowing down for several years, but she is still very engaged,” reported BBC royal correspondent Nicholas Witchell after the announcement.

Such elaborate events require months of planning and the announcement provides a glimmer of positivity after the death of Prince Philip, the Queen’s husband of 73 years, the COVID pandemic and a string of unsettling news from Prince Harry and Meghan’s debut on Oprah and damming revelations about the BBC’s interview with Princess Diana, to questions about Prince Andrew’s friendship with American paedophile Jeffrey Epstein.

As the details of next year’s jubilee were announced, the Guardian newspaper reported that “the Queen’s courtiers had banned “coloured immigrants or foreigners” from serving in clerical roles in the royal household until at least the late 1960s, according to newly discovered documents that will reignite the debate over the British royal family and race”.