Home » World News » Castle with own loch and Hollywood guests marketed for £2.25million

Become the king of your OWN castle: 16th century Scottish castle boasting its own loch, Hollywood guests and links to infamous outlaw Rob Roy MacGregor goes on the market for £2.25million

A magnificent ‘A’ listed castle perched on the northern shores of Bardowie Loch complete with Scotland’s oldest original Stone Keep, expansive gardens and a private jetty has gone on the market for £2.25million.

Buyers can bag themselves one of Scotland’s most iconic homes which has connections to the infamous laird Rob Roy MacGregor who made a fortune extracting money from people in exchange for protection from thieves.

Another famous connection is actor Chris Pine, 38, best known for his role as Captain Kirk in the Star Trek franchise, who rented the castle for £20,000-a-month while filming the Netflix production about Robert the Bruce – in which he played the lead role. 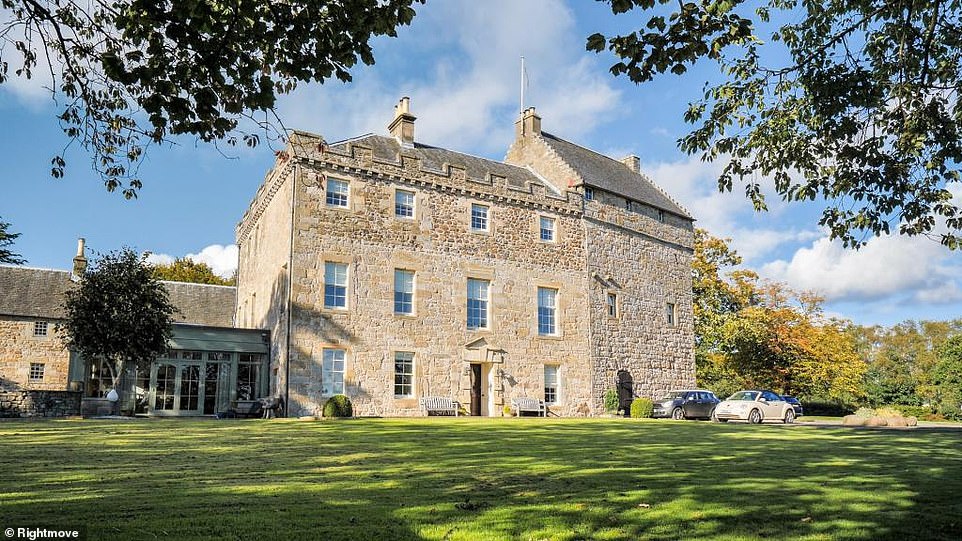 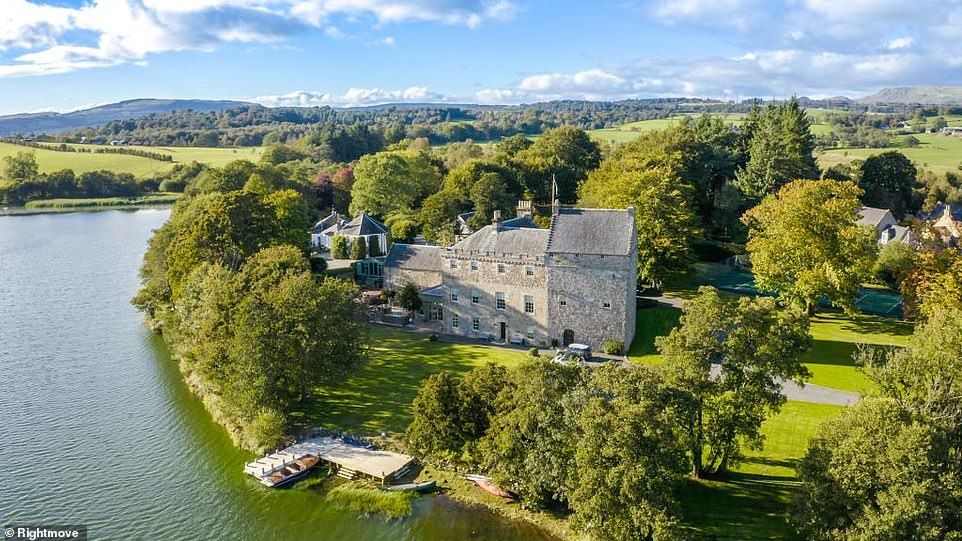 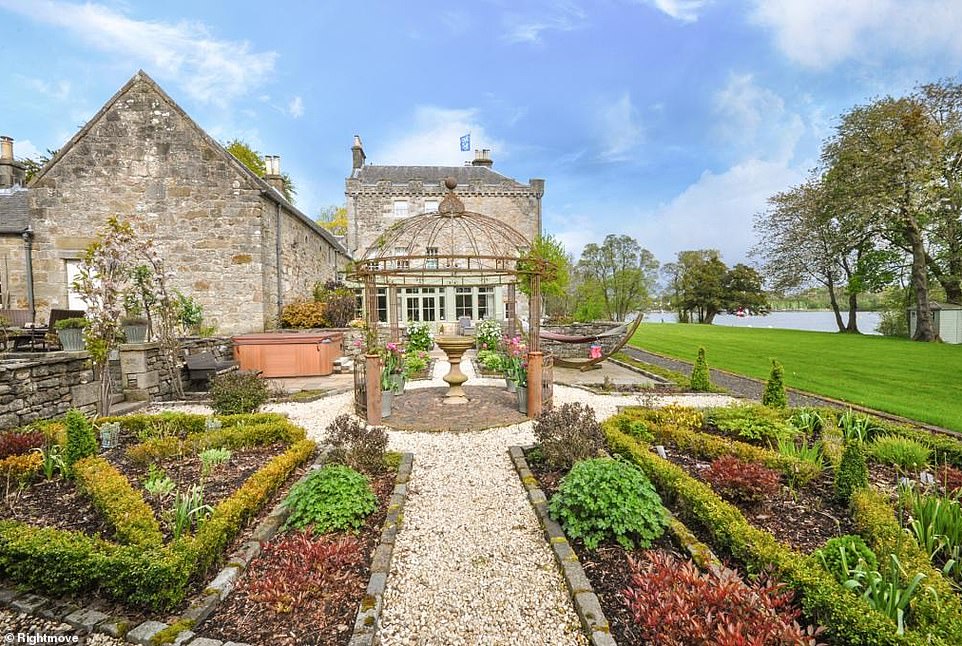 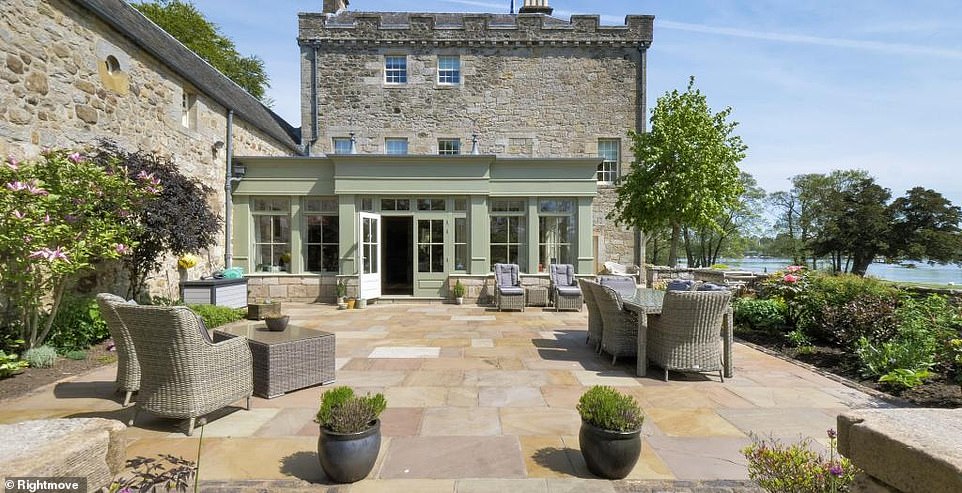 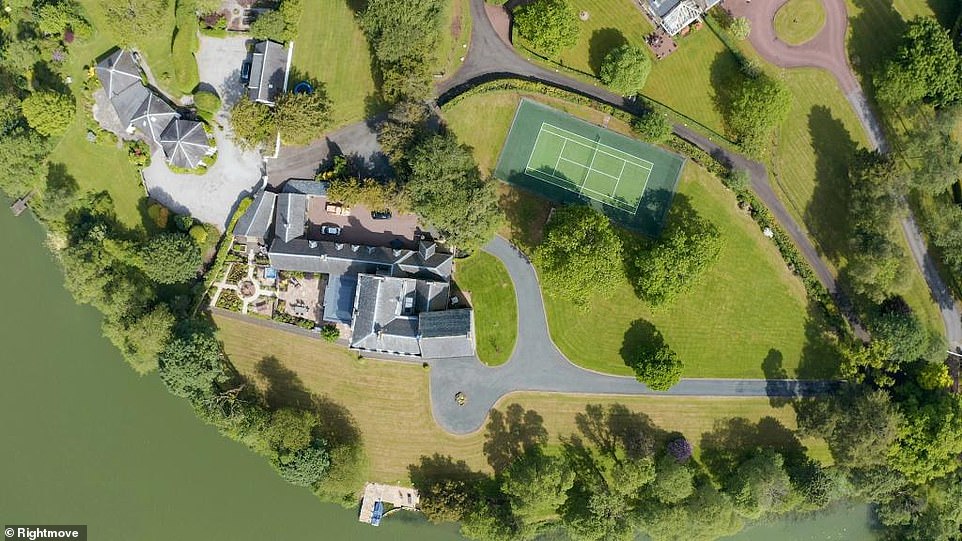 The property was built in 1566 and has breathtaking panoramic views across its expansive gardens and the water, with a decked private jetty, a tennis court and a walled garden bordering the patio.

It is accessed through the reception hall which has an adjoining snug and a large kitchen and dining area which runs the full 40ft length of the original section of the castle.

Next to the kitchen is the main family room with an original stone staircase leading to the large utility room and the boot room.

The first floor has a games room, and the formal drawing room which has brilliant views across the loch through the floor to ceiling windows.

There is also a bedroom and the master suite which includes a master bedroom, adjoining dressing room and a bathroom.

The master ensuite has his and hers sinks, a large double bath and an adjoining shower room complete with a sauna. 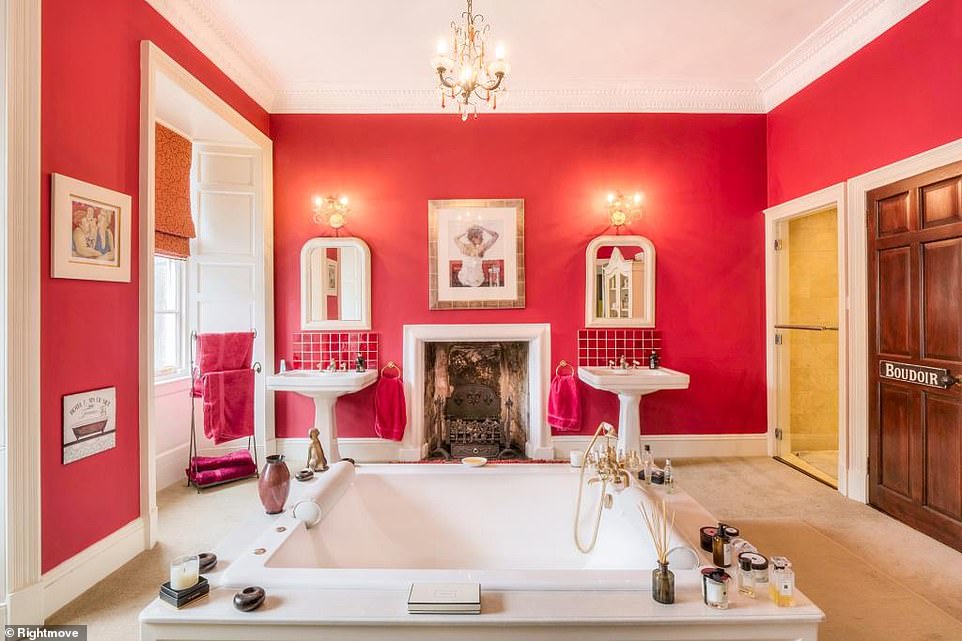 Above is the master ensuite on the first floor, accessed through the dressing room, with his and hers sinks, a shower room, and double bath 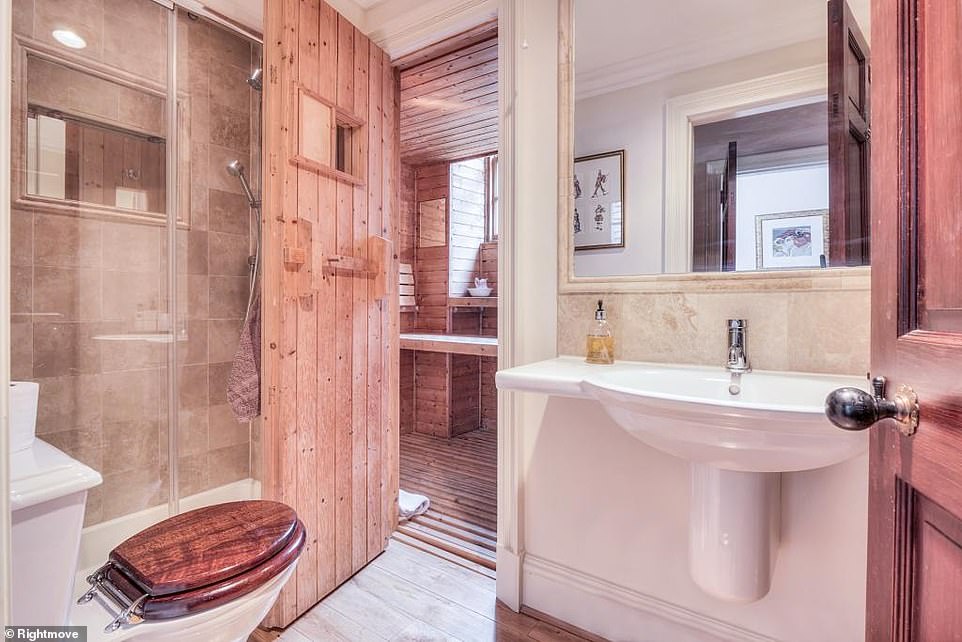 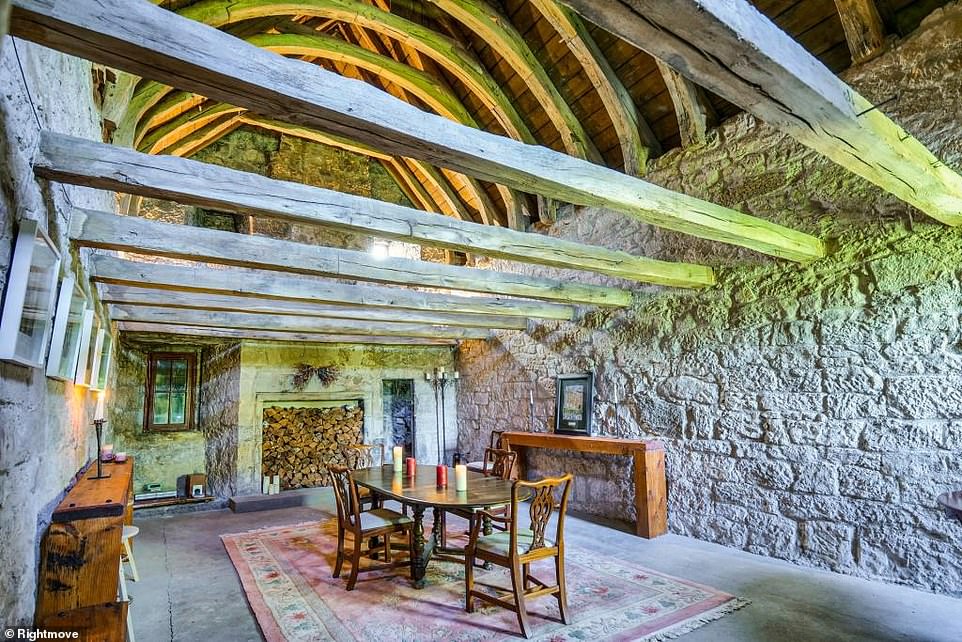 The Great Hall is a two floors high room which is part of the original castle. The turret stone stairs lead up to the battlements 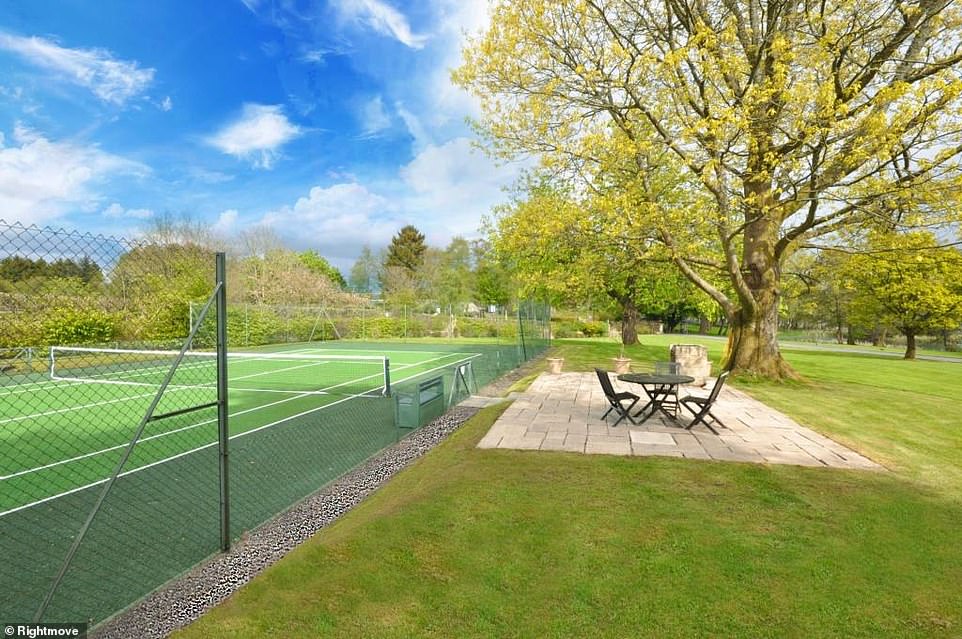 The property, built in 1566, has breathtaking panoramic views across its expansive gardens and comes with a tennis court and a walled garden bordering the patio

A hidden stone staircase takes you to the original Keep which is known as the Great Hall which is two floors high and a turreted stairway leading to the battlements.

The West Wing of the house could be used as a self-contained apartment with a fully fitted gymnasium or potential double bedroom, then an open kitchen living area and a shower room.

The other self-contained apartment is accessible via a separate entrance and comes complete with two en-suite bedrooms, a kitchen and lounge area. 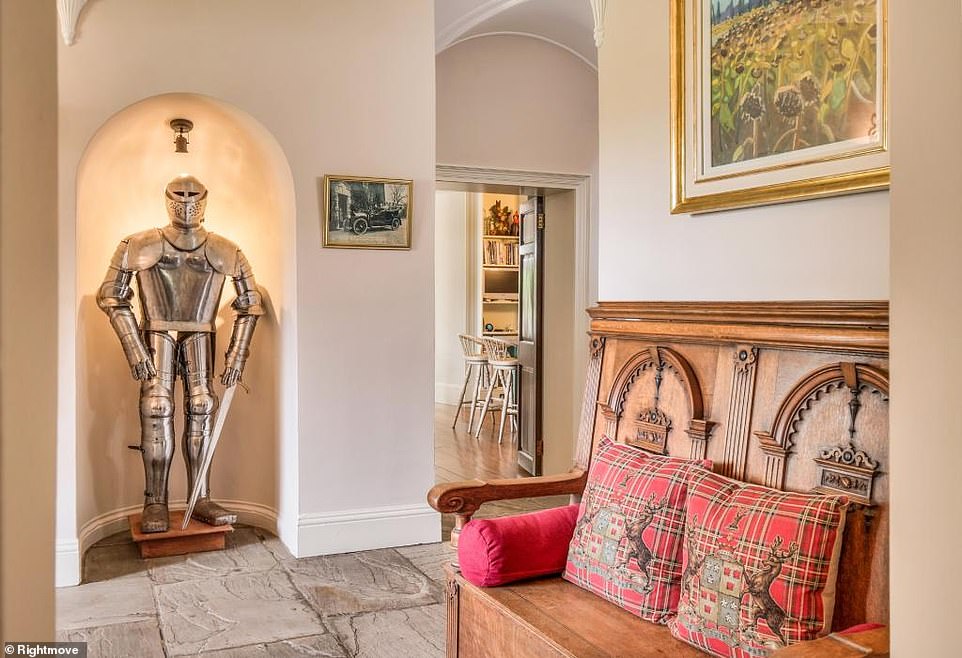 The second floor of the huge property has a further four bedrooms, three of which have ensuites and two of which have dressing rooms 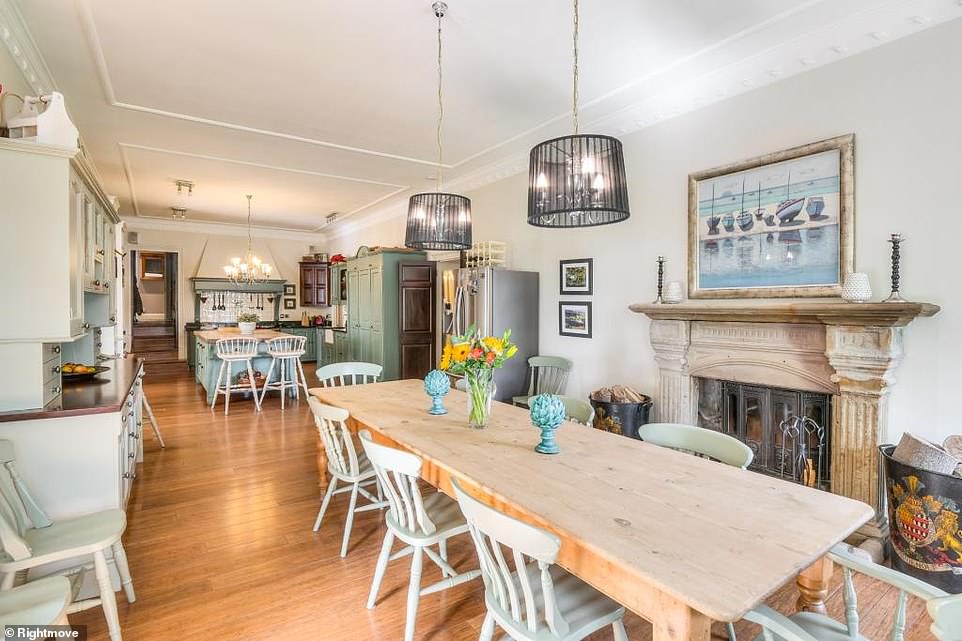 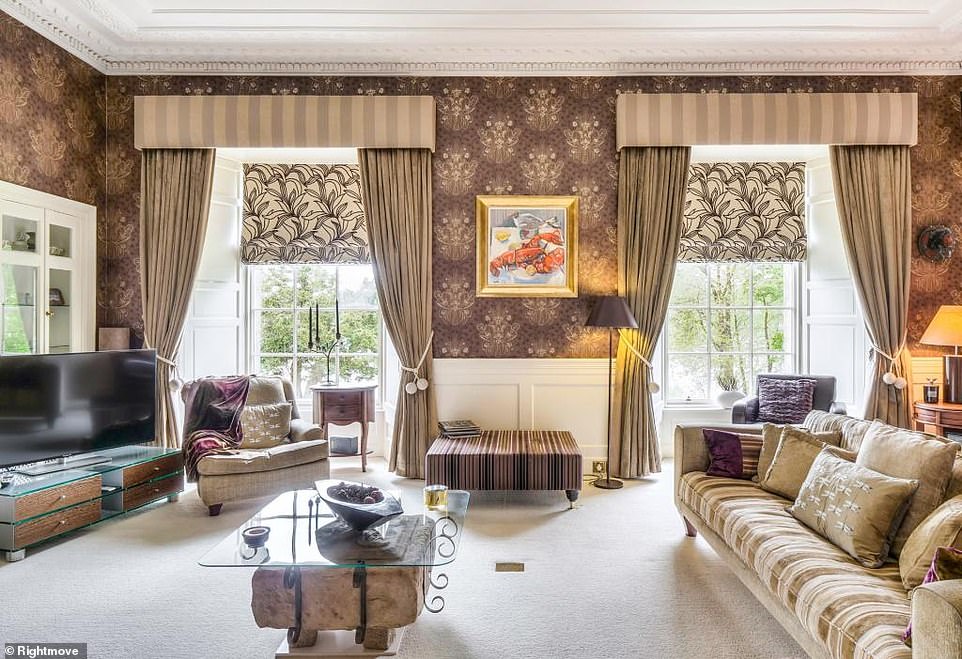 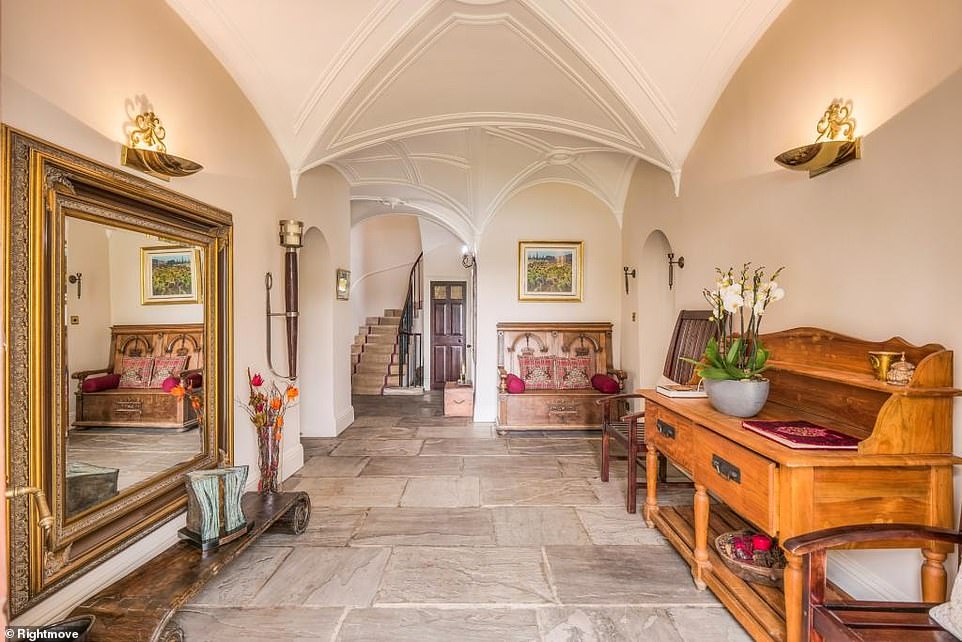 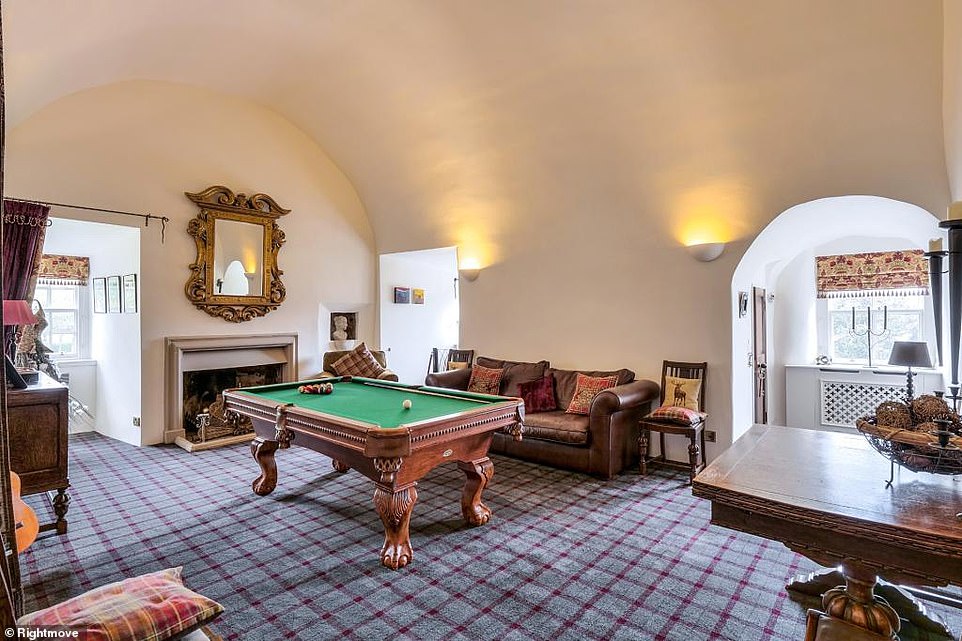 Clyde Property, Bearsden, said the property was ‘a once in a generation opportunity to acquire one of Scotland’s most iconic homes’.

The castle sits in the lush greenery of the rolling countryside and has the oldest lime, tree lined driveway in the whole of Scotland.

Despite looking secluded and isolation the property happens to be seven miles away from Glasgow City Centre and less than three miles from a large of selection of amenities.

The castle also boasts great connections to other cities like Edinburgh and Stirling and has great links to the airports.