China, Saudi Arabia and Russia are poised to join the United Nations Human Rights Council, raising alarms among rights groups, who say the countries are among the world’s “worst rights violators”.

The UN General Assembly is expected to hold elections on Tuesday for 15 seats in the 47-nation council, with the new members serving for three years from January 2021.

“Electing these dictatorships as UN judges on human rights is like making a gang of arsonists into the fire brigade,” Hillel Neuer, executive director of UN Watch, an independent human rights group based in Geneva, said in a statement.

Saudi Arabia was previously on the council until 2019. China, which is under fire over its treatment of ethnic Uighurs in the far western region of Xinjiang and its imposition of a National Security Law in Hong Kong, could also return as a member.

HRW said both countries had a history of using their seats in the council “to prevent scrutiny of their abuses and those by their allies.”

“It’s not good for human rights or for the rights council when the worst rights violators get elected,” Charbonneau said.

Only last month, dozens of nations condemned Saudi Arabia before the council over serious rights violations and demanded accountability for the murder Jamal Khashoggi, a Washington Post newspaper columnist who was killed in the Saudi consulate in Istanbul in 2018.

The council also alleged other serious rights violations in Saudi Arabia, including reports of torture, arbitrary detention and enforced disappearances and HRW noted the Saudi-led coalition also continues to commit war crimes against civilians in Yemen

The conflict has killed more than 100,000 people and created the world’s worst humanitarian disaster, with more than three million people internally displaced and two-thirds of the population relying on food aid for survival. 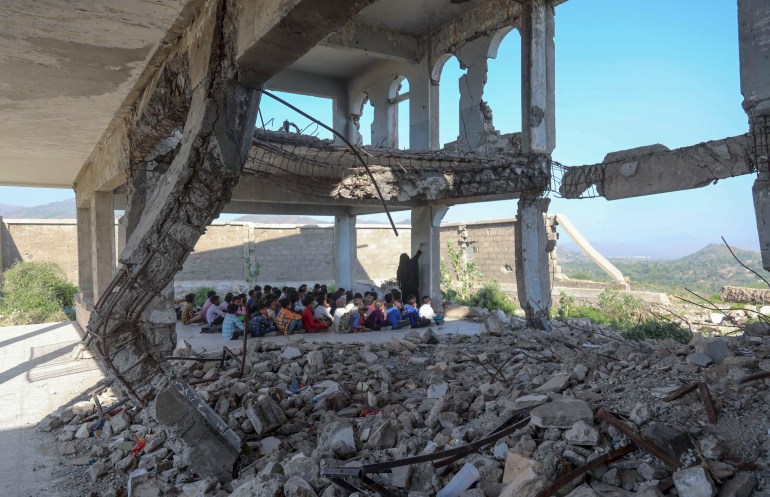 The Saudi-led invasion of Yemen has killed more than 100,000 people and displaced more than three million people [Ahmad al-Basha/AFP]“If Saudi Arabia succeeds, it will show the world that as long as a state has powerful friends and a limitless public relations budget, it can torture and execute its people, including children, with impunity,” he wrote.

China has been under fire over its policies in Xinjiang where the United Nations says some one million Uighurs are being held in camps that China has said are “vocational skills training centres”. United Nations High Commissioner for Human Rights, Michelle Bachelet, has repeatedly asked China – without success – for free access to Xinjiang.

Neuer said it was “morally obscene” that China should have a place on the council.

The Australian Strategic Policy Institute (ASPI) said last month it had identified more than 380 “suspected detention facilities” in the region, and said Beijing appeared to be expanding the network despite claims it was winding down the programme.

A group of 39 countries, led by Germany, signed a statement last week expressing “grave concern” at the situation in Xinjiang and Hong Kong.

Lisa Nandy, the shadow foreign minister in the United Kingdom, said the British government should publicly oppose China’s re-election to the council.

“The UK must take this opportunity to show that solidarity with the Uighur people and demonstrate that we can still be trusted to defend human rights around the world,” she wrote in a letter to Foreign Secretary Dominic Raab, noting that under UN rules election to the council should take into account a candidate country’s promotion and protection of human rights.

Other countries vying for the four seats available to the Asia Pacific region are Nepal, Pakistan, and Uzbekistan, while Russia and Ukraine are competing for one of the two Eastern European seats.

“The presence of abusers on the Council undermines the Council’s legitimacy and contradicts its own charter,” UN Watch said in an official protest to the UN against the candidacy of countries including Saudi Arabia, China and Russia.

It noted Russia’s activities in Syria and its invasion of Ukraine, as well as its attempts to stifle domestic opposition and curb media freedom among other human rights violations.

Bill Browder, the US financier who founded the Global Magnitsky Justice campaign after his Russian adviser, Sergei Magnitsky, was jailed and died after being denied medical treatment, said that if there ever was a day “when the UN was entirely discredited”, Tuesday would be that day.

In the Latin American and Caribbean group, Mexico, Cuba, and Bolivia are running unopposed for three seats. Britain and France are seeking the two seats available to the Western European group and those of others.

“Uncompetitive UN votes like this one make a mockery of the word ‘election,’” HRW’s Charbonneau said.