Revealed – The Eurovision ‘bad boy’ who’s no stranger to controversy: Italian singer who denies snorting cocaine was accused of ‘copying’ hit from another song – as new pictures show him as a fresh faced youngster

The Italian pop star previously suspected by some viewers of snorting cocaine at the Eurovision finals is no stranger to controversy, MailOnline has learned.

Damiano David’s group Maneskin were accused of plagiarism earlier this year after winning a major competition in Italy.

David’s on-screen antics shortly before Maneskin were crowned as winners on Saturday led some viewers to suggest he may have been snorting cocaine during the event, but he vehemently denied it and has since been cleared of drug use.

He tested negative for drugs following an investigation by the European Broadcasting Union (EBU).

The EBU said in a statement: ‘No drug use took place in the Green Room and we consider the matter closed.’

David, 22, said he had been looking down because guitarist Thomas Raggi sitting next to him had broken a glass while they waited for results in the Rotterdam auditorium.

‘It was the moment where they were giving us 12 points and in the meanwhile Thomas broke a glass, so while I was cheering, I saw the glass broken and I was like ‘oh my god – what happened,” explained Damiano. 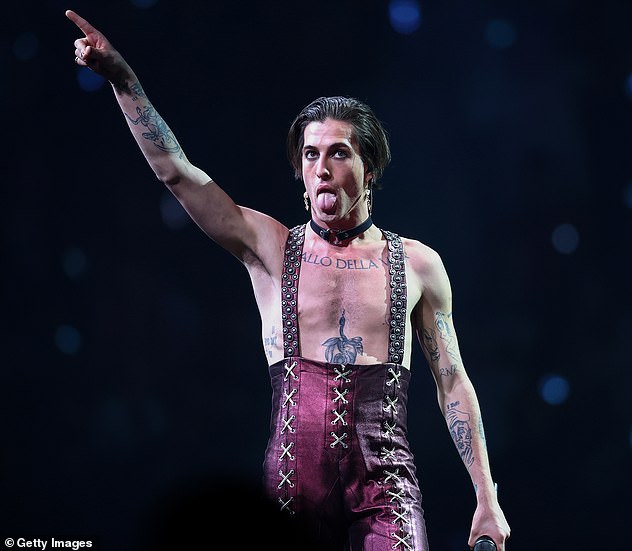 Damiano David, pictured above, has since tested negative for drugs following an investigation by the European Broadcasting Union (EBU)

David (second left), the lead singer of Maneskin has said that he is ‘really offended’ after speculation from viewers that he was taking cocaine during the Eurovision live final 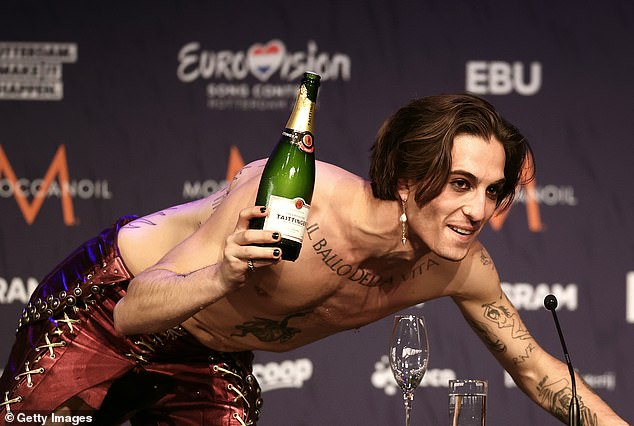 ‘We are young guys with a huge passion for the music and this is overshadowing our win. We will get drug tested and prove that it’s all speculation. I’m getting drug tested today in a few hours. Let me say we are really offended.’

As he mounted an impassioned defence, photos from his schooldays emerged showing he was far more clean-cut as a teenager than his later outrageous stage persona suggests.

Meanwhile, his girlfriend, stunning model and influencer Giorgia Soleri, 25, also posted two photos capturing her nerves followed by ecstasy as he and the band were confirmed as kings of Eurovision.

The couple have been dating for four years, but only revealed the fact a few weeks ago with a photo of them together on Instagram, with a post: ‘After almost 4 years we can say, right?’

They first made their name appearing on the Italian version of the X-Factor in 2017 when all four dropped out of high school to concentrate on music after coming runners up in the final. 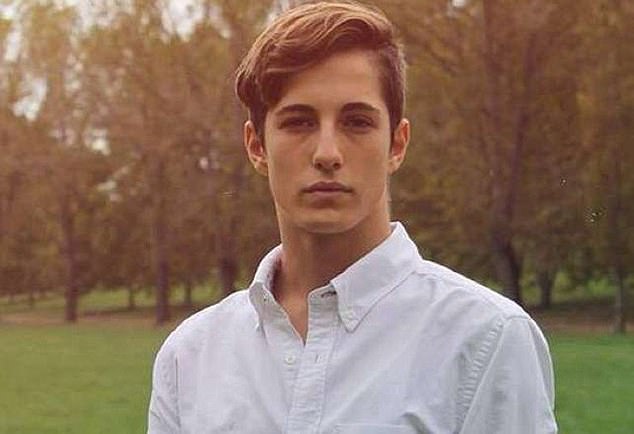 Damiano as a fresh faced youngster. Photos from his schooldays emerged showing he was far more clean-cut as a teenager than his later outrageous stage persona suggests 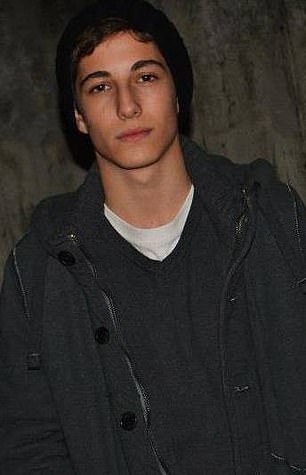 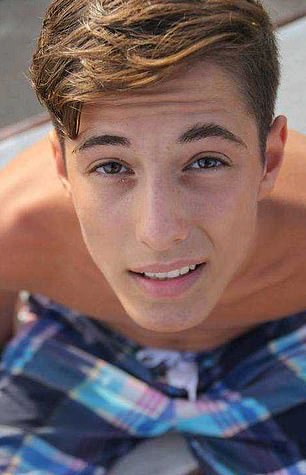 A young Damiano, pictured left and right. His parents Rosa and Daniele, are both cabin crew for Alitalia and he was brought up in Bravetta, a western suburb of the Italian capital 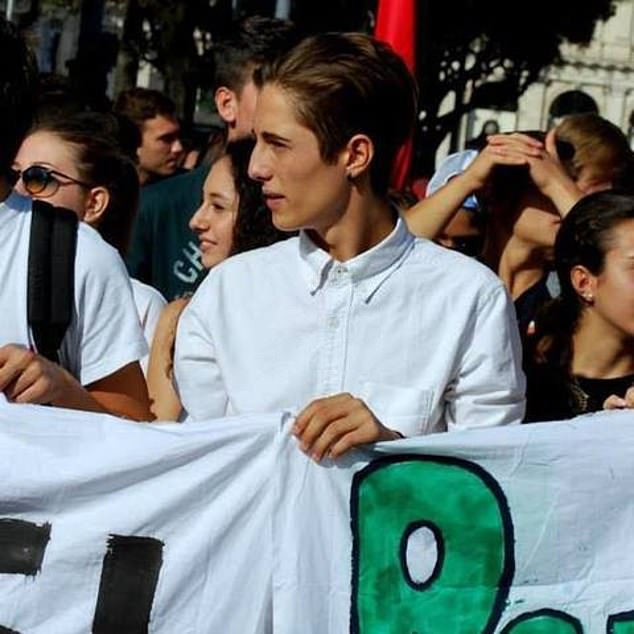 A young Damiano, above. While Victoria de Angelis and Thomas Raggi went to the John F Kennedy Scientific High School in Rome, Damiano took a more classical route, studying Latin and Greek at the Montale School in Rome

Their audition for the competition ‘Kiss This’ featured Damiano stripping to the waist and pole-dancing on stage.

But the group’s success in Italy as they were picked as the country’s Eurovision contenders also attracted controversy earlier this year.

They were forced to defend themselves against plagiarism accusations over their crowd-pleasing hit, Zitti e Buoni [be quiet and good].

In March when the group won Italy’s biggest televised pop competition and Eurovision qualifier, the San Remo festival, some social media users called for them to be disqualified after highlighting the similarities with a song FDT by the Turin-based duo, Anthony Laszlo, which was released in 2015 by the Inri label.

Anthony Laszlo’s producer Dade compared the choruses of the two songs on his Instagram, with the comment ‘something doesn’t add up’. 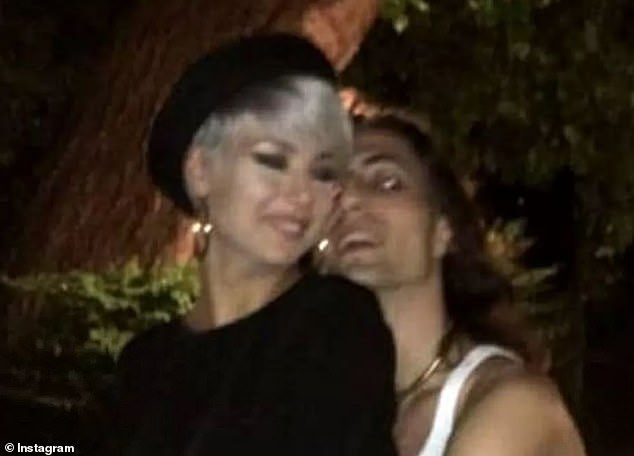 Damiano and his girlfriend of four years Giorgia Soleri, a model and influencer. The couple have been dating for four years, but only revealed the fact a few weeks ago with a photo of them together on Instagram 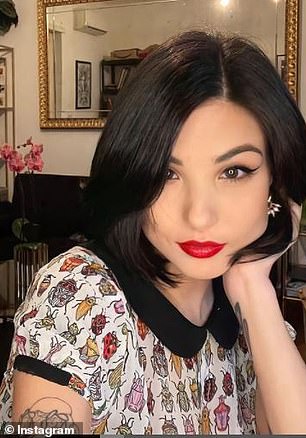 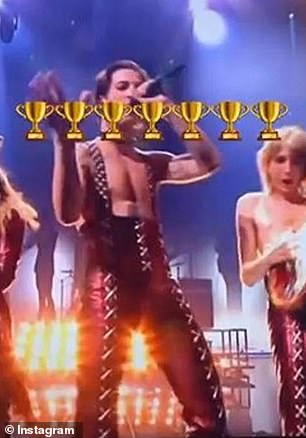 Giorgia Soleri, pictured left, and her Instagram post when her boyfriend was on stage in Rotterdam, Netherlands, on May 22 (right)

Then another Italian group called Nebra claimed the song had the same guitar riff as a 2018 song of theirs.

But their label Sony Music Italia dismissed the plagiarism charges after conducting a technical examination.

Some web commentators said that it was likely an unconscious plagiarism, as no one would be brazen enough to go to the San Remo competition watched by 10m Italians, with a song clearly borrowed from another group.

There was also a row at the time about how it was unfair that they were supported by Italy’s biggest influencer couple, Chiara Ferragni and Fedez, who have 35million followers between them and told fans to vote accordingly.

She was only 15 when she lost her Danish-born mother Jeannet from cancer at the age of just 15. Her sister Veronica was only 12.

After the triumph, Victoria’s grandmother Elin Uhrbrand told Danish broadcaster DR: ‘Victoria lost her mother five years ago, so it affects me on more than one level. I wish I could see her mother experience the success her daughter is having now. 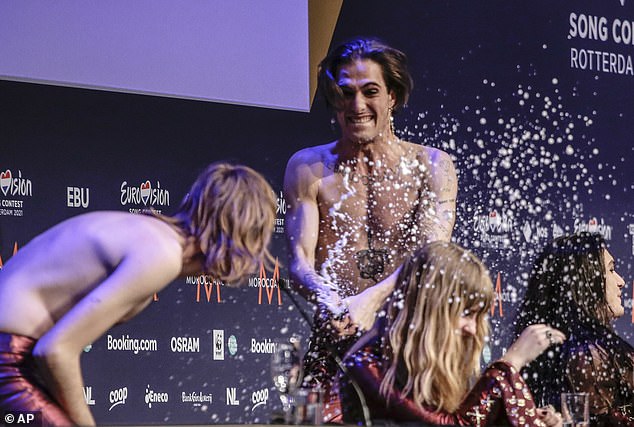 Maneskin’s bassist Victoria De Angelis (second from right) said: ‘We’ve never had use of drugs and we don’t want to spread this kind of message’ 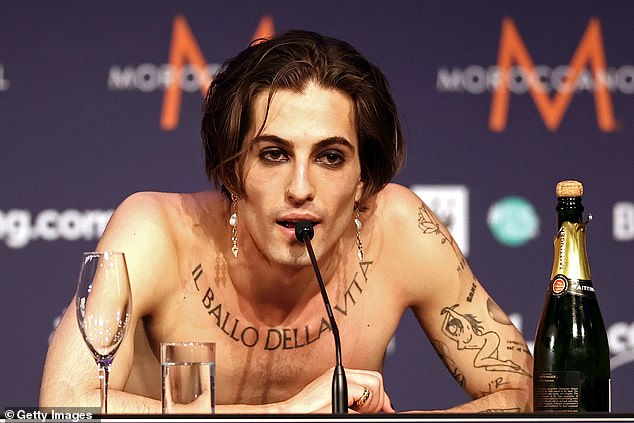 ‘That’s probably also why it makes more of an impression on me than it would have done under other circumstances.’

Victoria’s mother and her Italian father Alessandro founded a travel agency in Rome and set up home in the upmarket central district of Monteverde.

Damiano David and bassist Victoria first met at middle school in Rome where they also knew guitar player Thomas Raggi. But it was after the trio had gone onto different high schools that they formed a band in 2015, recruiting fourth member Torchio through a Facebook ad.

While de Angelis and Raggi went to the John F Kennedy Scientific High School in Rome, Damiano took a more classical route, studying Latin and Greek at the Montale School in Rome. None of the band were privately educated.

His parents Rosa and Daniele, are both cabin crew for Alitalia and he was brought up in Bravetta, a western suburb of the Italian capital which is quite run-down, but handy for Leonardo da Vinci airport.