How are you feeling? Ruff! Cocker Spaniel is swabbed for Covid-19 as South Korea begins testing pets that show coronavirus symptoms

South Korea is conducting COVID tests on pets with coronavirus symptoms as a Cocker Spaniel was spotted receiving a swab on Wednesday.

The eight-year-old female pooch, owned by a coronavirus patient in Seoul, underwent the procedure after showing fever symptoms, including a runny nose.

She will now be isolated at home for 14 days with only its owner for company, the Seoul Metropolitan Government said.

It is thought that neither cats nor dogs can pass Covid-19 on to humans, but some have been shown to be able to catch it themselves. 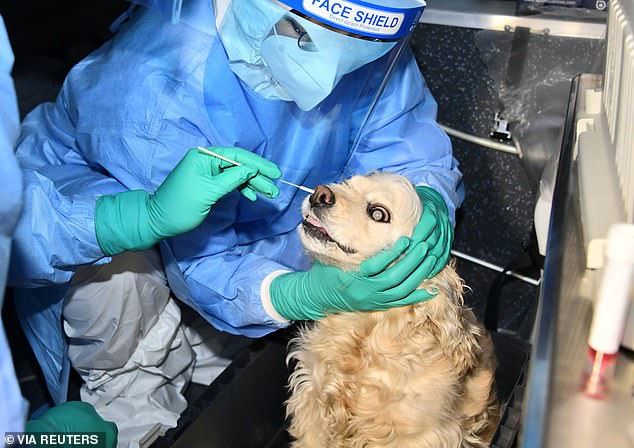 The eight-year-old female Cocker Spaniel living in Seoul underwent the procedure after suffering a runny nose. She is pictured receiving a nasal swab from health workers today 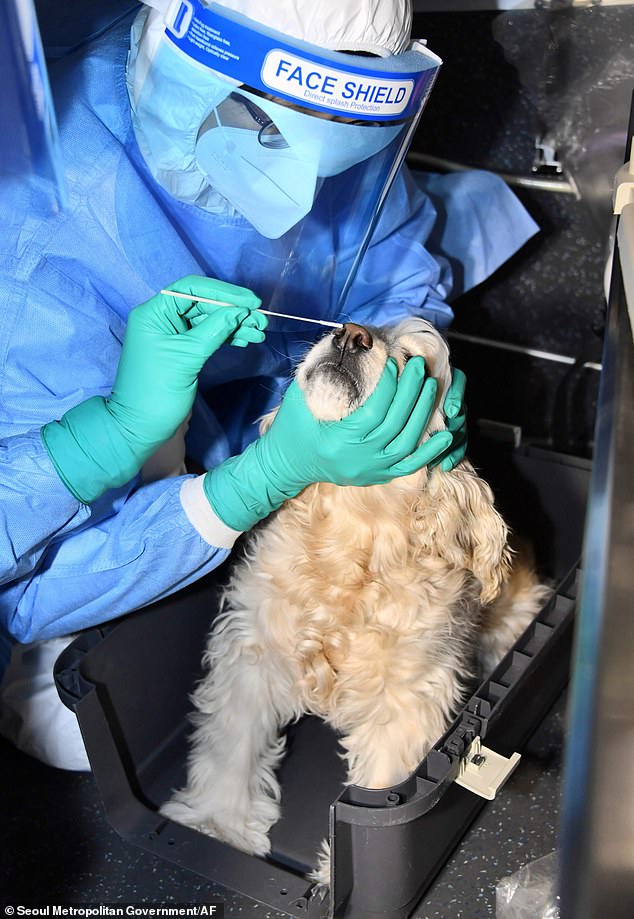 The resident in Seoul reported that the dog showed symptoms of fever and a runny nose after health authorities sent out an epidemiological survey to pet owners.

A veterinarian took samples from her nose and rectum and transferred them to Seoul’s Animal Sanitation Laboratory, the city office said.

The samples have been tested at the laboratory and will be released later on Wednesday.

South Korea reported its first confirmed case of an infected pet in late January after a kitten tested positive for COVID-19.

Health authorities said they assumed the cat was infected by its owners, who were confirmed coronavirus cases, and decided they could not let sleeping dogs and other pets lie. 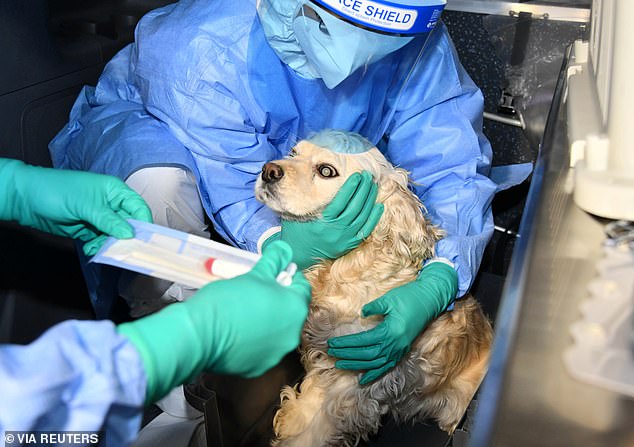 ‘People are worried after the first COVID-19 case in an animal was confirmed in the country. Therefore, we are starting the test to secure the animals’ safety,’ said Song In-jun, an official in Seoul’s Animal Protection Division.

The city government said on Monday there was no evidence the coronavirus is transmitted from animals to humans.

But the officials advised citizens to keep their dogs at least two metres away from other animals when walking them and to follow anti-virus measures. 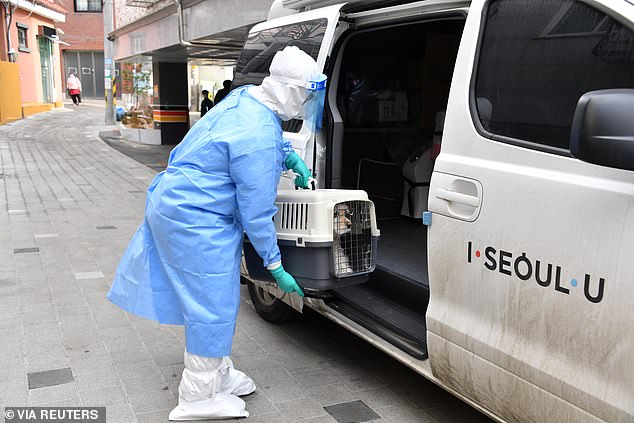 The announcement came after a cat living in a missionary centre in Jinju, South Gyeongsang Province tested positive for coronavirus on January 24.

Cats with Covid have also been reported in Britain, Brazil and Japan, while a dog died in Hong Kong last year after testing positive for the virus.

South Korea is a pet-loving nation with around a third of its 50 million people keeping animals in their homes.

The country has been praised for its response to the coronavirus, having seen just 81,930 cases of the virus and 1,486 related deaths – far lower figures than a number of other countries with similar population densities.

CAN YOU CATCH COVID-19 FROM YOUR PET?

The chance of your dog catching Covid-19 strain is very slim, according to the World Health Organization (WHO).

Professor James Wood, head of veterinary medicine at the University of Cambridge, said: ‘Despite millions of people having had Covid-19, the numbers of pets found to be ill or infected is still tiny.

‘Put simply, our pet dogs and cats can catch Covid-19 from us, when they are living with us, but only do on very rare occasions.’

Scientists say pets don’t appear to get very sick with Covid-19, and various pet organisations and charities say there is no need to be worried.

The first dog in the world to catch coronavirus died after it was declared disease-free and returned home to its owner in Hong Kong.

The owner of the 17-year-old Pomeranian, whose also had Covid-19, did not allow the dog to be autopsied, so the exact cause of death remains unknown.

How do animals get infected?

Animals are likely to catch the virus the same way a human would — when respiratory droplets enter the pets’ nose or mouth.

Professor Wood said: ‘Cats may become infected by the high doses of virus transmitted by their infected owners in some settings.

‘The relative size of a cat versus a human means that there is far less exhaled breath from one cat in a house, compared to the exhaled breath volumes from a human patient.

‘Further, the grooming behaviour of cats means that they are more likely to catch infection from an owner than vice versa.’

When pets have been reported to have the virus, they have signs that indicate a respiratory illness.

Downing Street said the cat in England with the virus had symptoms of a respiratory infection with a nasal discharge and some shortness of breath.

Scientists have shown that cats, ferrets and hamsters are susceptible to SARS-CoV-2. But ducks, chickens and pigs don’t appear to be.

Professor William Weir, of the University of Glasgow’s School of Veterinary Medicine, said ‘the significance of SARS-CoV-2 as a feline or canine pathogen is unknown’.

He added that there have been no reports of cats passing the virus to dogs or vice versa.

Can humans catch Covid-19 from animals?

There is no evidence that a human could catch the coronavirus from an animal in the same way as it would from another human.

Covid-19 is mainly spread through droplets produced when an infected person coughs, sneezes, or speaks.

Professor James Wood, head of department of veterinary medicine, University of Cambridge, added that pets would exhale far less breath — which may have virus droplets inside — than humans.

In any case where a pet has tested positive for the virus, the owner reportedly had it first.

The WHO says: ‘While there has been one instance of a dog being infected in Hong Kong, to date, there is no evidence that a dog, cat or any pet can transmit Covid-19.’

Professor Weir said: ‘At present, there is no evidence that cats, dogs or other domestic animals play any role in the epidemiology of human infections with SARS-CoV-2.’

An official report by the UK’s top vet said household pets may carry the virus on their fur, which risks spreading the disease from person to person.

It said: ‘Close contact such as cuddling, grooming, feeding and allowing animals to share food could all allow the transfer of virus.’

The document, prepared by the UK’s Chief Veterinary Officer, was considered on April 30 at a meeting of the Government’s Scientific Advisory Group for Emergencies (SAGE).

The report warned that the virus could survive on pet fur, meaning ‘there is a plausible pathway that the animal may act as a fomite [infectious object] for at least a few hours and transfer virus to others in the household.’

It added that pet owners who have symptoms to prevent their dog or cat from coming into contact with ‘susceptible humans’.

How many pets have had the infection?

A very small number of pets have been reported to have the coronavirus in other countries in Europe, North America and Asia.

The first dog in the world to catch coronavirus in Hong Kong, a 17-year-old Pomeranian, died on March 16.

It was declared disease-free and returned home to its owner, a 60-year-old woman who was hospitalised with Covid-19 the month prior, after being quarantined at a government facility.

The dog was never autopsied, and so the exact cause of death was not determined.

What precautions should I take when dealing with animals?

If you are sick with Covid-19, it is recommended you restrict contact with your dog and see if other people can look after them.

The Centre for Disease Control and Prevention says: ‘It is still recommended that people sick with Covid-19 limit contact with animals until more information is known about the virus. This can help ensure both you and your animals stay healthy.’

How to you stay safe around your pet: