Home » World News » Confined to an apartment, but at least the dog is walked

It hasn’t been fun for Nicola Clement, confined to her apartment in a Maribyrnong residential block under a 14-day quarantine.

Ms Clement has gone through many emotions in the past week. It’s some consolation that at least her dog Vernon — a “jug” or pug-jack russell cross — gets regular walks. 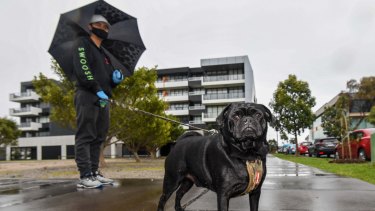 The state government has directed Maribyrnong City Council to organise a professional dog walker to take three canines living in the Ariele Apartments for walks three times a day.

The service is offered at no expense to the owners — with the cost to be covered by the state government — until the quarantine ends on July 28, subject to negative COVID-19 tests.

Dog walker Harry Trinh, who is paid $35 per dog, per day, soon learned that the pooches — Vernon, rottweiler Boston and border collie Lila — could not be walked together.

“The big one, the rottweiler, couldn’t stand anyone near him,” Mr Trinh said. “The girl, Lila, has some type of anxiety, so no other dogs with her, also, and Vernon, he wants to be on his own.” 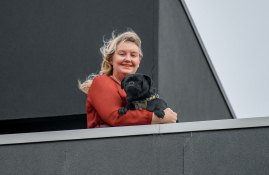 Soldiering on: Nicola Clement with Vernon on her apartment balcony.Credit:Joe Armao

Ms Clement, 42, said it was a comfort having “Vern” with her, after two removalists who had entered the building earlier this month, then four residents tested positive to COVID-19, causing all occupants to be barred from leaving their flats.

Ms Clement said at first Vernon went 24 hours without a walk and had to use plants on the balcony as a toilet, which he had been trained against doing.

She considered asking a friend to mind her pet. Nurses based in the foyer would sporadically walk Vernon before the dog walker arrived last weekend.

Now that Vernon is walked regularly, “it makes me feel so much better”, Ms Clement said. “He is calmer, which makes me calmer as well.” 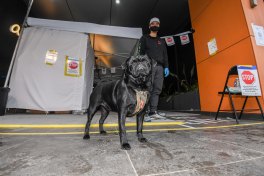 Vernon the dog with walker Harry Trinh outside the locked-down Ariele building in Maribyrnong. Credit:Joe Armao

At each walking time, she shuts her windows and turns off the heater so air doesn’t flow into the hall. She puts on her mask and puts the leash and harness on Vernon.

The dog runs to a government residential support officer who is wearing full personal protective equipment. The worker takes Vernon down the lift to Mr Trinh, who wears gloves.

Ms Clement, who during the pandemic has worked in digital marketing from her native New Zealand and from Western Australia, said being stuck inside her building was “my worst nightmare”.

Last week she felt “overly angry” about trivial issues before realising she was anxious and stressed, so she turned off social media and cut back on the news.

“It helped me calm down and focus a lot better,” she said. “I’m doing much better now that Vern’s better. He’s very affectionate. I sit on the couch, and he’ll half lay on top of me.

“We look after each other, I guess.”

“I think it’s a great idea and it’s essential to meet some of the dogs’ welfare needs,” she said.

Dr Carter said dog owners who were unable to walk pets should provide them with plenty of play options while inside.

“There’s lots of sights, smells and sounds when they go out, and if you’re locked up in a room, a bit like us you get a bit of cabin fever and you need that extra stimulation to be able to relax and settle.”

Make the most of your health, relationships, fitness and nutrition with our Live Well newsletter. Get it in your inbox every Monday.

Hayden Panettiere on relinquishing custody of daughter to Wladimir Klitschko