BioNTech SE's path toward a successful COVID-19 vaccine started more than a quarter of a century ago with a pair of German doctors and an idea: harnessing the immune system to attack not viruses, but cancer cells.

The concept was initially seen as crazy, Chief Medical Officer Ozlem Tureci recalled nearly two years ago. But she and her husband, BioNTech Chief Executive Officer Ugur Sahin, persisted. They persuaded a pair of billionaire twin brothers to invest and built a team of scientists, including other early leaders in the field of messenger RNA vaccines. 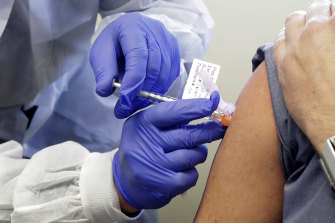 If all goes well, the vaccine would also be the first approved product for BioNTech.Credit:AP

Both of them are children of Turkish immigrant families, and they met while finishing their medical training. Tureci had spent her girlhood following her father, a surgeon, on his rounds at a Catholic hospital staffed by nuns, while Sahin's parents worked at a Ford factory in Cologne. Christoph Huber, head of the hematology-oncology department, recruited them in Mainz, where the trio worked for years on immune-based treatments for cancer.

In 2000, Sahin started exploring whether mRNA could be used for cancer vaccines. But the idea got little traction from investors, so when Sahin, Tureci and Huber started their first company, Ganymed Pharmaceuticals AG, in 2001, they focused on more mainstream approaches. It wasn't until seven years later that Sahin could persuade two of Ganymed's investors, Thomas and Andreas Struengmann, brothers who had made billions in the generic drugs industry, to spin out the mRNA cancer vaccine research into a new company.

Unlike Moderna, which has researched mRNA approaches for a variety of diseases, BioNTech was at first laser-focused on cancer. Huber, now a board member, said earlier this year that he never would have guessed its first product would be a pandemic vaccine.

But in August 2018, BioNTech made what would prove to be an important deal, agreeing to work with Pfizer on a vaccine for seasonal flu. The idea was that the speed of the mRNA approach could help develop better vaccines for a pathogen that changes each season.

Sahin was already thinking about how BioNTech's platform might be used for a pandemic. In October 2018, he said at a conference in Berlin that the ability to deliver a customised product in a matter of weeks might be useful in the event of a global outbreak.

Once BioNTech entered the race for a coronavirus vaccine, Sahin and Tureci knew they needed to get Pfizer involved. On March 2, after having found a slate of 20 vaccine candidates, Sahin called Kathrin Jansen, head of vaccine research and development at Pfizer. The response was positive and immediate, with the US company striking a deal that could be worth as much as $US748 million ($1.02 billion).

The German government has also backed the project with €375 million ($609 million) of funding. The US has a $US2 billion deal to buy 100 million doses, plus an option for 500 million more, although it has not provided research funds. The pricing of the US deal could be a benchmark for the developed world, BioNTech said.

"I'm of course very pleased that it is a German company, a German research and development team, a German biotech enterprise that is among the first that we're negotiating with that can show these first research results," German Health Minister Jens Spahn said at a press conference.

This week's results sent shares of both partners soaring. BioNTech, which was valued at $US3.4 billion after an initial public offering in October 2019, is now worth about $US25 billion.

Drug development is never a sure-fire endeavour, and even if the BioNTech-Pfizer vaccine proves to be as safe and effective as hoped against COVID-19, that doesn't mean the technology will work for the cancer vaccines that Sahin and Tureci originally hoped to create. But the results so far still represent a victory of science, Sahin said.

"It's a really, really fantastic day," he said.