A couple who won a £1million Euromillions jackpot have helped feed hundreds of homeless people struggling in the Covid-19 lockdown.

Bill Mullarkey, 60, and Cath, 59, from Coventry, West Midlands, created a dish inspired by a Caribbean curry from St Lucia for a charity’s outreach team.

The pair helped chef Jim Eaves, who volunteers for Langar Aid, make the meal after purchasing and delivering the ingredients, alongside other snacks and drinks.

The professional chefs, who scooped a jackpot prize on their weekly EuroMillions Millionaire Maker in 2017, came up with the idea after seeing volunteers deliver 1,000 Domino’s pizzas to stranded lorry drivers in Kent last month. 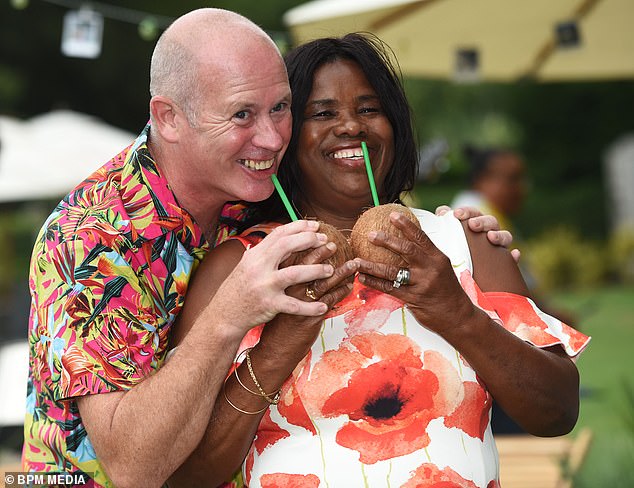 Bill Mullarkey, 60, and his wife Cath (both pictured above), 59, from Coventry, West Midlands, created a dish inspired by a Caribbean curry from St Lucia for a charity’s outreach team 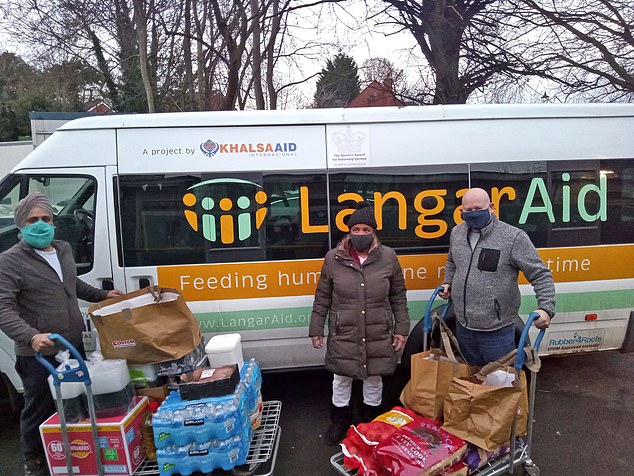 The couple, from Coventry, West Midlands, pictured delivering the ingredients, snacks and drinks with the help of volunteer Inderjit Singh

Bill, who is also known as William, said: ‘I saw the Langar Aid guys on the TV dishing out meals to stranded lorry drivers on the M20 over Christmas. I was inspired and wanted to help them look after homeless people in Coventry.

‘Ordinarily Cath and I would have gone into the kitchens and cooked everything but working with Stuart was the best way of still making a difference while minimising contact.

‘As Cath is from St Lucia we went for a Caribbean curry. A vegetable and coconut curry with a side order of rice and peas plus drinks.

‘We also handed over lots of chocolate bars as treats.’

Cath added: ‘Jim was brilliant. We chatted through meal ideas, the ingredients because everything is vegetarian, even the cutlery.

‘He and the other volunteers give up their spare time and stand out in all weathers; it’s so cold at the moment, a lot colder than St Lucia and I am in awe of the work they do.

‘That’s why Bill and I wanted to also give something to the volunteers as well to say thank you.’

Langar Aid is a project set up by Khalsa Aid which feeds the homeless, vulnerable and those living in poverty in the UK. 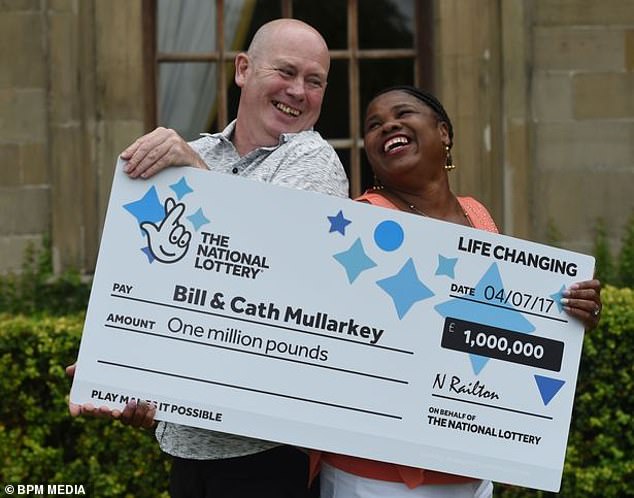 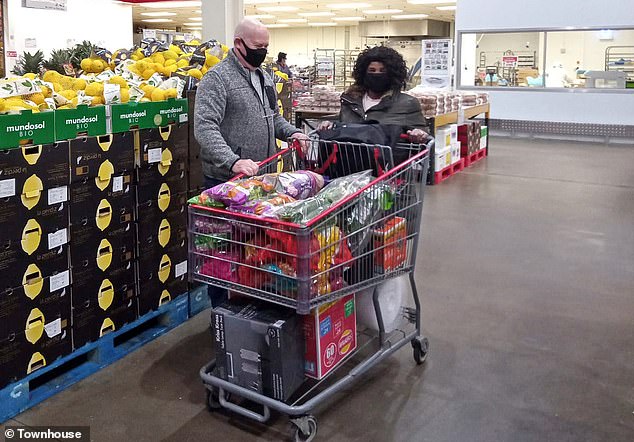 Bill and Cath seen buying the ingredients for the meal in Coventry. They were inspired after seeing volunteers deliver 1,000 Domino’s pizzas to stranded lorry drivers in Kent last month

The charity’s team states on its website: ‘We work collaboratively with organisations, Governments, and NGO’s to effectively co-ordinate and supply vital nutrition in times of need.’

Avtar Kaur, Project Manager at Langar Aid said: ‘Thank you Bill and Cath. It was great to see so many people enjoy their Caribbean curry on Saturday night.

‘It was the first time we’ve had a Caribbean dish and it went down very well with lots of positive comments. The service members were very grateful, and we hope to see Bill and Cath soon.’

The couple also designed and created a three-course Carribean-themed Christmas meal for 100 pensioners at the Jubilee Crescent Community Centre two years ago.

Bill and Cath found out they won £1million after receiving an email from Camelot, but Bill almost deleted it, thinking it was spam, until his granddaughter urged him to click it. 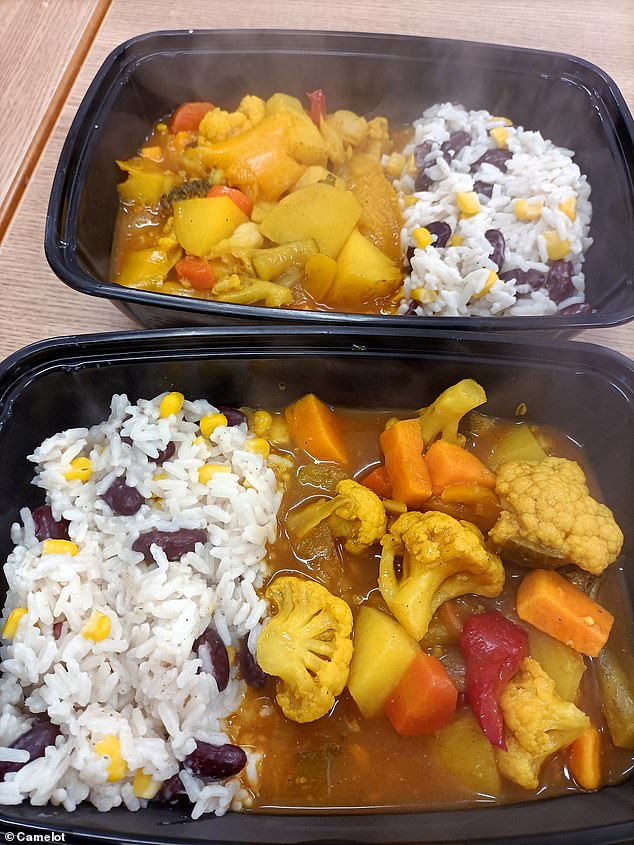 The dish designed by the couple, which was based on a Caribbean curry from Cath’s native St Lucia, and served up as meals on Saturday 23 January 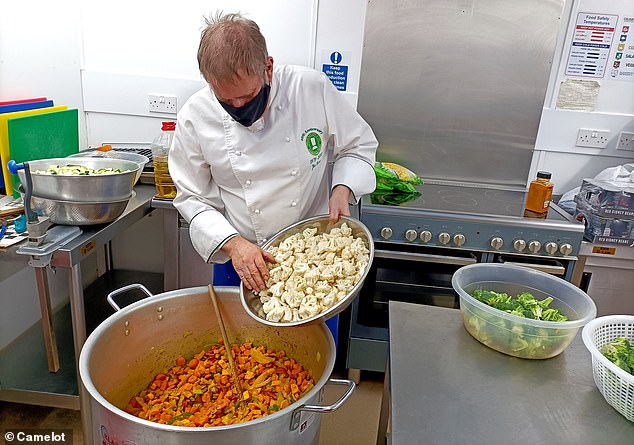 Chef Jim Eaves pictured cooking at Langar Aid’s HQ. Cath said: ‘Jim was brilliant. We chatted through meal ideas, the ingredients because everything is vegetarian, even the cutlery’

Bill first noticed he had an email while in St Lucia on June 27 but couldn’t check it until he was back in the UK 16 days later, on July 12.

He said at first they thought they had won £10,000 or £100,000 but ended up ‘screaming and dancing’ around the living room when they figured out it was £1million.

The couple previously said they planned to spend their money on a second home in Cath’s native St Lucia in the Caribbean.

The pair’s first priority was to help Messiah – their nephew who was left paralysed from the waist down in a bike accident near his home in St Lucia – paying for changes to his home.

Bill said at the time: ‘I got an e-mail when we were in St Lucia from the National Lottery and I just had a look on our return last Wednesday.

‘I spoke to a young lady on the phone and then waited for a few minutes, which felt like forever, and then she said we had won £1 million.

‘At that moment there was such excitement in the house and lots of screaming. We celebrated with a nice cup of tea and I didn’t sleep all night, it just wouldn’t sink in.’