Abusive customers have lashed out at retail workers on the first day of new state government rules that make it mandatory for shoppers to sign into shops and supermarkets using QR codes.

The retail workers union has already raised concerns with the state government after receiving reports of staff being verbally abused by customers just hours after the changes came into effect. 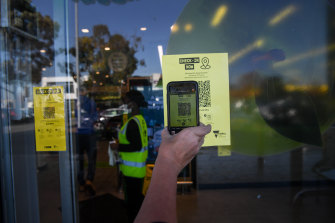 It has become mandatory for Victorian shoppers to sign into shops and supermarkets with QR codes.Credit:Justin McManus

Gerard Dwyer, national secretary of the Shop, Distributive and Allied Employees’ Association, said he was aware of “an upsurge in incidents of customer abuse”, after the rule change.

In a bid to boost contact tracing during Victoria’s fourth lockdown, the government announced that from Thursday customers would have to sign into all retail settings using the Service Victoria app, regardless of the length of their visit.

Australian Retailers Association chief executive Paul Zahra said while he respected the mandatory check ins, he was concerned about the safety and wellbeing of supermarket staff, “many of whom are young and in their first job”.

Moves such as a return to in-store mask wearing had “already increased customer aggression and customer abuse significantly,” Mr Zahra said. “And the reality is that retail staff on the frontlines are the ones who have to deal with this.”

He called on the government to educate the public on the importance of complying with QR code rules, and said staff needed strong and consistent support from law enforcement to manage customer abuse.

“Frontline retail staff have been under significant pressure throughout the pandemic with a huge burden of new requirements in addition to their normal job,” he said.

“It’s unfair and unreasonable to expect that these frontline workers also take on the stress of aggressive customers who don’t want to comply.”

Mr Zahra said while retailers would be doing everything they could to encourage customers to comply with QR codes, enforcement was a matter for police and law enforcement officers.

“Retailers and frontline workers are not in a position to undertake health enforcement,” he said. “Any requests in this area are inappropriate and in fact an occupational health and safety concern.”

Mr Dwyer agreed and said the union was engaging with employers to ensure shop workers’ were not put in any danger. “The union understands the need for this requirement during the current Victorian lockdown to ensure the safety of the community at large,” he said.

“However, it is no excuse for shoppers to take out their misplaced frustrations on retail workers.”

A recent SDA survey of 2300 retail workers found that one quarter were verbally abused every week. One in five respondents reported being coughed or spat on during the pandemic.

Until now, QR check-ins have only been recommended for Victorian supermarkets and retail. They have only been a requirement in South Australia and Western Australia, where customers must check in with QR codes when they enter a shop.

In Victoria, Coles supermarket has begun deploying “greeters” at metro stores to help customers use the Service Victoria app and respond to any questions.

Those who are unable to use the app can sign in using an alternative system at the service desk or front of store.

A Coles spokeswoman said customers would be presented with QR codes at the entrance, sanitiser stations and check outs.

A Woolworths spokeswoman said its QR codes would also be distributed throughout the store to “help avoid social distancing risks that would arise if we had bottlenecks at store entry”.

“We ask customers to continue to treat our teams with the respect and courtesy they deserve,” she added.

Last week, Health Minister Martin Foley defended the government’s decision not to make QR code check-ins mandatory at supermarkets, saying shoppers should use “common sense” and check into venues where they spent 15 minutes or longer.

The change in stance follows the state government raising concerns this week about “fleeting” coronavirus transmission in a South Melbourne Telstra shop, and a Port Melbourne cafe.

Stay across the most crucial developments related to the pandemic with the Coronavirus Update. Sign up to receive the weekly newsletter.