The wedding took place in the district of Osmaniye in the southern Turkish province of Adana.

Video shows the long kebab being wrapped around a metal pride before being held up horizontally by dozens of tables.

Crowds of people can be seen supervising the meaty meal before lifting it up simultaneously and placing it over a grill.

According to reports, the kebab was made from lamb and mutton rib meat which was minced and prepared into a long single kebab.

It was grilled in front of the attending guests and then cut by the newlywed couple and served up.

Yasar said he made the kebab after wanting to do something special for his son’s wedding.

The father-of-the-groom told local media: “Our family business is kebab meat and I wanted to make my boy’s big day even more special so we made a record long kebab. 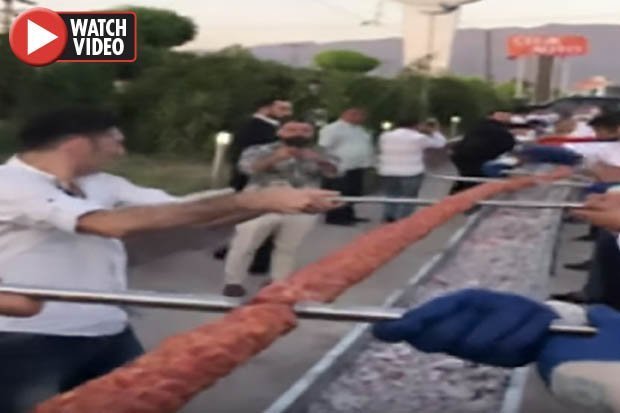 “I made a 60-metre long grill as well and we cooked the kebab at once.

“I am very pleased about my son’s wedding and the kebab we served.”

But according to Guinness World Records, the longest ever kebab was made by ArcelorMittal Newcastle Works for the South African company’s annual Community Day in 2008 and measured 2,047.47 metres (1.27 miles).

It comes after a woman who was dubbed “fatty” revealed her secret to shedding 13stone.