Home » World News » Dancing keen? You can have the time of your life, again, from midnight

Melbourne’s nightclubs and punters are gearing up for a weekend of revelry ahead of the lifting of density and capacity limits as restrictions further ease across Victoria at midnight on Thursday.

Nightclubs will no longer have to enforce the seated service rule, which required patrons to remain seated whilst eating and drinking. Punters will also be able to dance mask-free. 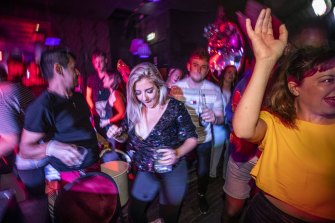 Club-goers, like these at The NightCat in Fitzroy, celebrated in December last year as dancefloors reopened after Melbourne’s long second lockdown.Credit:Meredith O’Shea

On Thursday afternoon, Prahran nightclub OneSixOne was preparing for its 1970s style light-up dance floor to fill up for the first time since before the pandemic started.

Alyce Merrilees is planning to be on the OneSixOne dance floor as the clock strikes midnight. “I can’t wait another second,” she said.

The 35-year-old said she was ecstatic when she heard that nightclubs would open on Thursday night.

“I was posting on my Instagram straight away ‘let’s dance’, posting pictures of us dancing,” she said.“It’s been a long time coming.”

Ms Merrliees said she had made the most of going out without dancing, but that it wasn’t the same. “You miss that real connection of dancing and looking each other in the eye and, like, hugging and meeting new people and just being free,” she said. “There’s going to be so many smiles on so many faces.”

COVID-19 restrictions have been tough on OneSixOne, a fixture on the Melbourne club circuit for more than 20 years.

The club, which is on High Street, just off Chapel Street, has been shut for most of the time since Melbourne first went into lockdown and in the narrow windows it has been allowed to open, restrictions such as dancing bans have been difficult for staff to enforce.

“It was like herding cats,” Mr Oudendyk said. “We were one of the venues that was doing the right thing, but the rules became very difficult, especially later in the evening.”

However, at the stroke of midnight the team at OneSixOne can start to put the dark times behind them.

“Without restrictions, people can walk up to the bar and have a drink, rather than stay seated,” Mr Oudendyk said. “It’s great. It’s like almost going back to normal, really.” 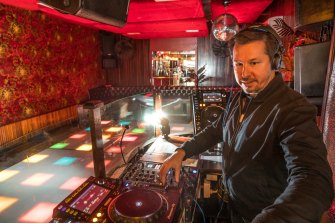 DJ Zok playing to an empty dancefloor at nightclub OneSixOne for a Facebook live streamed event in April, 2020.Credit:Jason South

“This weekend on Chapel Street is going to be huge,” she said.

“Everyone in the next couple of days will be hitting the dance floor because I think we all need a dance and to shake out what the last 18 months has done.”

Ms Maus said the easing of restrictions ahead on the weekend was a huge relief for traders.

“Businesses are excited,” she said. “We want all our businesses to be able to get themselves out of the COVID debt that’s been snowballing.”

Ms Maus said the area had been experiencing the highest foot traffic it had seen in a decade since restrictions began to ease at the end of last month, with many punters choosing it as their preferred location over the CBD.

“The street is like absolutely chock-a-block at night,” she said. “People are just letting off steam and having a ball.”

Nick Kennedy, from Code nightclub in the CBD, said it couldn’t wait to welcome back punters onto the dance floor.

“We’re super excited. It’s been around a year and a half of hardships, but things are finally looking up,” he said.

“You can’t really run a nightclub with tables and chairs, it just doesn’t work.

“This is really a nightclub setting again. The vibe is completely different, the energy levels are higher.”