Odense, Denmark: A Danish inventor convicted of killing a journalist aboard his homemade submarine in Copenhagen in 2017 briefly escaped from prison on Tuesday, according to the Danish state broadcaster.

The inventor, Peter Madsen, reportedly fled the Herstedvester Prison near Copenhagen after using a staff member as a human shield but was arrested a short time later in Albertslund, near the facility on the western outskirts of the city. Photos and videos posted by Ekstra Bladet, a local news outlet, appeared to show Madsen seated on the side of the road surrounded by armed police officers with the area cordoned off. Media reports said he may have had a "belt-like" object around his waist. 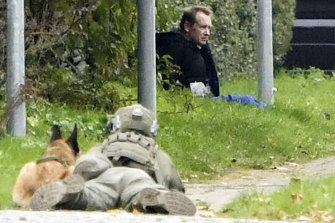 A police office watches Peter Madsen as he sits on the side of a road after being apprehended.Credit:AP

The police said in a statement posted to Twitter that they had responded to an incident in Albertslund in which "a man has been arrested after attempted escape" but did not name Madsen. A short time later, police said that the person had been removed from the scene. The state broadcaster, DR, said police had confirmed the escaped prisoner was Madsen.

The police also said that investigators were on site and that the area had been cordoned off.

Madsen was able to escape by taking a female prison psychologist hostage, the chairman of the prison workers' union, Bo Yde Sorensen, told Ekstra Bladet, adding that he had been brandishing what appeared to be a gun.

"The weapon was so lifelike that prison guards at the gate didn't take any chances in relation to the hostage," Sorensen told the newspaper.

Madsen's actions were deemed a danger to the prison worker's life, prompting a decision to let him out of the gate, he said.

"It's a decision I support," he said. "We don't want to risk anybody getting killed – we have to find people afterward." 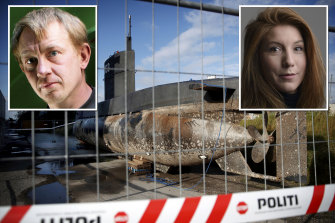 Guards followed Madsen as he fled but stepped back when he threatened them, the news outlet reported, before eventually taking him into custody.

Kirsten Schlichting, 78, who lives and works near the prison, spoke with TV 2, a national news network, and described a heavy police presence as officers tried to apprehend Madsen.

"The only thing I'm worried about is the school which is also close by, but I don't know if there are students there," Schlichting said. "But I'm not afraid. There's lots of police watching out."

Madsen was found guilty of the premeditated killing – equivalent to a murder conviction – of journalist Kim Wall in 2018 and sentenced to life in prison. A life sentence is rare in Denmark, even in murder cases, but Wall's grisly death horrified the nation, and the brutality of the crime made Madsen's trial one of the most closely watched in Scandinavian history.

Wall, 30, disappeared after meeting Madsen for an interview aboard his homemade submarine in August 2017. Her body was later discovered dismembered, and Madsen was soon arrested and charged with her killing.

Madsen initially offered a series of shifting explanations about Wall's whereabouts, before admitting to dismembering her body and tossing body parts overboard. But he denied killing her.

Wall, a freelance journalist who had written for international outlets including The New York Times, graduated from the London School of Economics and received two master's degrees from Columbia University. She reported from Uganda, Sri Lanka and Cuba, and died only kilometres from Trelleborg, Sweden, where she grew up.

"Kim wanted to give a voice to people who didn't have one," Joachim Wall, her father, said in a recent interview with The New York Times. "She was always looking for the story behind the story."

A television drama based on the police investigation of her killing premiered in Denmark last month.