Washington: Despite the scenes of pandemonium that marred the beginning of the US-led evacuation effort from Afghanistan, Joe Biden could take comfort in one fact.

No Americans – either civilian or military – had died during the withdrawal effort, which was ramping up impressively in recent days.

An article in Politico this week summed up the increasingly buoyant mood inside the Biden administration. 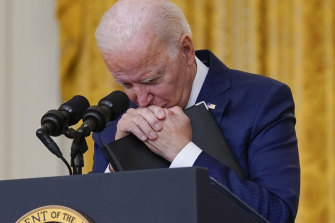 US President Joe Biden pauses as he listens to a question about the bombings at the Kabul airport that killed more than a dozen American soldiers.Credit:AP

“In the span of a week, the White House went from struggling to explain a rapidly deteriorating situation in Afghanistan to beating its chest,” the report stated.

Now, after the deadliest day for the US military in Afghanistan since 2011, no-one in the White House is beating their chest.

The evacuation effort will still see more than 100,000 people airlifted out of Afghanistan – an impressive achievement in just a few weeks. 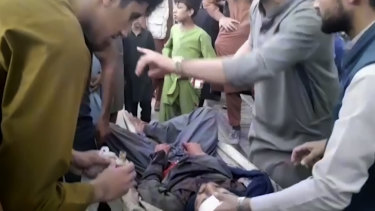 People try to help a wounded man near the site of one of the bombings outside Kabul airport.Credit:AP

But it will come at a tragic cost: the lives of at least 13 American troops and an estimated 60 Afghan civilians.

The deaths of so many American soldiers was a nightmare come true for Biden, whose primary rationale for ending the war in Afghanistan was to keep American troops safe. And it was a startling moment for the American public, which is no longer accustomed to seeing their troops die in large numbers.

Since the Trump administration struck a peace deal with the Taliban at the start of last year, the number of US casualties in Afghanistan had reduced to a trickle. No US troops had died in the country since Biden’s inauguration in January, making the death toll on Friday even more shocking.

The suicide bombings themselves weren’t surprising. Unlike the rapid collapse of the Afghan army, US intelligence agencies saw them coming. A day before the attacks, the US embassy in Kabul advised US citizens waiting outside the airport to “leave immediately,” noting “security threats outside the gates.” 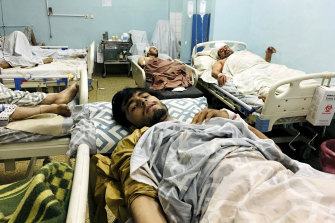 Wounded Afghans wait in hospital after two deadly explosions outside the airport in Kabul, Afghanistan.Credit:AP

And on Wednesday (AEST) Biden said: “Each day of operations brings added risk to our troops … The sooner we finish, the better.”

The fatal attacks that followed have had two, seemingly contradictory, consequences. They justify Biden’s determination to take US troops out of Afghanistan soon as possible. And they reinforce existing perceptions of a botched withdrawal. A YouGov poll released earlier in the day showed that 68 per cent of Americans already believed the evacuation had been handled poorly.

Even worse may be to come. US military leaders have warned that ISIS-K, which claimed responsibility for the attacks, could launch rocket attacks or car bombs near the airport in coming days.

The threat of such attacks will severely curtail the US-led effort to get as many people out of Afghanistan by next Tuesday.

It was already difficult to make it through the desperate crowds and Taliban checkpoints into the airport; now security will need to be tightened even further to keep the area inside the airport gates secure. Thousands of Afghans with legitimate claims to asylum are likely to be left behind, and hundreds of Americans may be left stranded.

For purely self-interested reasons, the Taliban has been working to help Americans and other foreigners leave Afghanistan safely. They want foreign troops out of the country as soon as possible and are eager to build a sense of legitimacy on the international stage.

ISIS-K has no such agenda. They want to humiliate America on its way out the door and to destabilise the Taliban, whom they regard as insufficiently hardline. (Given the fundamentalist nature of the Taliban, this says a lot about ISIS-K’s radicalism.)

Just a fortnight ago, the US and its allies considered the prospect of the Taliban taking control of Afghanistan a disaster. Now an even more frightening scenario has emerged: the Taliban is not in control. And neither is anyone else.

Speaking after the attacks, Biden told the American people what he knew they wanted to hear: the US would hunt down those responsible and make them pay. But his words rang hollow. America’s priority in Afghanistan is not retribution but rushing to the exit door.

At best, the next four days until the withdrawal cut-off will be anxiety-inducing. At worst, they will be even more tragic and deadly than what we’ve already seen.