Liberals leader Michael O’Brien says stricter border controls could have prevented Victoria’s fifth lockdown and has called for quicker closures, in a departure from the Opposition’s frequent warnings against disproportionate public health measures.

The Liberal leader’s intervention came as Victoria recorded 22 coronavirus cases on Wednesday – the highest daily total since September last year but all have been linked to current outbreaks. 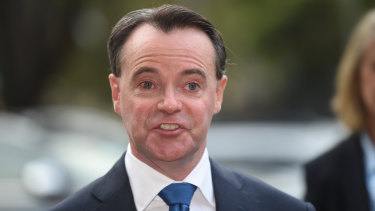 Michael O’Brien wants Victoria’s borders closed to other states sooner if there is a covid outbreak.Credit:Justin McManus

Chief Health Officer Brett Sutton said, however, he was encouraged that 16 of those cases were isolated for their entire infectious period and predicted the number of community infections had peaked.

Mr O’Brien told The Age that if the Sydney removalists who sparked one of the state’s two Delta outbreaks were forced to undergo a rapid COVID test at the border, “we wouldn’t be where we are today” and criticised the speed at which the government tightened rules to prevent COVID-positive people travelling to Victoria.

The removalists worked in Melbourne on July 8, eight days before rules for these types of workers were changed. The family that sparked a second cluster in the current outbreak returned from NSW on July 4, 16 days before the government blocked entry for everyone without special exemptions. Metropolitan Sydney was designated a red zone on June 25 after about 55 cases were recorded in the state in the preceding week.

South Australia reported another six cases on Wednesday, bringing its outbreak to 12. The state will become a red zone to Victorians from 11.59pm on Wednesday.

“I thought they were quite slow in terms of closing the border with NSW,” Mr O’Brien said. “We knew we were dealing with Delta. Allowing the border to stay open with NSW as long as it did exposed Victoria to greater risk.

The Victorian government spent days warning of border changes in order to give Victorians time to return home and allow border communities and businesses time to adjust to the impending changes.

Victoria’s Delta outbreak has grown to 107 cases in nine days.

Of Wednesday’s 22 new cases, five were linked to Trinity Grammar, five to Miss Frankie restaurant in Cremorne, three to the Young & Jackson’s hotel, three to St Patrick’s Primary School in Murrumbeena, two to AAMI Park, two to Bacchus Marsh Grammar, one to the West Gate Tunnel and one to the City of Hume outbreak, where a mystery case from Roxburgh Park has also now been linked.

A man in his 50s from Barwon Heads is being treated for COVID-19 in intensive care, while four others are in hospital.

Professor Sutton said he believed community transmission had peaked but expected more household cases to emerge. He also predicted more people would enter intensive care, given the severity of the delta variant.

Asked about the outbreak’s probable trajectory had Victoria not locked down last week, Professor Sutton said he believed there would be up to 300 cases by now.

“If we had locked down today, there would have been thousands of cases in the next few weeks,” he said. “We’d be in a world of hurt.”

The state government on Wednesday pumped another $282 million into its business support package as Victoria prepared for the second week of its latest COVID-19 lockdown.

The Opposition criticised the Andrews government for closing the NSW border too quickly on New Year’s Eve and has commonly warned against drastic, knee-jerk public health responses.

But Mr O’Brien said on Wednesday that he “would do pretty much anything to avoid statewide lockdowns” to prevent damage to mental health and people’s finances.

“This is our fifth statewide lockdown and we just can’t keep living like this … yo-yo-ing between lockdowns … and constantly looking over our shoulder.”

Mr O’Brien said he accepted lockdowns could be required until mass vaccination was reached but said state governments needed to embrace new ideas and policy solutions that could guard against them.

These could include quicker border closures when cases emerged interstate, the use of rapid tests at the border or more access to interstate travel for those who were vaccinated.

Rapid tests – which produce results in 15 minutes but are slightly less accurate – could provide greater freedom of movement within the state, Mr O’Brien said, including allowing people to attend hospitals with their loved ones, which is allowed only for children and end-of-life patients under current rules.

Professor Sutton said on Tuesday that health authorities were examining whether rapid testing could be used to assist the operation of major events, as they were used at Wimbledon this month. He described the tests as imperfect but a potential “game-changer”.

NSW recorded 110 new locally acquired cases on Wednesday, 43 of which were in the community while infectious. More than 100 people are in hospital and 23 are in intensive care.

In other Victorian news, authorities caught a new crew of removalists attempting to travel to Mildura. They were fined and sent back to NSW.

More than 28,000 Victorians are now deemed primary and secondary close contacts and a record of almost 60,000 people were tested for the virus in cold and wet weather on Tuesday. 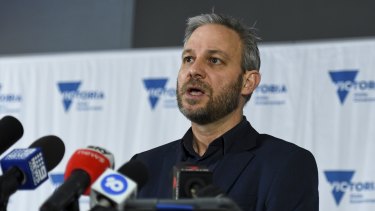 At the Mildura Base Public Hospital, at least 55 staff are isolating after coming into contact with a man who tested positive for coronavirus.

Geelong-based Barwon Health has about 50 staff in isolation as close contacts or visiting exposure sites in Melbourne or the local region.

Authorities are urging residents of Phillip Island and surrounding Bass Coast to come forward for testing after COVID-19 fragments were found in wastewater, raising fears of undetected cases.