Home » World News » ‘Don’t have to become like them’: Singapore advises Australia to work with China

Singapore: Prime Minister Scott Morrison has been advised to try and engage with a rising and assertive China by his Singapore counterpart Lee Hsien Loong before Mr Morrison’s first face-to-face meeting with US President Joe Biden in Britain.

Morrison visited Singapore’s presidential palace, the Istana, on Thursday night in a brief stopover on the island nation en route to the G7-plus meetings in Cornwall. 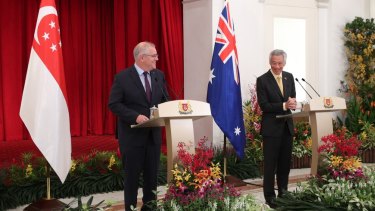 Scott Morrison meets his Singapore counterpart Lee Hsien Loong at a stopover on the way to the G7 in Britain.Credit:Twitter/leehsienloong

The two leaders said they would begin the development of the infrastructure for a travel bubble between the countries including a mutually recognisable digital vaccine certificate.

There was no timetable set for a corridor to open and Morrison flagged that quarantine-free travel from Singapore was “some way away”. But he agreed to a request by Lee for the return of Singaporean students to Australia to be a priority, saying they would have first access to any bubble between the nations.

Morrison and Lee also announced plans for a fin-tech bridge between Australia and Singapore under their digital economy agreement as well as a partnership on developing low-emissions technology focused on hydrogen.

There was an offer as well from the Singapore leader for his country to be a distribution hub for Australian-made vaccines headed for south-east Asia and even to assist with manufacturing the doses and vials.

Australia’s battered relationship with China, however, always going to be on the agenda as Morrison passed through the Indo-Pacific on the way to the UK, where he will meet Biden on the sidelines of the G7 summit.

Lee last month urged China and the US to find common ground, warning “everything is to be lost” in a conflict between the superpowers, and when asked on on Thursday night how Australia should handle its relationship with Beijing, he had a similar recommendation.

“China is one of the biggest ones policy questions for every major power in the world,” Lee told reporters after the meeting. “You need to work with the country. It is going to be there, it is going to be a substantial presence.

“You have to be able to work on that basis, that this is a big world in which there are different countries, and work with others who are not completely like minded but with whom you have many issues, where your interests do align.

“There will be rough spots … and you have to deal with that. But deal with them as issues in a partnership which you want to keep going and not issues, which add up to an adversary which you are trying to suppress. That is speaking in very general terms, but I think that’s from Singapore’s point of view how you have the best chance of developing a constructive relationship and avoiding very bad outcomes.”

A travel channel between Australia and Singapore, meanwhile, is still not on the immediate horizon despite the leaders discussing the need to get the systems in place for one.

Singapore, which has fully vaccinated 1.9 million of its 5.5 million population, already permits Australians, although not Victorians at present, to enter the country without quarantining, only making them isolate for several hours while they wait for their COVID-19 test result. It will have to wait, though, for Australia to return the favour.

“Singapore is the first country outside of New Zealand that Australia wishes to engage in travel with and we want to get it right,” Morrison said.

“Neither of us have identified a benchmark rate on vaccination when it comes to the decision that would be taken around a travel bubble. But this is something that I think will continually be informed by the medical evidence as time goes on.”

Lee opened his public comments by talking about the prospect of travel with Australia, highlighting the need to resume “people to people flows to maintain our close and excellent relationship”.

Morrison and Lee also signed a memorandum of undersanding to facilitate the exchange of information between Australia and Singapore’s health authorities.