Feted by Queen Elizabeth on the first day of his state visit to Britain, Trump was effusive about the “special relationship” between the two nations, dispelling concerns he might repeat criticism of Britain and outgoing Prime Minister Theresa May.

“It’s the greatest alliance the world has ever known,” Trump told reporters at a news conference beside May at Britain’s Foreign Office.

Prior to his trip, the collapse of May’s premiership over her failure to secure Britain’s exit from the European Union had raised concerns that Trump could publicly humiliate her.

Instead, Trump called May a “tremendous professional”, steered clear of rhetoric that could embarrass her and let pass contentious topics such as Huawei and Iran while making light of sensitive issues such as her possible succession.

Trump mentioned Boris Johnson, who has said the United Kingdom should leave the EU on Oct. 31, deal or no deal, and Jeremy Hunt, Britain’s foreign minister who has warned against leaving without a deal.

“I know Boris, I like him, I’ve liked him for a long time. I think he would do a very good job,” Trump told reporters at a news conference beside May at Britain’s Foreign Office.

A WAY OVER HUAWEI

A key area of discord between the allies has been Britain’s preliminary decision to allow Huawei a restricted role in building parts of its 5G network.

The Trump administration has told allies not to use Huawei’s 5G technology and equipment because of fears it could allow China to spy on sensitive communications and data and warned it could impact on intelligence-sharing.

But, after an hour long meeting with May, Trump said any issues could be resolved. 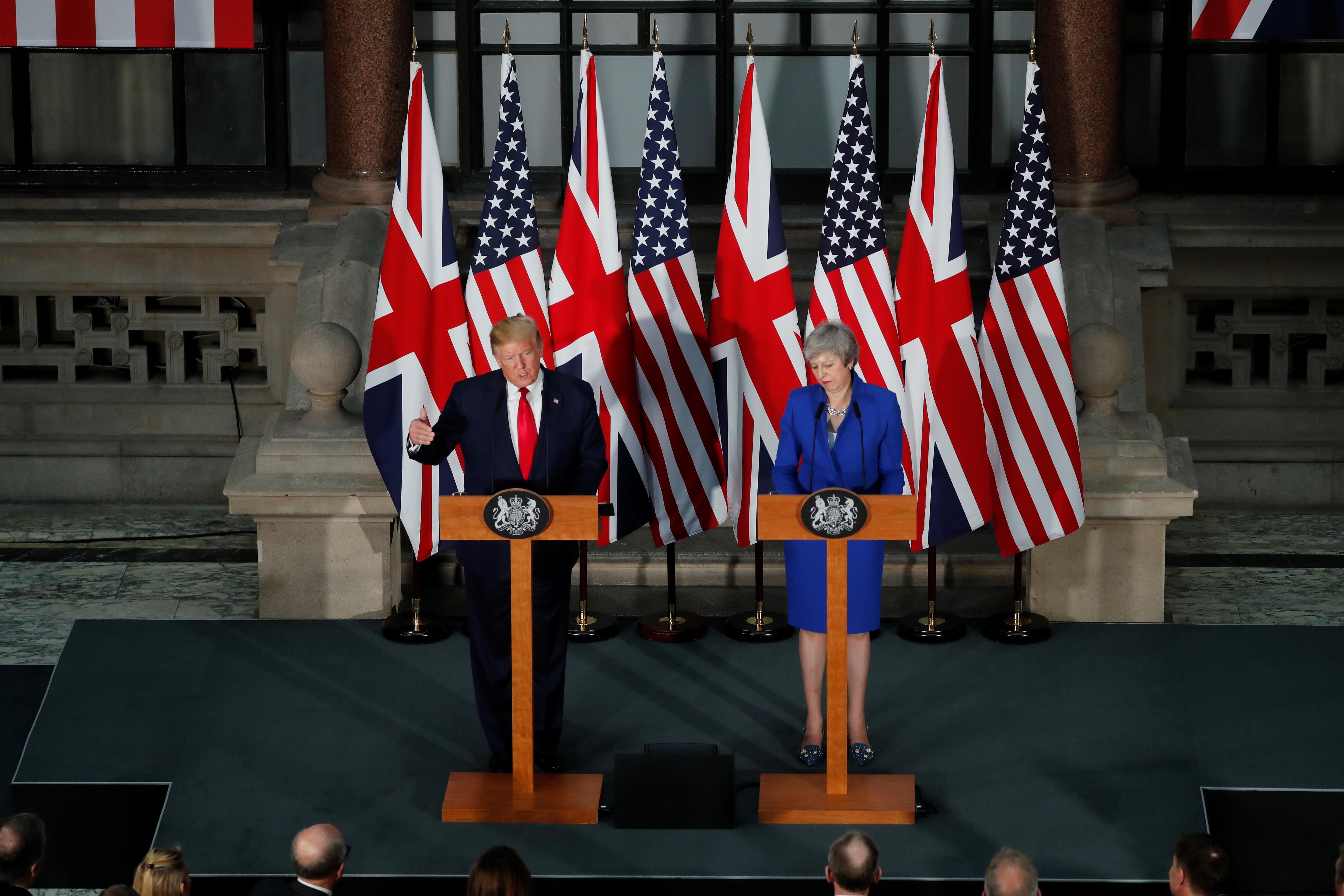 “We have an incredible intelligence relationship and will be able to work out any differences,” Trump said. “We did discuss it, I see absolutely no limitations, we have never had limitations, this is a truly great ally and partner and we will have no problem with that.”

Iran was barely mentioned, while Trump said Britain’s EU divorce would happen and pave the way for a large future trade deal.

“This is a great, great country and it wants its own identity, it wants to have its own borders, it wants to run its own affairs,” he said.

“As the UK makes preparations to exit the European Union, the United States is committed to a phenomenal trade deal between the US and the UK. There is tremendous potential in that trade deal – I say probably two and even three times of what we are doing right now.”

On a trip to Britain last year, Trump shocked the British political establishment by hammering May over Brexit and praising rivals, but on Tuesday the had only warm words for the prime minister.

“I think she has done a very good job,” he said. However, he said he had refused to meet opposition Labour Party leader Jeremy Corbyn, a veteran socialist who spoke at a protest against Trump which attracted several thousand demonstrators to central London on Tuesday. 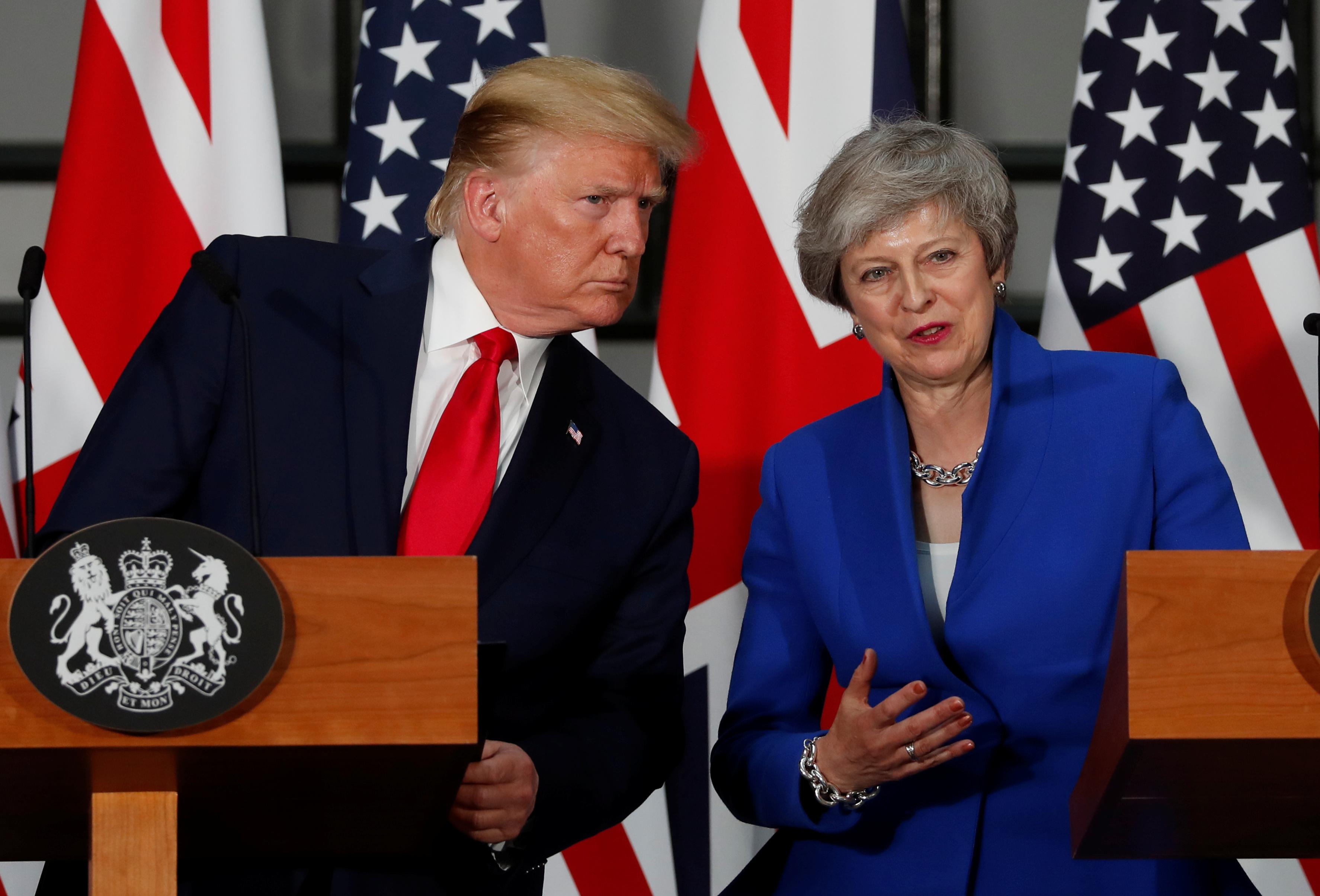 “I heard that there were protests,” Trump told reporters. “I said: ‘Where are the protests? I don’t see any protests’. I did see a small protest today when I came, very small, so a lot of it is fake news.”

May, who steps down as leader of the ruling Conservative Party on Friday, praised the “precious and profound” alliance between the allies and said friends could also be open when they disagreed.

“I have always talked openly with you, Donald, where we have taken a different approach – and you have done the same with me,” she said.

“I have always believed that cooperation and compromise are the basis of strong alliances and nowhere is this more true than in the special relationship.”