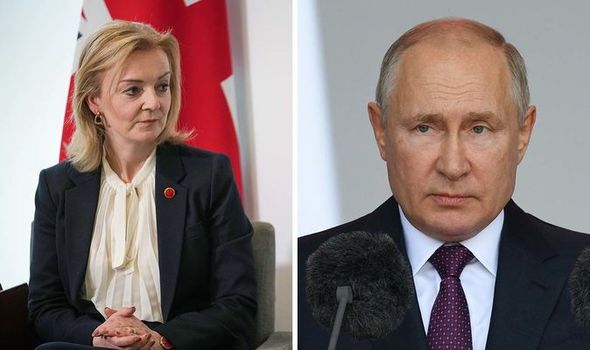 Ms Truss condemned the Kremlin’s “aggressive and unprovoked stance” towards their neighbours as Western ministers met today. NATO allies and Russia will hold crisis talks on Wednesday in a bid to avoid war in eastern Europe. American and Russian officials are also meeting in Geneva on Monday.

Around 100,000 Russian troops, tanks, artillery and electronic warfare equipment have been moved to the border with Ukraine.

Jens Stoltenberg, Secretary General of NATO, yesterday warned the “risk of conflict is real”, adding that the alliance must be prepared in case talks fail.

Mr Stoltenberg declared NATO troops are ready and “we have the plans to be able to protect and defend all allies”.

He said: “The whole idea that Ukraine is a threat to Russia is to put the whole thing upside down.

“The challenge, when you see this gradual military build up, combined with the threatening rhetoric that ‘if you don’t do exactly what we say and meet our demands’ which they know are not acceptable, violating core principles for European security, combined with the track record of Russia of having used force against neighbours before, Georgia and Ukraine, the capabilities, the rhetoric, the track record, that sends a message that there is a real risk for a new armed conflict in Europe.

“That is exactly why it is important to engage in dialogue. We will listen to Russian concerns and we will discuss different issues.

“We need to be prepared for the talks breaking down and that diplomacy will fail. We are sending a message to Russia that if they decide to use military force against a neighbour, there will be severe consequences, economic sanctions, political sanctions.

Amid fears Vladimir Putin is trying to seize control of Kiev, many diplomats fear the Kremlin is simply looking for reasons to walk away from the talks and justify their hostility towards Ukraine.

They point towards the document published by the Russians before Christmas listing Moscow’s demands – many of which NATO will never accept ‑ with the looming threat of war.

But it is understood NATO countries want to engage in talks with Russia to avoid giving Moscow the chance to claim the West is not prepared to listen to the Kremlin’s “concerns”.

Diplomats fear Russian troops have left equipment from previous military exercises in the west of the country, creating a permanent threat to Ukraine.

It is understood many want Russia to respect many of the international agreements in place to prevent conflict.

Foreign Secretary Liz Truss said: “Russia’s military build-up on the border of Ukraine and in illegally-annexed Crimea is unacceptable. There is no justification for its aggressive and unprovoked stance towards Ukraine.

“We stand with our NATO allies in urging Russia to end its malign activity and adhere to international agreements it freely signed up to.

“We will defend democracy in eastern Europe and around the world.

“Our support for Ukraine’s sovereignty and territorial integrity is unwavering. We are clear that any Russian incursion would be a massive strategic mistake, for which there would be a severe cost.

“The Russian Government needs to de-escalate, pursue diplomatic channels and abide by its commitments on the transparency of military activities. We will be discussing this at the NATO-Russia Council next week.”

US secretary of state Antony Blinken and his counterparts held online talks to prepare for the first meeting of the Nato-Russia Council in more than two years.

That meeting on Wednesday in Brussels will give Nato ambassadors the chance to discuss Mr Putin’s security proposals with Russia’s envoy face to face.

Tory MP Bernard Jenkin wrote in House magazine: “Putin’s goal is nothing less than to demonstrate the end of US global hegemony and to establish Russia as its equal; the pre-eminent power able to drive a wedge between Europe and the USA.

“Many Western leaders, and the bulk of the Western public, have not yet understood that Ukraine is merely one component of a long-running hybrid campaign against the West.

“Russia’s campaign is conducted like a war, with a war-like strategic headquarters at the National Defence Centre at the old army staff HQ, where all the elements of the Russian state are represented in a permanent war-like council, re-analysing, reassessing and revising plans and tactics.

“The whole concept of strategy as understood and practised by Putin and his colleagues is as something completely interactive with what their opponents are doing.”

NATO would have to agree to halt all membership plans, not just with Ukraine, and end military exercises close to Russia’s borders.

Endorsing such an agreement would require NATO to reject a key part of its founding treaty.

Under Article 10 of the 1949 Washington Treaty, the organization can invite in any willing European country that can contribute to security in the North Atlantic area, as well as fulfil the obligations of membership.