The grave warning to the EU was made by political commentator Brian Maguire on Euronews after EU Parliament President Antonio Tajani gave a statement claiming populists in Italy were isolating the Mediterranean nation. Mr Tajani said: “Italy is isolated. When you shout, scream and insult then you remain alone and results are very modest.” Euronews host Tesa Arcilla asked Mr Maguire: “The Salvini-Le Pen alliance… does it seems that now he’s shopping for friends?

“Does it seem that Italy is actually more isolated now after the election results came?”

“Salvini’s game is much bigger than that.

“He’s got problems with the budget deficit, with GDP and growth. 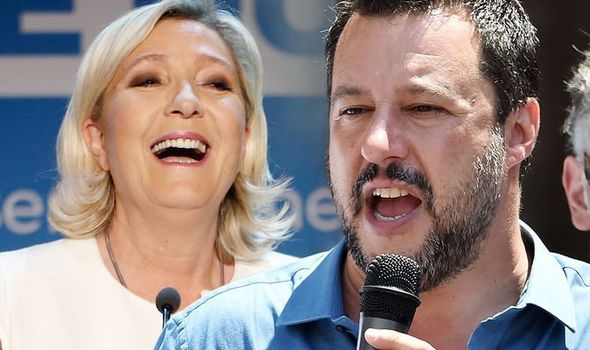 “Where he may find he has friends across bigger parts of the group is when it comes to reforming the eurozone.

“The eurozone prioritises inflation above employment – it is is a big north-west, east-west divide in Europe.

“There is, within the progressive groups, a strong desire to reshape the eurozone – to put employment first.

“If he does that, he may get somewhere towards what he’s looking for.”

Mr Salvini was keen to secure the services of the 29 Brexit Party MEPs in order to gain a superior foothold in the EU Parliament’s decision-making processes.

But the Brexit Party chief announced he would not be joining the Italian’s Europe of Nations and Freedom when the new Parliament sits for the first time in July.

Mr Farage said: “I can confirm that this is not the case and that the Brexit Party will not be joining the ENF Group.

“Following a brief social meeting with a member of the ENF group last week there has been much speculation, fuelled by that individual, that the Brexit Party will join them in their European Parliament group.”

A number of Brexit Party MEPs have privately raised concerns about joining Mr Salvini and French eurosceptic Marine le Pen’s National Rally in a group because of their hardline views.

Mr Salvini is struggling to recruit numbers for his supergroup, with Poland’s Law and Justice and Hungary’s Fidesz.