Ex-NYPD cop Valerie Cincinelli was slapped with four years in prison for obstruction connected to an alleged plot to assassinate her estranged husband and her boyfriend’s teen daughter.

U.S. District Judge Joanna Seybert went easy on Cincinelli in a Long Island courtroom Friday, locking her up for one year less than the five prosecutors requested.

Assistant U.S. Attorney Catherine Mirabile wrote in a scathing sentencing memo, “This conduct is particularly egregious considering Cincinelli was a uniformed NYPD officer at the time of her crimes.”

Cincinelli’s attorney James Kousouros argued for a sentence of time served, noting that his client has already been behind bars for 30 months since her arrest in May 2019. He said that Cincinelli, 37, was only venting when she talked about having her husband and boyfriend’s daughter murdered.

“We’re very pleased with the overall outcome of the case,” said Kousouros after the sentencing. “Ms. Cincinelli is eligible for release within the next few months given the time she’s already served.” 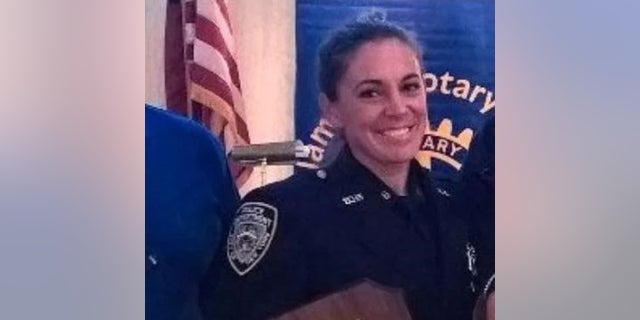 Cincinelli pleaded guilty April 16 to one count of obstruction for deleting incriminating evidence on her phone related to the plot. In exchange, prosecutors agreed to drop the two murder-for-hire counts against her.

The disgraced cop allegedly paid her then-boyfriend John Dirubba $7,000 to hire a hitman to kill her estranged husband, Isaiah Carvalho Jr., in the midst of an acrimonious divorce and custody battle over their son. She also has a daughter from a prior marriage.

Cincinelli, a 12-year NYPD veteran working in the domestic violence unit of a Queens precinct at the time, wanted her husband knocked off so he wouldn’t receive part of her pension, according to court papers.

Her list of targets soon expanded to include Dirubba’s 13-year-old daughter “out of sheer jealously and personal hatred,” prosecutors wrote in court papers.

In a recorded conversation with Dirubba, Cincinelli expressed frustration that the teen girl was taking up too much of her father’s time and money. “Run her the f—k over, how about that?” she suggested to her then-beau.

The plan unraveled after Dirubba was arrested for another crime, confessed to the murder-for-hire plots and cooperated with the FBI against Cincinelli. Dirubba wore a wire that captured the pair scheming to eliminate Carvalho and the teen girl.

Law enforcement set up a sting with the help of Carvalho, falsely telling Cincinelli that her husband had been murdered. Agents directed Dirubba to show her a staged photo of her husband dead in a car and tell her it was from the hitman.