Terrorism experts say there is a serious risk that volatile individuals in the “freedom” movement will carry out lone attacks as they become radicalised by talk of executions, taking up arms and martyrdom.

Leading terrorism expert Greg Barton said he was most concerned about the potential for a vulnerable individual to be inspired by extreme rhetoric promoted by influencers within the anti-vaccination movement. 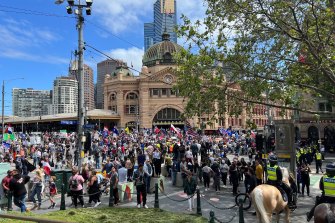 Protesters block the intersection of Flinders and Swanston streets during a rally last month.Credit:Ashleigh McMillan

“My immediate worry is that an individual may decide to go and do something by themselves and it’s quite likely [to be] somebody who has got other issues going on in their life,” he said.

The movement, responsible for large anti-lockdown protests in 2020 and 2021, has become increasingly fragmented and searching for purpose since the lockdowns lifted, according to Institute for Strategic Dialogue intelligence analyst Elise Thomas.

“As people see that momentum start to ebb away, they start to switch from the sense that ‘we are winning’, to ‘we are losing’ … they feel a need to escalate to some sort of really radical action,” she said.

A central figure in the movement and founder of activist group Reignite Democracy Australia, Monica Smit, asked followers what they were “willing to die for” in a social media post in November. She recently described as “heroic” an incident in which a woman attempted to self-immolate in Melbourne, reportedly wearing a sign protesting against vaccine mandates.

“From what it looks like to me, she was willing to give up her life for this. And that in itself, no matter what the backstory is, that in itself is something heroic,” Ms Smit said in a video posted for her more than 74,000 followers on her Telegram channel.

Ms Smit interrupted a follower during a Q&A video conference on December 23 who suggested that she and others in the Snowy Mountains were planning to arm themselves out of frustration that their protest efforts had come to nothing.

“It’s got to the stage where we’re getting arms – archery, gun licences,” the woman said tearfully before Ms Smit cut her off, saying: “Stop, this is not the right forum to talk about that stuff, we can talk about that separately.”

Ms Smit later defended the exchange, telling The Sunday Age her followers were arming themselves to hunt for food due to concerns about shortages of a diesel additive which has threatened to halt the trucking industry and supply chains.

There was no explicit discussion of hunting or shortages in the two-hour session in which followers asked their leader for advice about being ostracised from their families, being fired from their workplaces over refusing to take a COVID-19 vaccine and pulling their children out of school to avoid them being vaccinated.

The Sunday Age unearthed other examples of content being shared in “freedom” groups urging the use of violence and weapons.

“People actually still think that we can solve this with the same three failed methods that people have been using for the last 10 years: petitions, voting, peaceful protests. None of them work – neither do your court cases,” one former white supremacist group leader said in a video days after the Old Parliament House fire, which was instigated last month by anti-vaccine, “sovereign citizen” activists.

“No matter how violent it has to be – smashing down the doors, pulling these people out of their offices and, you know, making sure their feet dangle off the ground with a little something around their neck.”

Extreme rhetoric about hanging executions has been normalised in the movement by conspiracy theorist Riccardo Bosi, a former special forces soldier who presents himself as leader of the “AustraliaOne Party”, an outfit that is not registered as a political party.

Mr Bosi, who appears at “freedom” rallies and whose organisation has tens of thousands of social media followers, said in a December interview his organisation would execute notable media personalities such as Alan Jones, Peta Credlin, Paul Murray and ABC chair Ita Buttrose for their apparent silence on a “vaccine genocide”.

Months on from the introduction of vaccine mandates for essential workers, large numbers of isolated Australians have either left their jobs or been sacked for refusing to get vaccinated and have just spent their first Christmas estranged from loved ones because of their views. 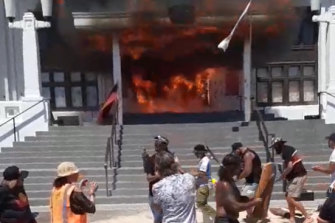 Last week’s fire at Old Parliament House is a warning of the potential of radicalised followers of the ‘freedom’ movement.Credit:Facebook

The fire last month at Old Parliament House should serve as a “warning shot” of the threat posed by a small group of radicalised individuals – especially months out from a federal election, according to Deakin University extremism researcher Josh Roose.

“It’s effectively an indicator of the potential of these groups for violence,” he said.

“The underpinning distrust in science and government hasn’t gone away,” he said. “And it’s been actively stoked very cynically by populist politicians.

“[If] it’s not taken seriously and investigated … then we risk being well behind the eight-ball.”

The threat of violence during the pandemic has been previously associated with far-right, neo-Nazi personalities who are attempting to recruit on the fringes of the movement, but Professor Barton said rhetoric just as concerning was coming from activists with larger followings and more mainstream appeal.

Ms Smit’s organisation has promised to back Craig Kelly and Clive Palmer’s United Australia Party at the upcoming federal election, and her partner, Morgan Jonas, is running as a candidate for the party in Health Minister Greg Hunt’s seat of Flinders. 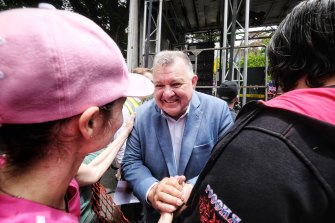 “She’s playing with fire because somebody like [the man responsible for Sydney’s Lindt Cafe siege] will respond to that language and say, ‘okay, I’m going to be that person’,” Professor Barton said.

“That’s why people are starting to think of ways to support themselves with food and community,” she said.

Ms Smit, who has propagated a theory to her followers that they may eventually be placed in “concentration camps” for the unvaccinated, assured them in the December video conference that their commitment to staying unvaccinated was a trial from God. 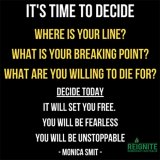 “You can be in the quarantine camp with your head held high knowing that you did your best.”

Ms Smit told The Sunday Age that her organisation “has and never will advocate for violence”.

“In fact, we’ve openly discouraged it and always advocate for peaceful campaigning only,” she said.

“Nothing I’ve ever said could be misinterpreted to be calling for any type of violence whatsoever. I’m a Christian and we never solve things with violence, we use our words and negotiation.”

Mr Bosi did not respond to a request from The Sunday Age to explain his violent rhetoric.

A spokesperson for national security agency ASIO said it believed the threat posed by “a subset of these minority groups who wish to escalate protest to violence” would “not diminish any time soon – and may well grow”.

“The online environment is a force multiplier for extremism; fertile ground for sharing ideology and spreading propaganda,” they said.

“We are seeing a growing number of individuals and groups that don’t fit on the left–right spectrum at all,” the spokesperson said.

“Instead, they’re motivated by a fear of societal collapse or a specific social or economic grievance or conspiracy.”