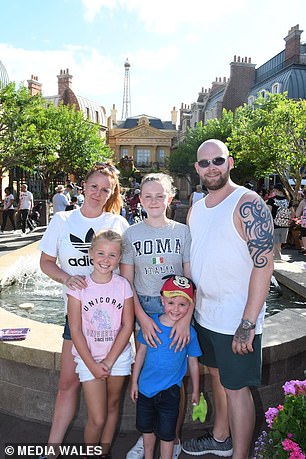 Cai Williams, his wife Leonna and their three children pictured above

A family who spent £5,000 on their dream Thomas Cook holiday to Disney World have described how the trip became a ‘nightmare’ after discovering blood on the bedsheets.

Cai Williams, his wife Leonna and their three children had been looking forward to spending quality time together at the Disney World Resort in Orlando.

The family-of-five from Caerphilly paid a total of £3,500 for the five of them for flights and accommodation, and £1,500 for park entry for the two weeks.

The trip had been organised for Heather Schofield (Leona’s mother), her three daughters, husband and children.

The party of 16 had come together to celebrate her 60th birthday.

However, before the Williams family even left the country, Thomas Cook had contacted them to change their flight departure from Gatwick to Manchester.

That was changed back to Gatwick about a month before they were due to fly on April 20.

They arrived at the airport to be told their flights were fine, but there had not been an allocation for their baggage, and they had to pay extra to put their luggage on.

Their issues however, did not end there. When they arrived at the Rosen Inn International in Orlando they were told that their rooms were not booked out for them for another two days.

The family feared the worst, but the hotel allowed them to stay overnight if they paid £100 each per family for a room – which they were hoping to redeem if they could sort the situation out with the holiday reps before 10am the next day.

Mr Williams said: ‘We just want some answers. It was disgusting. My wife, my children, my mother-in-law – all they did was cry. It was horrible. That night at reception, not knowing if we had a room, the kids were really scared. They were also knackered.’

The family complained about the rooms which they said were covered in dust, with blood on the bedsheets. 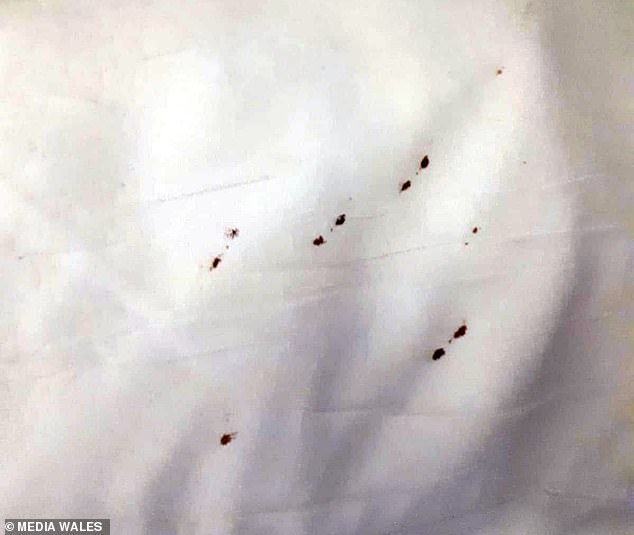 As well as having to share beds, the family found blood stains on the sheets (pictured above)

For the Williams family, and the others, the situation was far from ideal.

There were just two three-quarter sized beds in the shared room. This meant their 12-year-old daughter Alise, Ruby, seven, and Oliver, five, had to share one bed.

What exacerbated matters was that the original hotel the families had been booked into, which was changed before the holiday because of potential noise issues, was a self-catering suite, but the hotel rooms the families were staying in had minimal facilities, which meant they had to eat out more often. 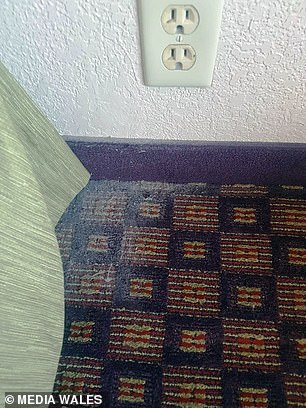 The family complained about the state of their hotel room, and said there was dust on the floor (above)

Mr Williams said he thought that added another £1,500 to the cost of his immediate family’s holiday.

He said the first couple of days were spent trying to sort out the issue with the holiday reps, who were very helpful at the resort. But that meant they missed out on the first days of their two-week pass to the Disney attraction.

Eventually the family was given a temporary bed for the room. The representatives also provided the families with vouchers for activities, but they found out those were generally available elsewhere anyway.

An attempt to be moved to another hotel failed, as they were told all the similar hotels were booked up.

But the final straw was when the families were coming to the end of their holidays and found out they should have had vouchers to cover their breakfast, but these hadn’t been provided and they had paid for their breakfasts.

A Thomas Cook spokeswoman said: ‘We’re very sorry for the inconvenience caused to… all the family at the beginning of their trip to Florida. We recognise we made a mistake with the hotel booking and we’re investigating the issues raised. In resort, we did everything we could to try and put things right, including offering meal vouchers. We have contacted Mrs Hibbs and we hope to be able to resolve this.’

After the initial mix-up with the accommodation Thomas Cook said no further complaint was made in resort. On May 20 the customers complained to Morgan Travel, not Thomas Cook direct.