It’s a jungle IN here! Father, 34, spends £6,000 turning his family home into a giant greenhouse full of 200 species of plants… much to the frustration of his long-suffered wife who is regularly ‘smacked in face’ by leaves

A fern-loving father has transformed his home into an indoor jungle – after blowing £6,000 on exotic and indoor plants, much to his wife’s dismay.

Digital marketer Jonny Balchandani, 34, has taken over the family home in Malvern, Worcestershire, with over 200 species of flora and fauna.

But the bustling indoor bushes have proved a obstacle for long-suffering wife Charlotte Evans, 33, who often gets ‘smacked in the face’ by leaves and bushes.

Tolerant Charlotte admits she found her hubby’s ‘vice’ a bit of a ‘slap in the face’ at first and but has learnt to love the greenery.

Jonny said: ‘It’s literally like walking into a little jungle. Every day I spend, on average, a couple of hours looking after everything. To me, it’s two hours to myself during the day rather than a chore. Plants give you that time to be with yourself.

‘I’d probably say we have more than 2,000 plants now. It really is like an indoor jungle. It’s just become a total passion. 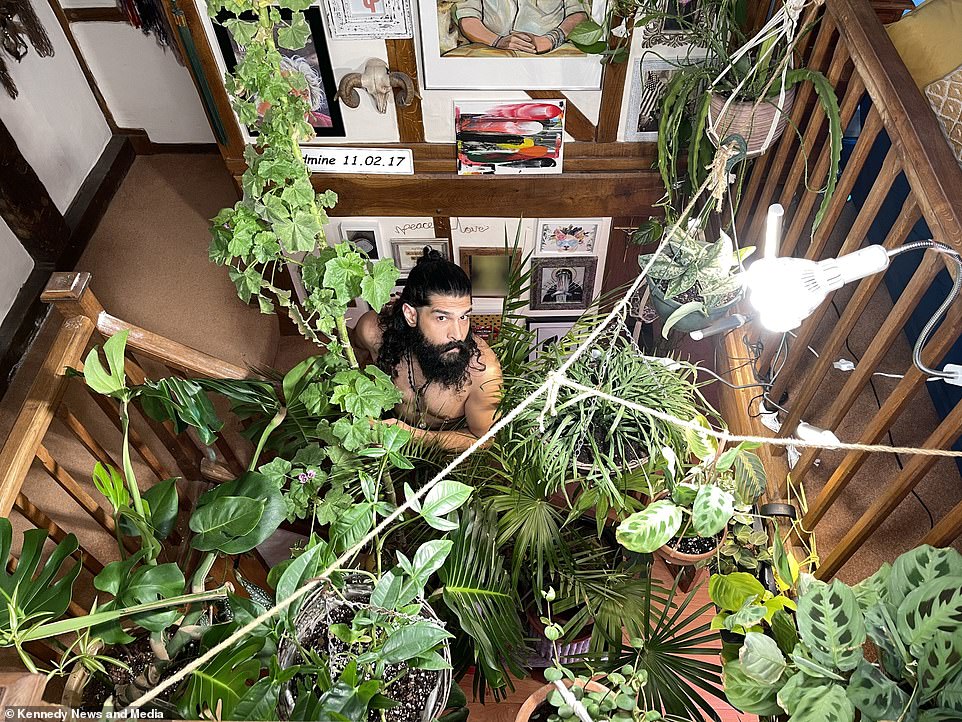 Digital marketer Jonny Balchandani, 34, has taken over the family home in Malvern, Worcestershire, with all the plants 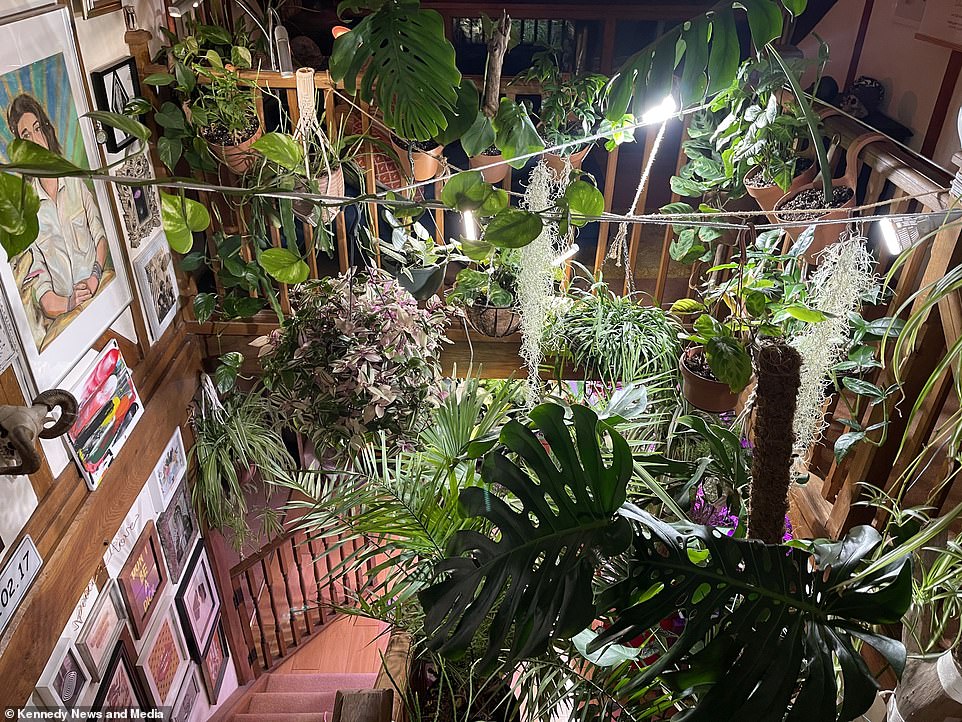 The green-fingered father blew £6,000 on exotic and indoor plants, much to his wife Charlotte Evans, 33, dismay 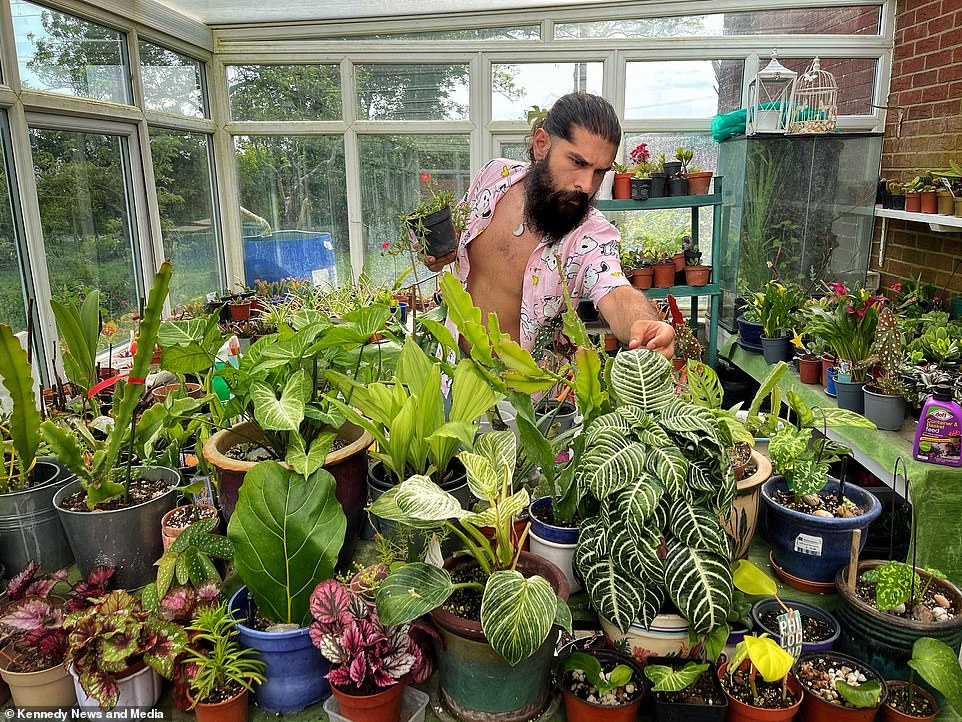 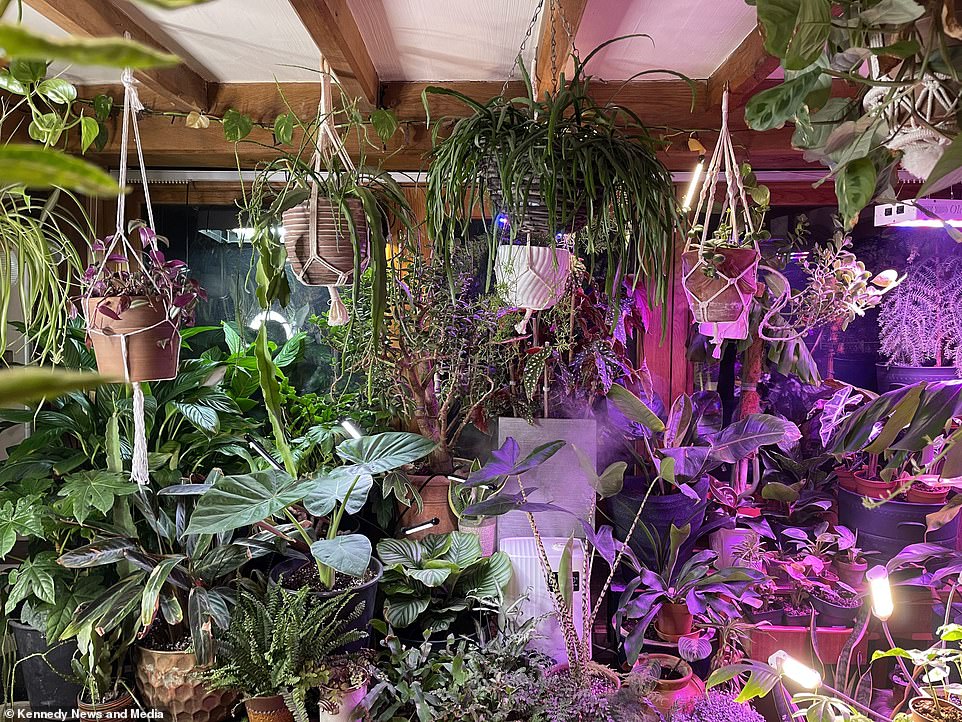 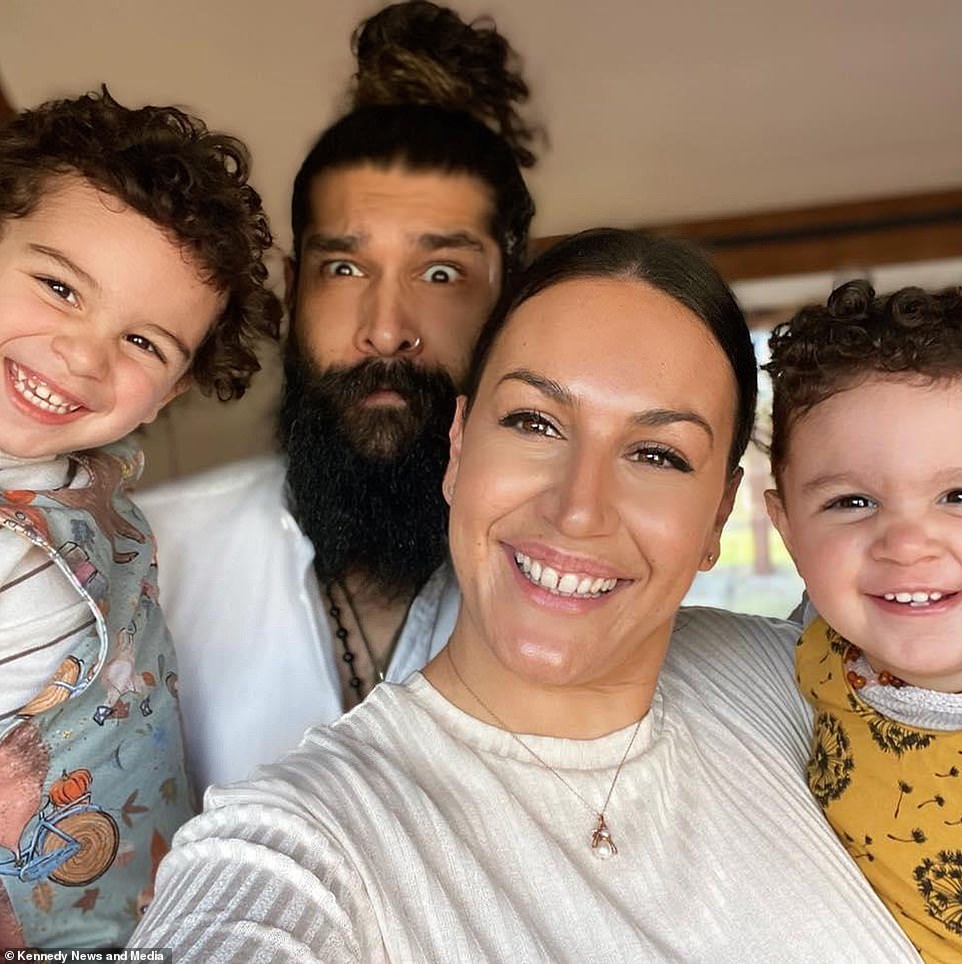 ‘People who visit the house tend to be slightly shocked. You can see a couple of plant pots as you walk in through the door, then as soon as you get through the door, it’s above you, around you, right, left, everywhere.

‘They look at it for a couple of seconds with their mouths open, then they’ll start laughing and saying ‘what is this?’ It’s incredible.’

The couple’s children Phoenix Rayne, three, and Tallulah Rose, two, don’t even need to go outside to play hide and seek in the brush – they can have just the same adventure indoors thanks to the ‘jungle’.

Charlotte said: ‘I’ve always had a love for the plants, but I’ve never met somebody who’s got so much of a passion for plants in general – indoor and outdoor.

‘It was a bit of a slap in the face at first but [now] I see his passion and how good he is at keeping plants alive.

‘Even my friends will bring plants around that are dying and say ‘Jonny, can you fix it for us?’

‘Being able to help Jonny and get involved in watering and repotting is so therapeutic. I genuinely really enjoy it. 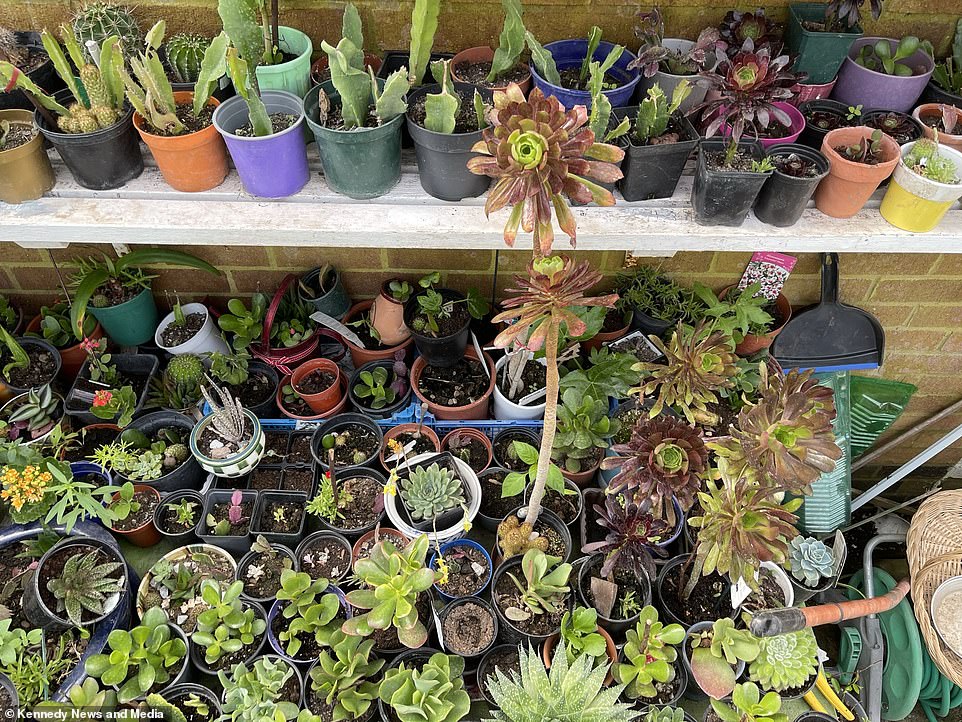 Visitors who visit the house he says ‘tend to be slightly shocked. You can see a couple of plant pots as you walk in through’ 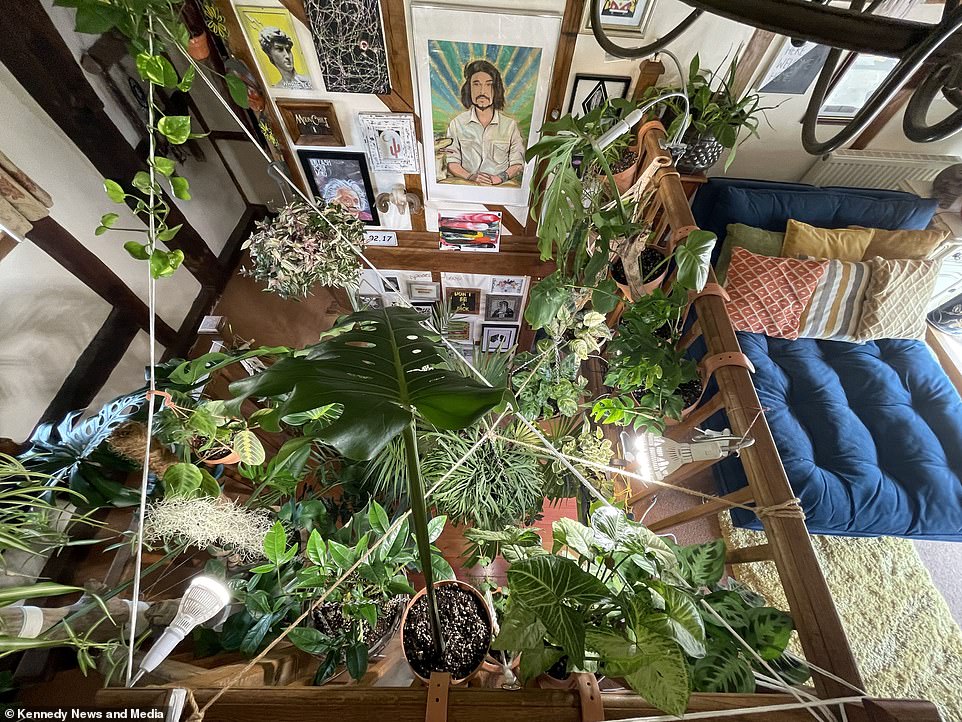 The couple’s children Phoenix Rayne, three, and Tallulah Rose, two, don’t even need to go outside to play hide and seek 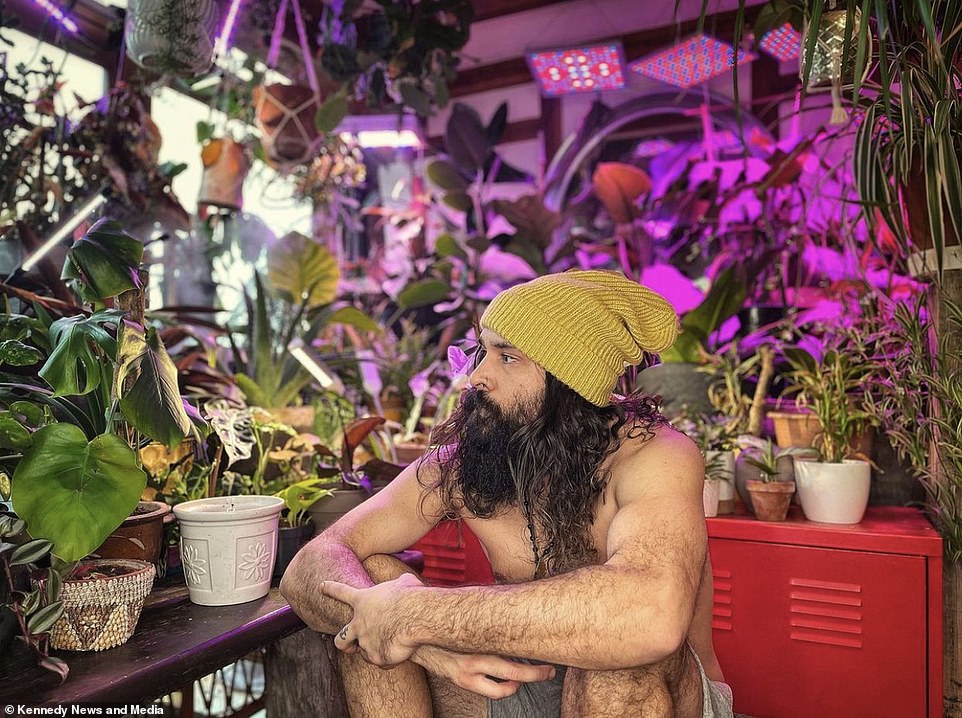 Jonny Balchandani is determined to get more plants growing in their converted barn, despite already having hundreds 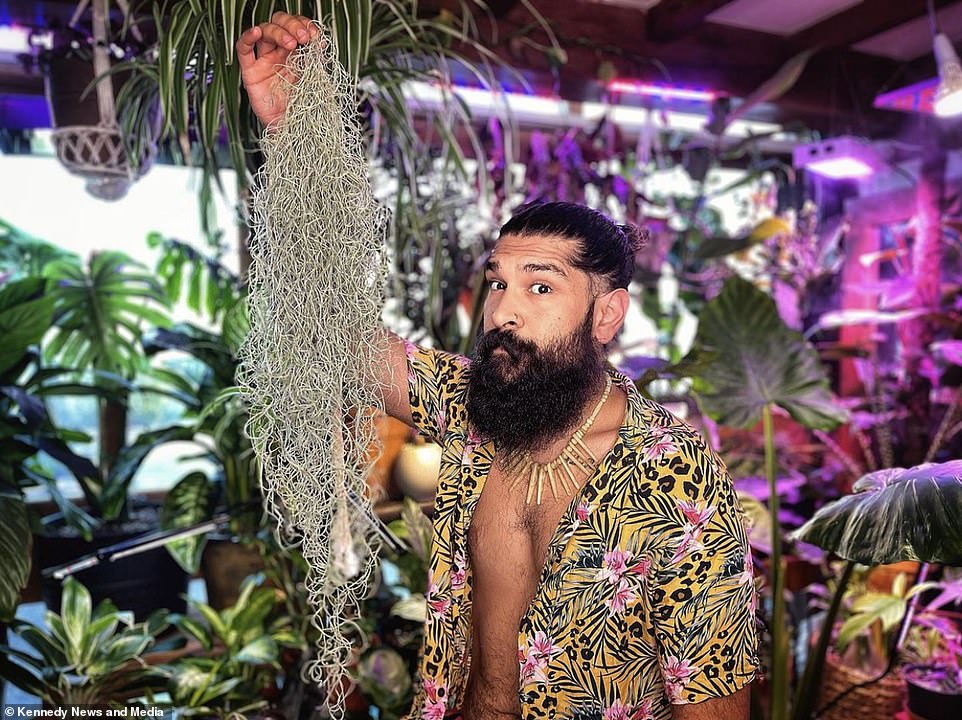 Some of the plants and fauna are very rare and have an unusual appearance, but all contribute to the indoor jungle

‘Jonny doesn’t go out and drink, he just plays with his plants. That’s his vice. I’d rather that than him be at the pub every weekend.

‘Sometimes I feel like we’re being taken over by plants.

‘It’s kind of taking over. Sometimes I think to myself ‘oh my god, it’s actually turning into a jungle’.

‘Even the guests from the holiday home asked to come in and see it. They were like ‘wow, this is amazing’.

‘I’m so house proud and when he’s repotting his plants all the time, and the mess, it’s a nightmare, but when you can sit and look at it, it’s beautiful.

‘There are one or two plants that he has to move every so often because we’re both quite tall and it grows.

‘When we walk past, they hit you in the face. When you go up the stairs you have to duck and dive to get away from the plants.’ 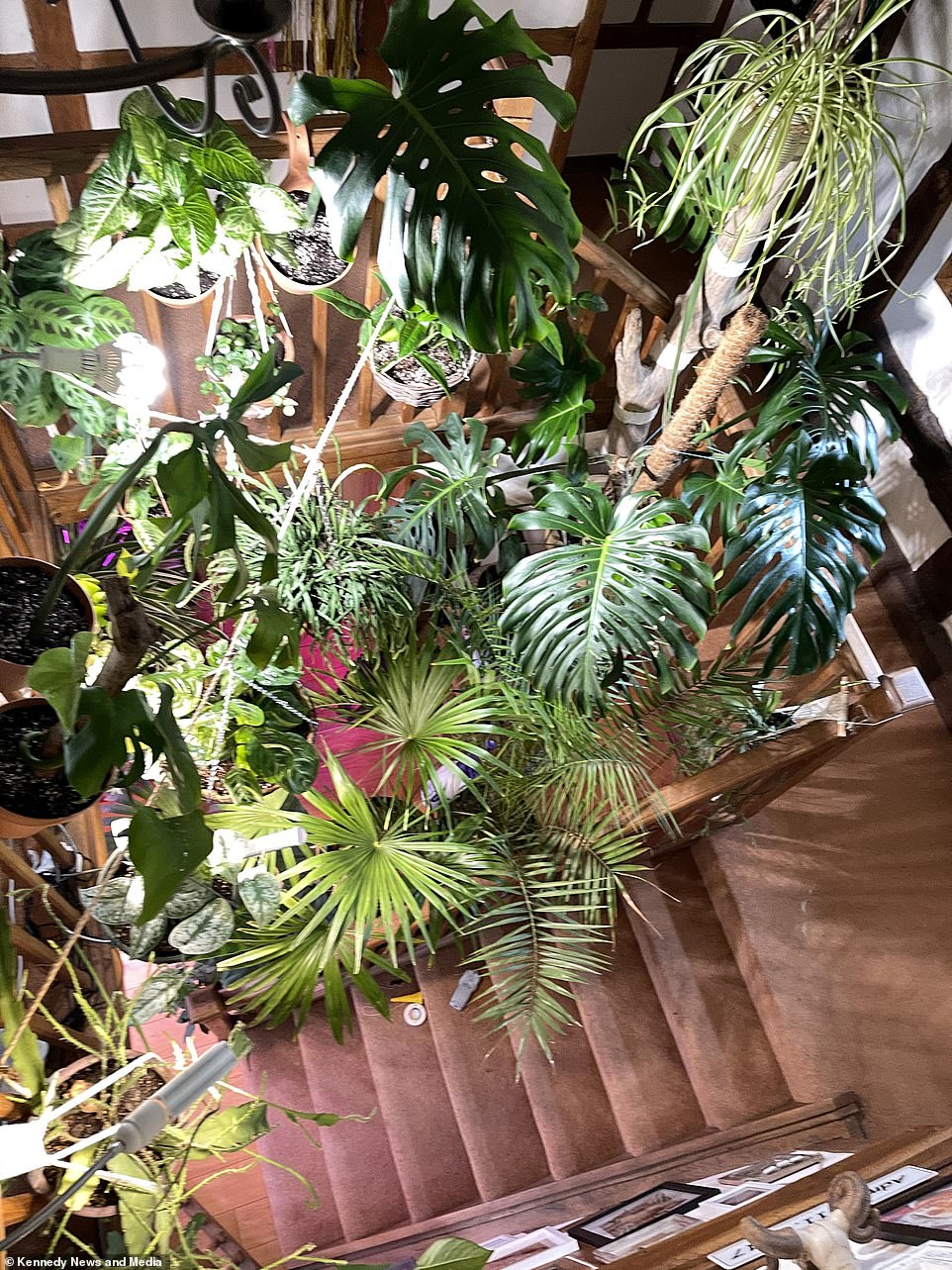 Jonny’s vice is growing and looking after plants. Wife Charlotte said ‘He doesn’t go out and drink, he just plays with his plants’ 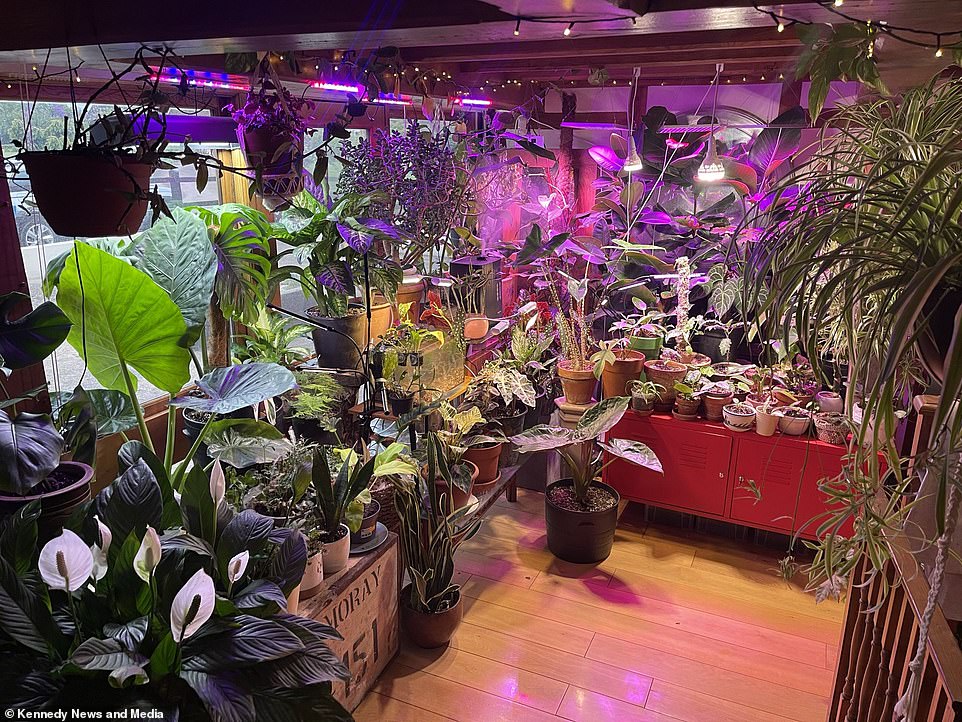 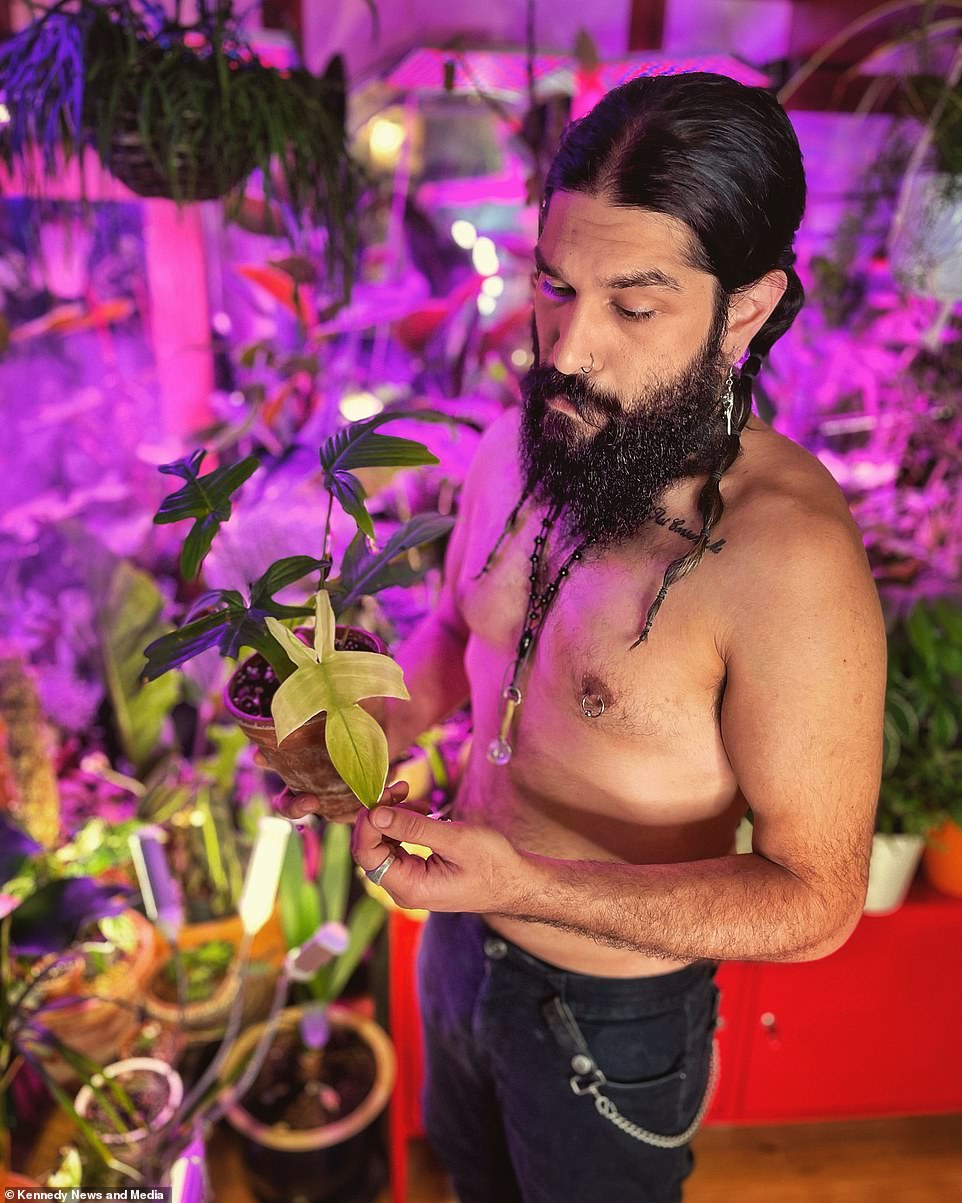 Jonny’s love of horticulture first stemmed as a young child when his mum Pamela shared her passion of outdoor plants.

Now, he prefers indoor plants and has more than 1,000 in his greenhouse alone – but admits his ‘prized possession’ is his 15-year-old cheese plant.

‘I’ve always had a plant in my room while growing up. As soon as I got my own apartment, I started collecting them aged 19 or 20.

‘There’s been some catastrophes along the way. I’ve got at least 10 plants I’ve had right from the beginning.

‘My cheese plant is my prized possession. I’ve had it for 15 years from a tiny little wet stick. It’s now got leaves that are nearly a meter long.

‘I used to work and live in Paris and didn’t have a lot of space and a garden. It was more about indoor plants that looked a bit more tropical. When I came back to the UK, I brought some of my collection back with me.

‘I finally got settled and with covid hitting and being on lockdown, it took over the second level of the house. I went from having about 20 plants to having over 600 in the house then propagating them.

‘The greenhouse has over 1,000 different indoor and outdoor plants, and succulents and cacti now.

‘Unfortunately, to my wife’s dismay, I don’t feel there are too many.

‘However, I do go through phases where there are some plants that I’ve become slightly less of a fan of, in which case they get moved out to the greenhouse and replaced with something else.

‘It’s something that sometimes has had a bit of irritation when she walks through and gets smacked in the face with the plants.

‘It’s something she’s embraced over time and got a lot more into. Mainly into the propagating side of things and marketing of the cuttings.

‘Of all of the stuff we do and propagate, all of the profits go to [the charity] Mind. It’s something that’s inspired by my mum and close to our hearts.’

Now the self-titled ‘bearded hippy’ is inspiring the nation after launching his Instagram page The Bearded Plantaholic, where he shares pictures of his amazing plant-based paradise and has amassed more than 3,400 followers in four months.

Jonny said: ‘It’s really kicked off on social media. I couldn’t believe it myself.

‘People are loving the collection, the way the photos are taken. It’s all about spreading positivity and love as well.

‘I think there’s always space to add more to the jungle. I’ve built up layers where there’s no shelves. I have hanging plants.

‘The kids love to hide all around the house, but the cat and dog have their own beds inside the ‘jungle’. They go and hide and chill as well.’