Victoria’s influenza wave has passed its peak, but the possibility of a second wave continues to loom over state hospitals that are already struggling to cope with the onslaught of COVID-19 and respiratory virus hospital admissions.

Hospitals and infectious disease experts confirm that Victoria has seen the back of a significant spike in flu infections and hospitalisations in May and June, with cases now dropping and returning to the baseline. 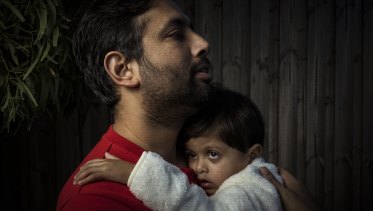 Gaurav Tripathi and his two-year-old daughter Paavika who had the flu earlier this year.Credit:Chris Hopkins

Victorian flu infections peaked in May, when 18,000 cases were reported to the Victorian Health Department, with a further 13,250 reported in June. This has fallen to 1200 so far in July.

These numbers are probably an underestimate, as they only include cases that were confirmed and reported to the department by testing laboratories, but hospitals are reporting a similar trend.

Royal Melbourne Hospital testing data shows there were 100 confirmed weekly cases of the flu during the spike in May, which has now tailed off and is sitting at 12.

Viral and bacterial respiratory pathogen test results at the Royal Children’s Hospital reveals 26 per cent detected influenza one month ago, which has now dropped to 2 per cent.

The Australian College of Emergency Medicine says there are presently more cases of respiratory syncytial virus (RSV) in Victoria’s hospitals than influenza.

Deputy director of the WHO Collaborating Centre for Reference and Research on Influenza, Professor Ian Barr, said Victoria had passed the peak of its influenza wave, but warned it was too early to rule out the possibility of a second wave hitting the state.

The US has experienced dual influenza peaks in a longer-than-usual flu season, with a spike in December, followed by a second spike in March, which is when the season usually ends.

Barr said Victoria’s flu season was “definitely past the peak, the only question now is whether we will see a rebound or it peters out for the rest of the season”.

“Many of the states are returning from school holidays now so the next few weeks will tell us if we will see a return, or we’re finished for the season.”

There have been 34,582 cases of influenza so far this year in Victoria. This compares with the past two years when influenza cases fell to as low as about 100 in 2021 and 4700 in 2020, due to COVID-19 border closures and lockdown measures all but eliminating the flu over the two-year period.

This fuelled expectations of a bad flu season this year due to the waning immunity levels in the community. But the number of flu-related hospital admissions and deaths around the country so far is fewer than in 2017 and 2019 – two monster years for the flu. 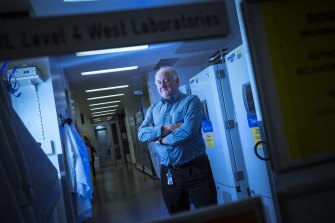 Professor Ian Barr warns it’s too early to rule out the possibility of a second flu wave hitting the state.Credit:Chris Hopkins

The flu season also occurred earlier than usual this year. The season typically starts in June and peaks in August, and sometimes as late as September, but this year started in April, peaked in May and June, and is now petering out.

Barr said behavioural changes like mask-wearing and isolating indoors to avoid catching COVID-19 may have also protected people from catching the flu.

Getting infected with COVID-19 may actually lower someone’s chance of catching the flu, Barr said. This concept, called virus interference, is when “one virus pushes out the other virus or doesn’t let the other virus get in”.

“Your body reacts to the virus, so some of the reaction to COVID-19 makes it more difficult for other viruses to infect you.

“It’s probably not so pronounced in kids because they get multiple infections at once, but is a real effect, even though it is only short-lived; it only lasts for a number of weeks.”

The Australian College of Emergency Medicine’s Victorian acting chair, Dr Belinda Hibble, said hospitals saw an influenza peak in May and June, when people presented with fever, cough and respiratory symptoms to emergency departments and were diagnosed with the flu. But the flu has now been overtaken by RSV in hospital emergency wards, she said.

“Influenza is often a more severe illness than RSV, but RSV was hitting people in higher numbers which is causing higher presentations at hospitals.”

The onslaught of climbing COVID-19 admissions has put an unprecedented strain on hospitals during the busiest time of the year in winter, when flu and RSV infections are typically high.

Hibble said a second wave of the flu would push emergency departments to the brink.

“Emergency departments are already dangerously overloaded so any increase in demand – by a second wave of flu, or anything else – would make a difficult situation even worse.”

A Health Department spokesman said the state’s high vaccination levels were “helping to reduce the number of flu infections which is why we continue to encourage Victorians to stay up to date with both their flu and COVID-19 vaccinations.”

In Victoria, 42 per cent of people have been vaccinated against the flu, with 40 per cent of all Australians getting the jab.

“While this year’s flu season has been early, short and sharp, we can’t be complacent as we can expect more cases later this year, when holidaymakers return from trips to the Northern Hemisphere,” the spokesman said.

“We also need people to continue staying at home when they’re unwell, use air purifiers if possible and either avoid or wear a mask in crowded indoor places.”

Scooter Braun on Taylor Swift feud: 'I learned an important lesson from that'

Queen’s funeral: Fergie arrives at Westminster Abbey We use your sign-up to provide content in ways you’ve consented to and to improve our understanding of you. This may include adverts from us and 3rd parties based on our understanding. You can unsubscribe…

LOTR: The Rings Of Powers Nazanin Boniadi Calls For Action After Death Of Mahsa Amini In Iran Guest Column