Five former students of Brighton Secondary College are suing the state of Victoria over what they allege was years of anti-Semitic bullying and discrimination at the government school and chronic negligence by its principal and some teachers in their duty to protect them. 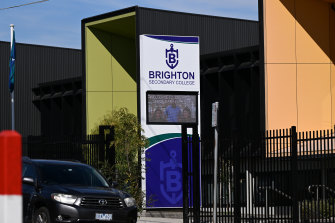 Five former students of Brighton Secondary College are suing the state over the school’s alleged failure to protect them from years of anti-Semitic discrimination and abuse.Credit:Joe Armao

The students, all of Jewish descent, are seeking damages for alleged breaches of their human rights and of the Racial Discrimination Act.

They allege the school tolerated a culture of anti-Semitism that deprived them of their right to safety and to an education.

The Federal Court on Tuesday accepted a request to suppress the names of more than 20 other students alleged to have victimised the five students over several years, before an expected hearing later this year.

Four of the five students have said in a statement of claim filed with the court that they left the Melbourne bayside school prematurely to escape the alleged serial racist abuse and discrimination that occurred between 2013 and 2020 and the school’s repeated failure to protect them or discipline perpetrators.

It is claimed by one former student that the experience of being at Brighton was akin to “prison culture” in which “snitching” to a teacher only increased the bullying.

In one of the most severe allegations contained in the statement of claim, one year 9 student said he was forced into a toilet cubicle by four boys and had a knife held to his throat, was punched in the stomach and threatened with further harm if he spoke out.

The boy claims he reported the alleged attack to staff at the school’s front office, including the name of the boy who held the knife to him, but the event “went entirely un-investigated and unpunished”.

Within three to four weeks, “too scared … to remain at the school”, the boy had transferred to Liebler Yavneh College, an independent Jewish school in Elsternwick.

Many of the allegations relate to frequent verbal abuse of the five students, often within earshot of staff, it is claimed, including taunts of “Jewboy”, “skullboy”, “Heil Hitler”, and “burn in an oven”.

Swastikas were often graffitied around the school, the boys were subjected to Nazi salutes, while one boy claims to have had Star of David symbols, a reference to the Holocaust, scrawled on the front of his schoolbook and stuck on his locker, it is alleged.

A boy who began to wear a kippah or skullcap to school claimed it was regularly torn off his head and sometimes tossed around as a Frisbee.

In its response, also filed in the Federal Court, the school accepted “there were some acts of intolerance by students at Brighton Secondary College in 2013-20” but it denies legal liability.

“Those acts included some acts of antisemitism, but also included acts concerning physical appearance, sexual orientation and other attributes,” the response states.

“To the best of the respondents’ knowledge, the antisemitic acts were small in number and done by a small number of students.”

The respondents, it is alleged in the statement of claim, at times also singled out the five boys over their Jewishness.

This included, it is claimed, pulling a student who had “started growing facial hair in accordance with Jewish tradition and law” in front of other students and questioning why he was not shaving; addressing one of the students in Hebrew in class and making anti-Israel comments during lessons.

The school’s efforts to address anti-Semitism also backfired, it is claimed.

For example, the study of the Holocaust graphic novel Maus merely “opened up a whole new chapter for anti-Semitic jokes”, including referring to the Jewish students as rats.

The former students also refer in their statement of claim to an assembly speech that school principal Mr Minack made in March 2019 in which he told students his father was conscripted into the German army during World War II but was a good man.

In its defence, the school said that the speech, given soon after the Christchurch massacre, was a plea for tolerance and an expression of “how easy it is to normalise differences and divisions between people through language”.

It rejected claims swastika graffiti was tolerated and said steps were taken to remove them and investigate who drew them.

“The allegation of ‘antisemitic attitudes and apathy that flowed from the top down [and] which were normalised’ is wholly rejected,” the school stated in its response.

“The respondents rejected all forms of intolerance, including antisemitism.”

Man, 22, raped by his dealer as punishment for racking up £500 drug debt