A former St Kevin’s student and artist has set his old blazer alight on the school’s oval to protest historical allegations of misogyny and homophobia at the private boys’ school.

In an Instagram post sharing images of the protest that has been seen by tens of thousands of people, photographer James Robinson, 26, admitted to breaking into the school grounds on Tuesday evening after something in him “snapped”. 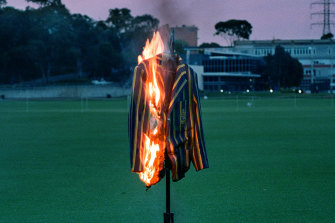 He dedicated the photos of the burning blazer to “current students and victims of St Kevin’s, and schools like it, who feel their identity is slowly being chipped away by a hyper-masculine culture”.

“This protest takes my healing full circle. I burn my blazer not in anger, but in hope for regeneration. I kiss my partner not in spite, but to bring love back to the only place that ever taught me shame.”

Mr Robinson, who is usually based between Los Angeles and New York, said he had felt compelled to act after allegations former student and Collingwood star Jordan De Goey had “forcibly touched” a woman and assaulted a man on a New York dance floor were made public.

Mr Robinson, who has forged a successful career as a fashion and celebrity photographer in the US, told The Age he felt “the patriarchy and culture” at St Kevin’s had reached beyond Melbourne and into New York, a place he regarded as a safe space for himself and the queer community.

The police charges against De Goey relating to the woman have since been dropped, but the Magpie is still charged with assaulting and harassing the man.

“St Kevin’s is a bubble where privileged young men can rehearse oppression without consequence, before graduating with flying colours into public. A place where ‘locker room talk’ exists openly in hallways and classrooms,” Mr Robinson wrote.

“I saw a system designed to let young boys think they can do anything … and get away with it.”

He said teachers during his time at the prestigious boys’ school had caused him to feel shame about his sexuality and recalled an instance where fellow students had tricked him into coming out as gay online at 15 and bullied him relentlessly afterward without consequences.

“It took me just growing a little bit older … to actually fully reflect on exactly how deeply the toxic shame that was embedded in that school has affected me and my personality,” he said.

The burning of his school blazer symbolised the destruction of this part of his adolescence and a resurgence from the ashes.

Mr Robinson, who has an online following of almost 37,000 people, said his inbox had been flooded with similar stories and messages of support from other students. 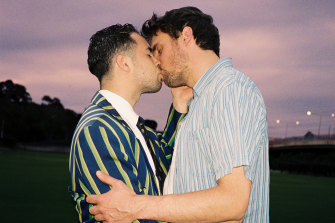 In a letter addressed to parents and students on Thursday morning, principal Deborah Barker said she had taken immediate steps to reach out to Mr Robinson, who had agreed to meet in person.

“I genuinely want to listen to, and fully understand, his heartfelt concerns and his personal journey. Most importantly I want James to know that we care for him and acknowledge his courage for speaking out,” Ms Barker wrote.

She thanked current and former students who had posted messages of support for Mr Robinson and urged them to reach out to their teachers and the school’s psychologists if they needed support.

“St Kevin’s College is on a journey of culture renewal, with a focus on inclusion and welcome for all. There is much goodness in our College and yet we still have much to do,” Ms Barker said.

An assessment on the culture at the private boys’ school in July found misogynistic language and sexist behaviour continued 18 months after the issue blew up in public.

The report came after an incident in which students from St Kevin’s were filmed singing a sexist chant on public transport and Four Corners revelations former principal Stephen Russell and a former dean of sport gave post-conviction character references for a child sex offender who coached sport at the school and was sentenced for grooming a year 9 boy.

It found many female staff did not believe it had a culture that supports respect for women and other genders and that there was “still a lot of hurt” in the school community.

Ms Barker, the school’s first female principal, said the report was painful reading, but it was an important school to build trust and transparency.

“It has become clear in my first year, of the importance of listening deeply as we strive to deliver a safe and inclusive environment for all of our students in partnership with their families.”

Mr Robinson said he was thrilled to see a woman at the helm of the school, but the culture issues plaguing Australian private schools extended beyond St Kevin’s.

He said the core of the issue lay in the school’s reliance on profit, which led to principals and boards putting the reputation of the institution ahead of the safety of students like himself.