Amazon’s highly anticipated $1billion Lord of the Rings series will relocate filming to the UK in the latest loss for New Zealand after Prime Minister Jacinda Ardern announced strict border controls were here to stay.

New Zealand’s premier yesterday warned that border restrictions will continue until 2022 as she warned Kiwis they will face full lockdowns if the Government fails to keep the Delta variant out.

Ardern said she hoped to cautiously reopen to the rest of the world next year while maintaining the country’s virus-free status.

But Amazon, who are due to start shooting for the second season of the hotly-anticipated Lord of the Rings television series, decided to move their filming base from New Zealand to the UK as a result.

The $1billion production, which had already received rebates from the government, will start filming in the United Kingdom from next year – marking the first time the production won’t be created using New Zealand’s stunning landscapes.

Albert Cheng, co-head of TV for Amazon Studios, confirmed the relocation and said the company would not ‘actively pursue’ the five per cent financial uplift with New Zealand’s government. 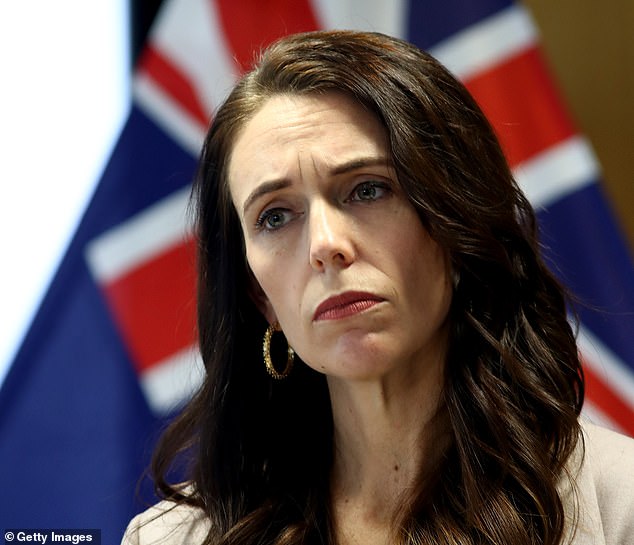 While the first set of television episodes followed in the footsteps of Peter Jackson’s epic trilogy by shooting in New Zealand, season two will be made in the United Kingdom.

‘We want to thank the people and the government of New Zealand for their hospitality and dedication and for providing the series with an incredible place to begin this epic journey,’ he said.

‘We are grateful to the New Zealand Film Commission, the Ministry of Business, Innovation and Employment, Tourism New Zealand, Auckland Unlimited, and others for their tremendous collaboration that supported the New Zealand film sector and the local economy during the production of Season One.’

Announcing the news that New Zealand faces the prospect of tough border measures until at least 2022, Arden said changes would be ‘careful and deliberate’ to avoid allowing variants such as the highly contagious Delta strain into the country.

‘Rushing could see us in the situation many other countries are finding themselves in,’ Ardern said, citing an outbreak of the Delta variant in neighbouring Australia that has forced its two largest cities into renewed lockdown.

The government is also warning its citizens to be prepared for a strict lockdown at the first sign of an outbreak of the Delta variant.

Ardern said the government planned to follow the advice of experts and maintain their elimination strategy.

‘While the pandemic continues to rage overseas, and the virus continues to change and mutate, the best thing we can do is lock in the gains achieved to date while keeping our options open,’ she said.

Ardern said the borders would not reopen until after New Zealand’s vaccine rollout was completed at the end of the year. Despite pledges that the country would be ‘at the front of the queue’ for the vaccine, the rollout has been much slower than in most developed nations, with less than 20 per cent of the population fully inoculated.

Officials also said they would delay second shots of the Pfizer vaccine in order to speed up first shots to protect more people as the threat of the delta variant grows.

COVID-19 Response Minister Chris Hipkins said the government’s response to an outbreak of the Delta variant is likely to be ‘swift and severe.’ New Zealand has stamped out the spread of the virus and had previously planned to rely primarily on contact tracing for any small outbreaks.

But Hipkins said the problems that Sydney currently faces in trying to contact trace a growing outbreak showed the delta variant was extremely hard to manage and that New Zealand’s tolerance for risk was now very low.

Its vulnerability was exposed after unvaccinated port workers in Tauranga berthed a ship where 11 of the 21 crew had tested positive for the virus. More than 90 port workers have been tested but so far no one has returned a positive test. 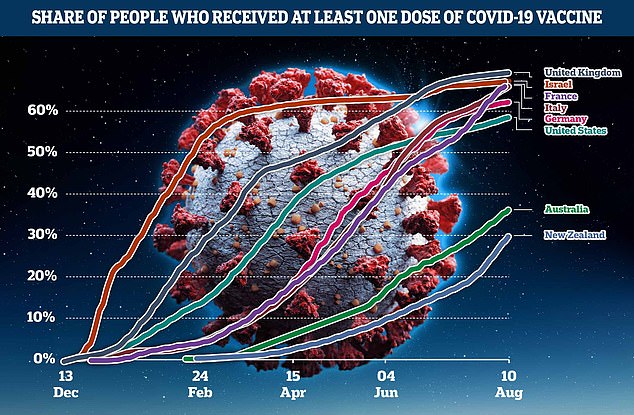 Ardern said the borders would not reopen until after New Zealand’s vaccine rollout was completed at the end of the year. The rollout has been much slower than in most developed nations, with under 20 per cent of the population fully inoculated 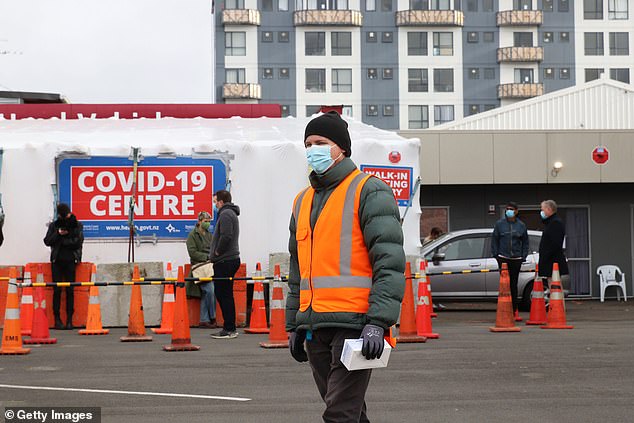 The announcement comes as Ardern faced calls to ease border measures from sectors such as healthcare, hospitality and agriculture, which are facing acute labour shortages due to the absence of foreign workers.

The country’s tourism industry – one of its main economic drivers – is on its knees with the borders shut to non-residents and non-citizens.

New Zealand’s success in erasing the coronavirus has allowed life to return almost to normal. The South Pacific nation of 5 million people has reported just 26 deaths since the pandemic began.

That’s been achieved in part by closing borders to those who aren’t residents or citizens.

But many question whether its feasible for New Zealand to maintain a zero-tolerance approach to the virus once international travel resumes.

Ardern said vaccinations would ramp up with the goal of offering jabs to all the eligible population by year’s end, allowing a relaxation of border policies.

She said that from the first quarter of next year, the country would begin allowing travelers to arrive on a carefully managed basis.

Under the proposed changes, international arrivals would be assessed on vaccination status and whether they have travelled from a country deemed high, medium or low risk.

The government did not provide a ranking of countries by risk, saying it could change quickly.

‘Our ultimate goal is to get to quarantine-free travel for all vaccinated travellers,’ Ardern said, without providing a timetable.

She said international travel would never be the same as it was before the pandemic.

‘Vaccines, border testing and maybe a bit of monitoring of symptoms when you travel will eventually become our baseline. And we will get used to it,’ she said. 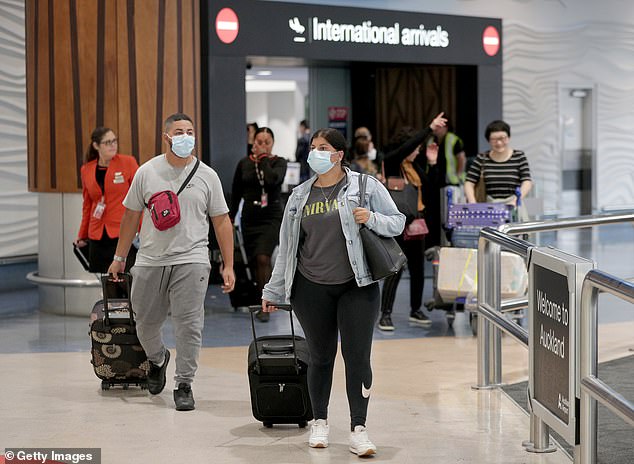 Ardern said a new trial would begin in October that would allow some business travelers to quarantine at home rather than in military-run hotels as a test of the new system it planned to introduce for medium-risk countries next year.

Ardern also announced it was increasing the standard time scheduled between Pfizer vaccine doses from three weeks to six weeks. She said the initial groups targeted for the vaccine – border workers and older people – had already been fully vaccinated.

‘From a population basis, it makes sense to get as many New Zealanders at least partially vaccinated quickly,’ Ardern said.

The changes were generally welcomed by business owners, including those in the struggling tourism industry. Before the pandemic, more than 3 million overseas travelers visited New Zealand each year and tourism was among the country’s largest industries.

‘It’s important to have a roadmap so all businesses, including tourism operators, can plan ahead and make informed decisions,’ said Chris Roberts, the chief executive of Tourism Industry Aotearoa.

Opposition Leader Judith Collins said Ardern’s announcements were a step in the right direction but the government needed to speed up its vaccination program.

About 29 per cent of New Zealanders have received one dose of the vaccine and 17 per cent are fully vaccinated.

A travel bubble with Australia faced numerous disruptions and was finally suspended in June as multiple outbreaks spread across the Tasman Sea.

Quarantine-free travel is allowed with the tiny Cook Islands, and New Zealand this month launched a scheme to bring in seasonal workers from Tonga, Samoa and Vanuatu without having to self-isolate.