Mr Paul Keating wrested the prime ministership from Mr Bob Hawke last night in a closer-than-expected 56-51 vote — the first time the Labor Party has dumped a federal leader in office. 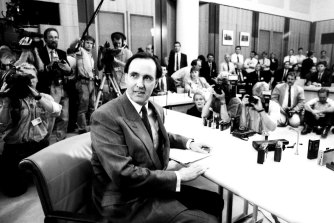 Paul Keating speaks to the media at after making a successful challenge to the leadership of Bob Hawke.Credit:Staff photographer

Labor’s longest-serving Prime Minister lost the ballot he called to end the leadership impasse that has paralysed the Government for weeks and dominated Labor politics for most of this year.

Mr Keating told caucus and his first news conference as leader that he would give priority to reducing Australia’s 10.5 per cent unemployment, the worst level since the Depression.

The Prime Minister-elect made the commitments to the Australian people — “to give everything I’ve got to the job and the country, to deal honestly with the people (and) to fight the battle against unemployment and for economic recovery”. He promised “never to turn a blind eye to the suffering that some are enduring.”

At a news conference in which he put on a brave and cheerful face, Mr Hawke pledged to give Mr Keating and his Government “my total support. I said to the caucus and now I say to you, don’t waste your time, you will not be hearing from me one word critical of Paul Keating and the new Keating Government”.

Mr Hawke went to Government House last night to resign his commission. Mr Keating will be sworn in at 11 am today.

After adamantly resisting advice from colleagues to stand down, Mr Hawke informed caucus yesterday morning that he would throw the leadership open and offer himself for re-election in a secret ballot. 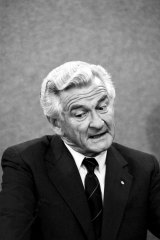 A philosophical Bob Hawke speaks to the media after being defeated in a challenge by Paul KeatingCredit:Staff photographer

He said in a letter to the caucus chairwoman, Mrs Carolyn Jakobsen, that it was now evident he faced a challenge before the Parliament rose. “I believe, in these circumstances, that it is in the interests of the party and the Government that this issue be resolved at the earliest reasonable opportunity and in the least disruptive manner.”

Mr Hawke was conceding privately that he faced defeat but lobbying continued. With defeat hanging over him, Mr Hawke faced a rugged question time and a censure motion in the House of Representatives.

Mr Keating indicated that he would take his time in reshuffling the Ministry. He left open the question whether the recently appointed Treasurer, Mr Willis, would be moved. He ruled out a spill of the whole Ministry.

Mr Hawke said he needed time to consider his future. He did not say whether he would quit Parliament. He said he would be happy to give Mr Keating the benefit of his views if he wanted them.

Mr Keating said one of his important tasks would be to restore “unity and harmony to the Government”. “It would be futile to deny the recent past has been a somewhat traumatic experience for all of us.”

He promised “no recriminations”. Over the holidays he will consult colleagues on proposals to put to Cabinet to “start 1992 with a cohesive and comprehensive plan to push Australia ahead”.

The Opposition Leader, Dr Hewson, said Mr Keating would be a more unpopular leader than Mr Hawke and would take the ALP to inevitable defeat.

Mr Hawke maintained to the end that he would have been a better bet for the 1993 election than Mr Keating. He said he had declined to accept the advice of “some of my dear friends” to stand down because he thought he had the better chance of leading Labor to victory and because the leadership was “a decision the party had to take”.

He said he believed he was leaving the country a “profoundly better place” than the one he inherited in 1983. He emphasised that “no one is more deeply hurt than I am at the current level of unemployment.”

Mr Keating’s victory is a culmination of a long struggle for the prime ministership, which destroyed the successful Hawke-Keating partnership that was the backbone of the Government for most of its time.

In June, Mr Hawke held off a challenge from Mr Keating by a comfortable margin. But he was vulnerable to destabilisation and harmed by mistakes — his own and those of close colleagues.

Yesterday’s ballot followed a war of nerves in which Mr Hawke was the one who finally made the move. Mr Keating had been unwilling to challenge without being sure of the numbers, but would probably have been pushed into it if Mr Hawke had not called for a vote.

Mr Keating has been in Parliament since 1969. He was Treasurer throughout the Hawke Government until he quit after his unsuccessful June challenge.

The Prime Minister-elect told a news conference last night: “Bob and I conducted a Government that contained two leaders. But time tells. It told on both of us in our work, in our relationship.” He said Mr Hawke had been “a great leader of the Labor Party” and had “an electoral record I will never match”.

Mr Keating declined to go into details of what changes he would make in economic policy. “All options”, including monetary policy, would be on the table. He pointed to a speech he gave in Melbourne some weeks ago which called for more stimulation of the economy to lift Australia out of recession, as indicating his ideas.

Asked about the promise he made to caucus members to abolish the $2.50 Medicare co-payment, Mr Keating would not go into detail but said he wanted to speak first to his ministers.

The Government leader in the Senate, Senator Button, a Keating backer who this week urged Mr Hawke to stand down, said last night that the Government had to make some significant changes to deal with the serious economic situation the country was in.

The Keating forces said before the ballot that they had 61 pledged votes. This suggests that several caucus members could not bring themselves to vote against Mr Hawke when it came to the point.

The Minister for Social Security, Senator Richardson, Mr Keating’s numbers man, predicted that whatever wounds were left by the leadership battle would heal quickly.

Mr Hawke said at his news conference that he had “fought the good fight. I hope your judgement will be that I fought it with dignity. The fight is over as far as Bob Hawke is concerned. I put everything I had into trying to win the fight. Now my commitment is trying to see that the new Labor Government performs well.”

He described himself as “very young and fit and a vibrant 62,” but indicated that he had no firm plans for the future. He wanted to be remembered “as a bloke who loved his country, still does, and loves Australians, and who was not essentially changed by high office.