German media fume that the Lionesses’ Euros victory ‘has a nasty, rotten smell’ and insist THEIR team were ‘the real winners’ as they sulk over penalty decision at Wembley

German newspapers was less than graceful in defeat after the Lionesses stormed to victory in yesterday’s euphoric Euros final at Wembley.

Tabloid Bild said England’s heroic win ‘has a nasty, rotten smell’ after the Ukrainian match officials waved away desperate appeals for a handball in the England box.

Its lead article read: ‘This mustn’t be true. This simply cannot be true! 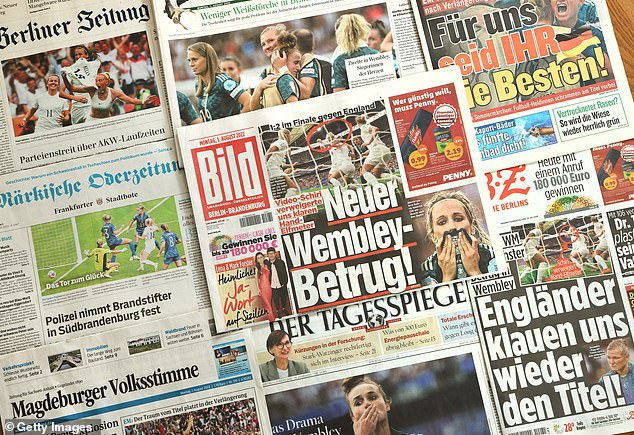 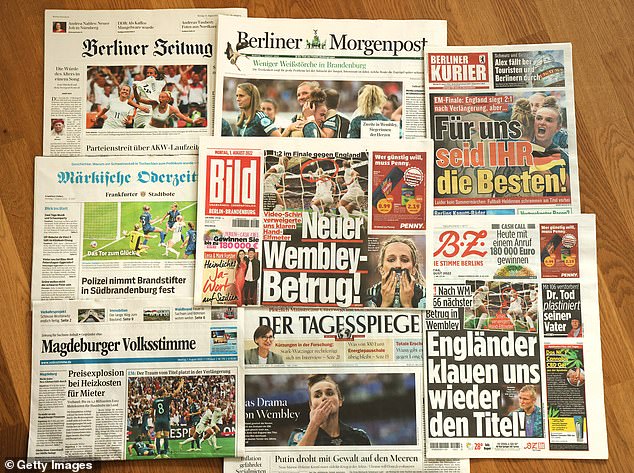 Focus magazine focused on the Lionesses’ game management in extra time, writing: ‘How bitter is this defeat! England’s hefty playing for time got tempers running high.’

’56 years after the wrongly given Wembley goal in the 1966 Wembley final, our women are again suffering a fraud in a final against England. This time despite video footage! The 1-2 after extra time has a nasty, rotten smell.’

Bild added bitterly: ‘Those who lose through fraud are in fact winners.’

Meanwhile defender Sara Doorsoun commented after the game: ‘We have [to have] the discussion again about what VAR is for.’ 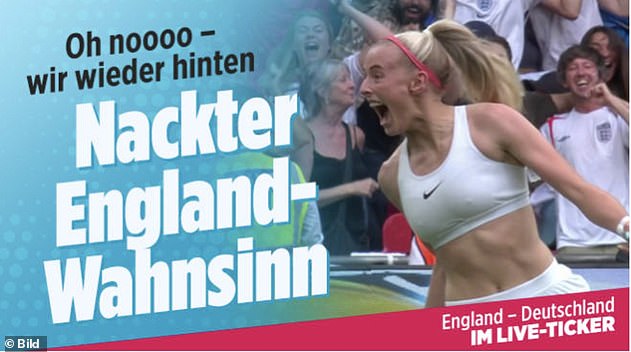 ‘Naked England madness! Oh nooo we’re behind again’: Chloe Kelly flips the script with a 110th minute toe-poke, wheeling away to celebrate with her shirt off to the shock of the Germans 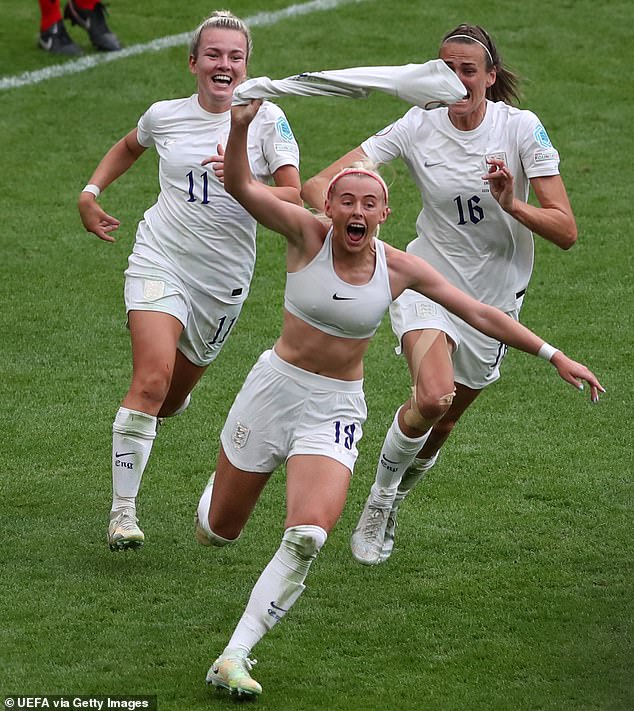 Chloe Kelly sprinted off after toeing in what proved to be the clincher in the 110th minute. She is chased down by teammates Lauren Hemp (No 11) and fellow substitute Jill Scott (No 16)

And Focus magazine focused on the Lionesses’ game management in the latter stages of extra time, writing: ‘How bitter is this defeat!

Fans at Wembley were in hysterics as Chloe Kelly toed in the winner in the 110th minute, less than ten from penalties, where – history dictates – the Germans must have been clear favourites. 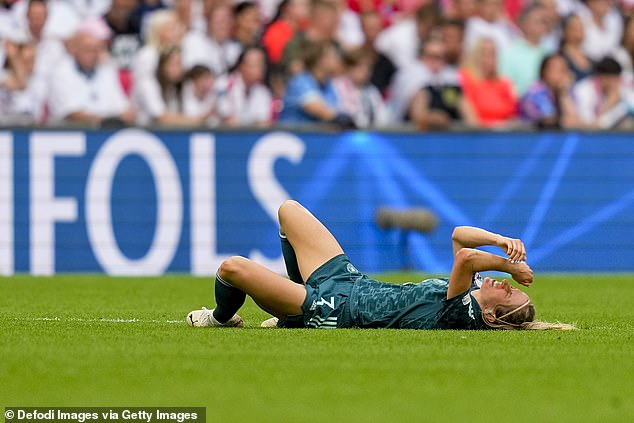 Yet Bild was quick to pour cold water on any English joy, mocking the Lionesses’ ‘Naked English madness!’ as Kelly tore off her shirt and waved it around her head.

She was booked for her troubles, but didn’t seem to care.

German coach Martina Voss-Tecklenburg also fumed that there was a ‘clear handball’ during the game in a sour post-match press conference.

But some showed class, with Der Spiegel noting it had been a ‘great final’, with the Germans ‘not going out as losers’.

It added: ‘The focus is already on the future. Something must remain of the hype.’ 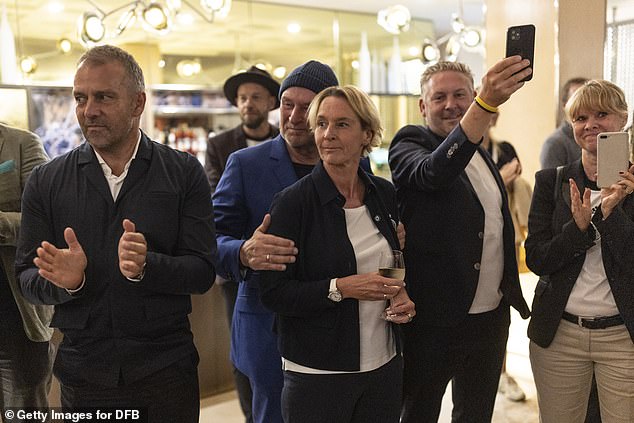 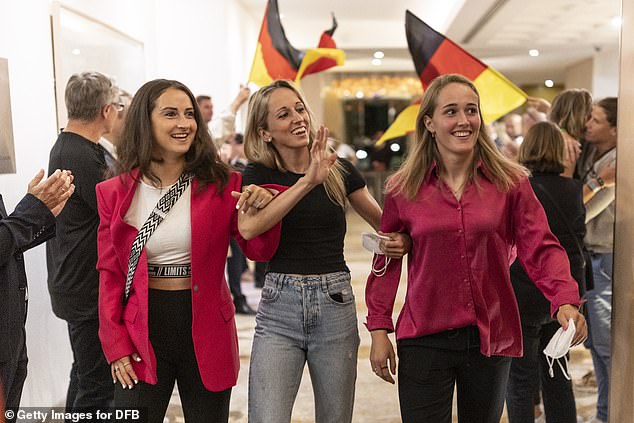 Players Sarah Dabritz, Kathrin Hendrich and Sydney Lohmann of Germany arrive at a commiseration dinner at Wembley after their team’s defeat in extra-time yesterday evening

Regardless the Germans’ efforts to belittle their incredible win, the Lionesses became the first England side to win a trophy since the iconic 1966 team captained by Bobby Moore.

The Queen heralded the heroines’ ‘significant achievement’ as going ‘far beyond the trophy’ alone.

In a message posted minutes after the victory and signed ‘Elizabeth R.’, the monarch wrote: ‘You have all set an example that will be an inspiration for girls and women today, and for future generations.

‘It is my hope that you will be as proud of the impact you have had on your sport as you are of the result today.’

Minute by minute, this is how expectation and enthusiasm turned to excuses and incredulity as – for once (or twice) – England beat Germany to bring home a trophy… 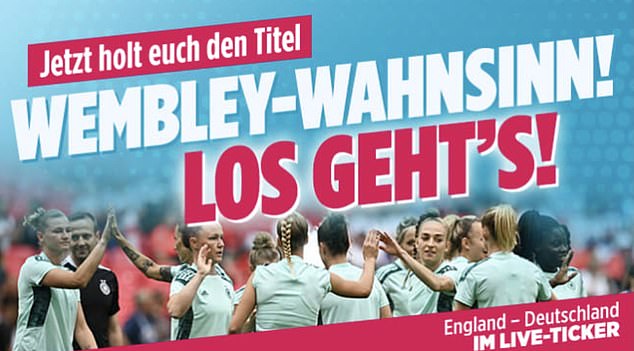 ‘Now get a title. Wembley madness! Here we go’: Germany are full of confidence going into the game as their team have never lost a Euros final, and have never been beaten by England in England before Sunday night 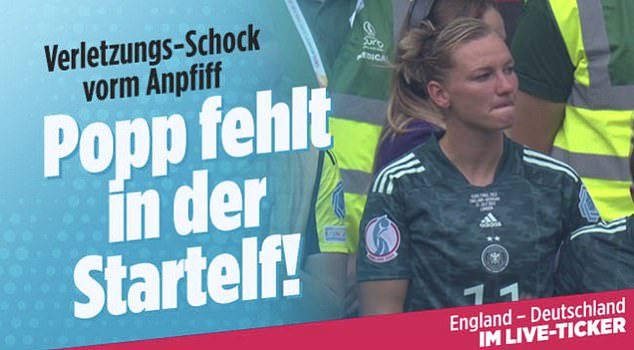 ‘Injury shock before kick-off. Popp is missing from the starting 11’: Early doubts creep in as team captain and top goal-scorer Popp is benched after an injury in the warm-up 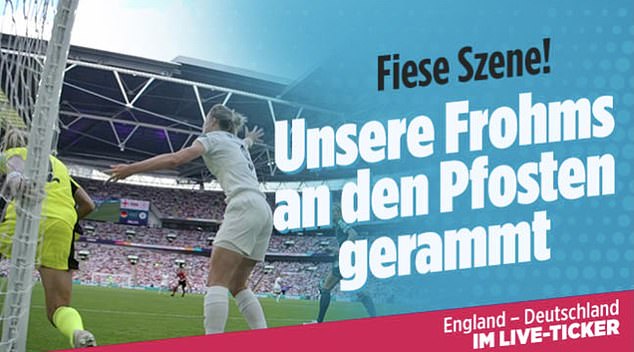 ‘Nasty scene! Rammed our Frohms against the post’: Ellen White is admonished for a shoulder-barge on the German ‘keeper as an early first-half chance goes begging 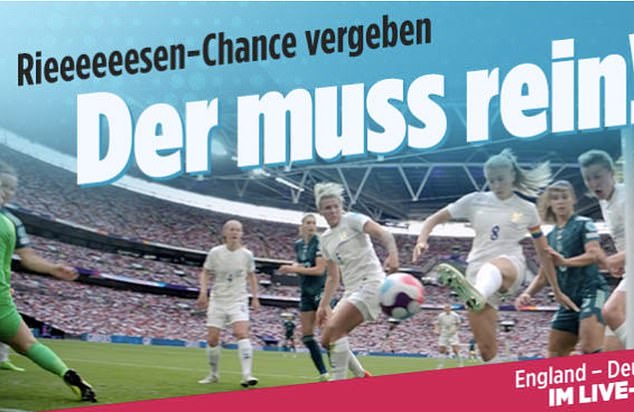 ‘Huuuuge chance missed. It has to go in!’ Germany come close to scoring in the 26th minute as Leah Williamson clears off the line – with VAR ruling out a penalty shout for handball 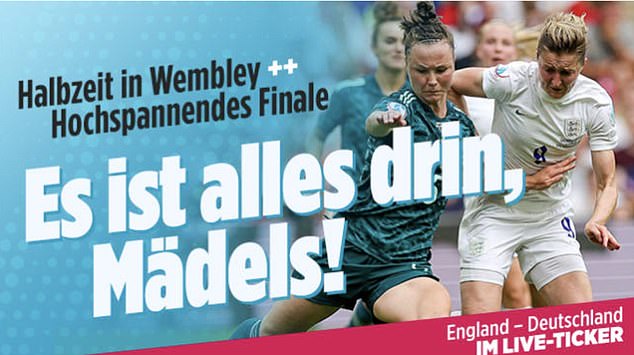 ‘Halftime at Wembley. Exciting finale. It’s all in there, girls’: With no mention of the handball call, Germany remain enthusiastic about their chances as the half ends 0-0 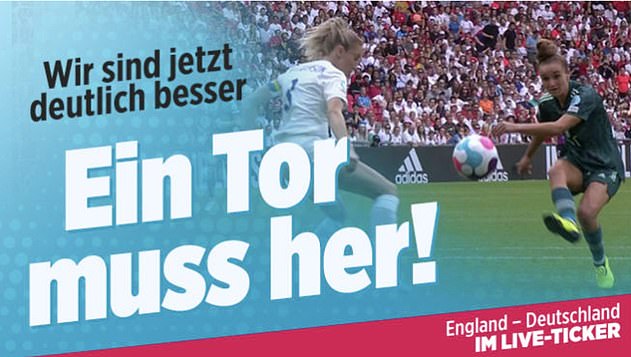 ‘We’re a lot better now. A goal is needed’: Germany started the second half much brighter, leading to that familiar feeling on both sides that England’s hopes were about to be dashed 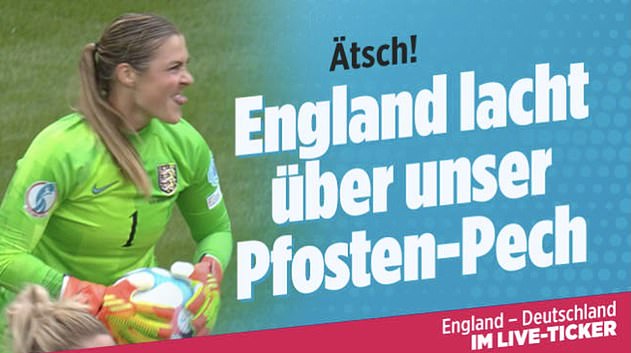 ‘Argh! England laugh at our post bad luck’: Germany rue their misfortune after hitting the post, but with a palpable sense that the winning goal will not be long in coming 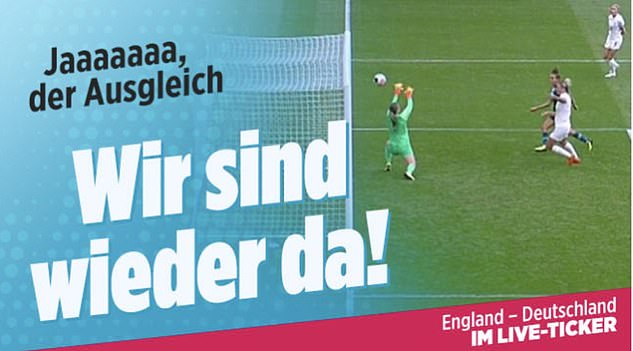 ‘Yeeees the equaliser! We are back’: Ella Toone beautifully lobs the German ‘keeper to make it 1-0 before Lina Magull strikes back to make it 1-1. Guess which goal made headlines over there? 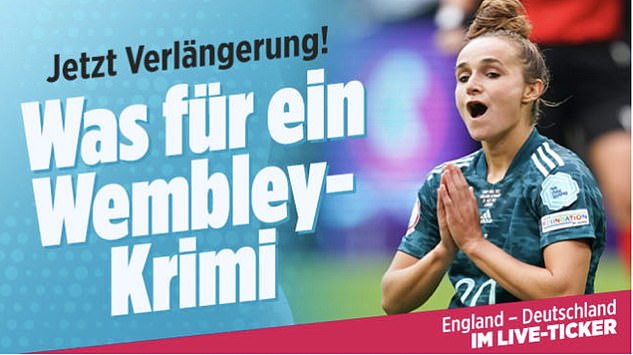 ‘Now extra time. What a Wembley thriller’: The Germans remain bullish about their chances as extra time comes with the score 1-1. We’ve seen this all before, haven’t we? 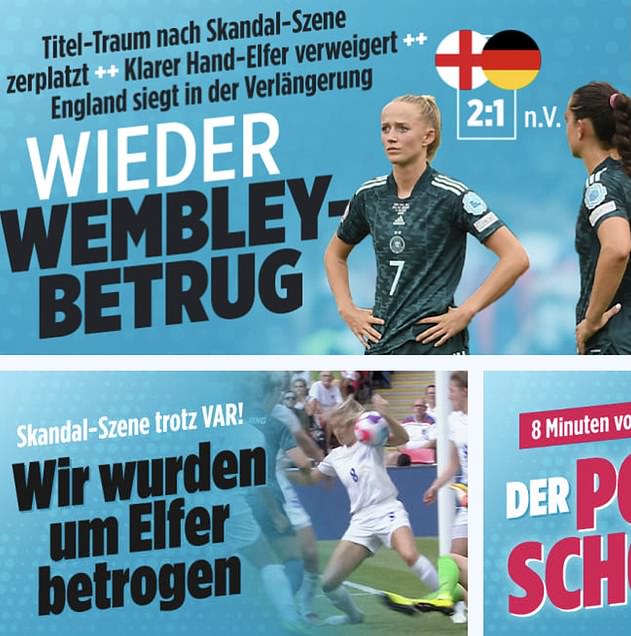 ‘Wembley cheating again! Title dream is burst after scandalous scene. Clear hand ball penalty denied. England wins in extra time’: And so to the excuses. The largely-unremarked handball shout is now ruled pivotal. England cheated. How else could we have won? 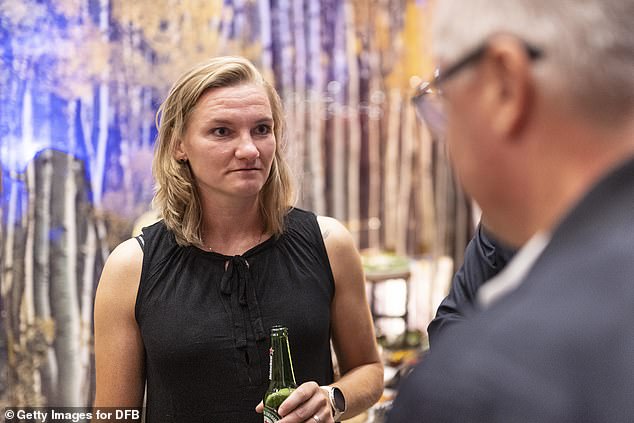 Alexandra Popp, Germany’s captain top goal-scorer at the Euros who was forced to sit out the match due to injury, is seen at a banquet after their defeat